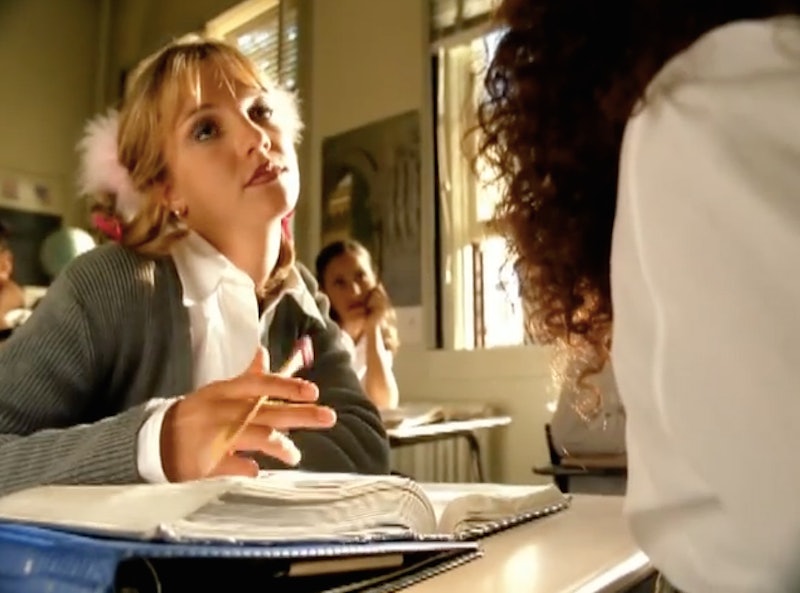 In author John Seabrook's new book, The Song Machine: Inside the Hit Factory, the origins of Britney Spears' "Baby One More Time" have been revealed, to clarify, well, that whole "hit." Apparently two Swedish songwriters wrote the lyrics and thought that "hit" was synonymous with "call." Therefore, the lyrics are supposed to be interpreted as "call me baby one more time," with Britney basically being phone-dodged like she's an Adele song or something. So, finally, the mystery revealed, but that doesn't clear up the rest of Britney's discography.

Now, I know we can tackle only one Britney mega-hit at a time, and I'm glad that we started with this one. As a young, impressionable lass, I remember seeing my classmates violently (but playfully) smack each other to the tune of "...Baby One More Time," and it's really important that this is about something much more innocuous. Regardless, I think we need to seriously re-evaluate the rest of her hit singles. And, I mean, if you won't, I will.

So to the best of my expertise, here is a quick rundown of what Britney's best tracks must be about.

This is about the time Britney's manager took her to a house in the country to rest, and she was locked up in a room with strange yellow wallpaper. There she slowly grew mad, until it culminated with her tearing apart the paper and crawling around the room. It's also a core part of the soundtrack for the Melissa Joan Hart movie of the same name.

"Played with your heart?" "Got lost in the game?" Um, this is very clearly about the time that Britney cheated at Operation.

Obvious, isn't it? "Lucky" details timeless tale of money not buying happiness, the starlet in the song an avatar for Britney's own crippling unhappiness as she grows up in the harshness of the spotlight, never once getting a moment to shield her eyes. Oh, no, wait, just kidding guys, this is just a song about a girl named Lucky. It's like right there in the lyrics.

I think this is about that phase in your life when you're like 14 and keep breaking out, and you figure that, if you just hibernate for the next few years, you'll emerge a beautiful, clear-skinned butterfly. It's a lie, though, because the world is a cruel place, and zits never go away.

I'm actually not sure. I just know it makes me want to dance.

All right, maybe a few of these might be off the mark (maybe) but I guess we should just celebrate the win behind Hit Me Baby One More Time and call it a day.