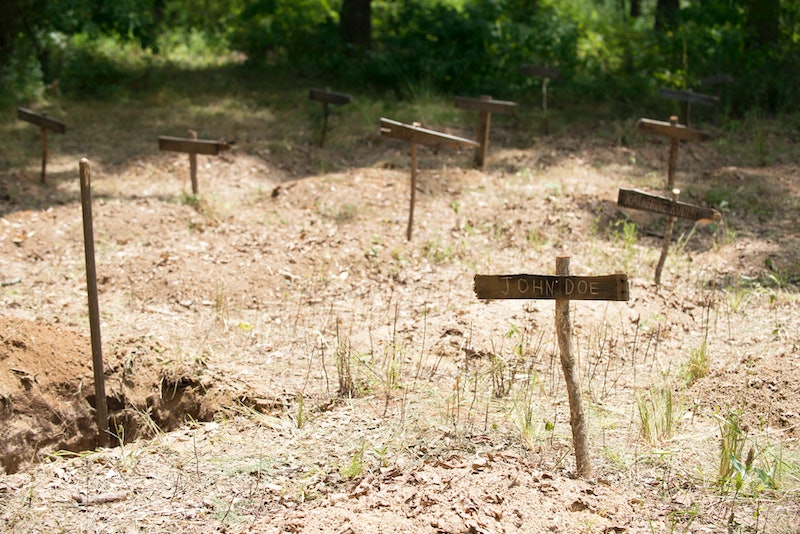 While we all huddle under our blankets in fear that The Walking Dead will put off the resolution to Glenn's potentially lethal fall for yet another week, let us take solace in that fact that everyone involved with the series is being super shady about it. Is Glenn really dead on The Walking Dead ?

I mean that in the best way — if he was for sure dead, they'd say so. Right? Sure, Steven Yeun's name was missing from the credits last Sunday, but there are trolls everywhere. I have thought way too much about intestines and grey tee shirts over the past two weeks, and I do not want for that to have been in vain. Glenn Rhee's story absolutely can not be over. The first word on Glenn's death came from executive producer Scott Gimple during The Talking Dead following the episode. This was his official statement, as delivered by Chris Hardwick:

Dear fans of The Walking Dead, This is a hard story to tell, and when we were planning to tell it we knew our friends at Talking Dead would be talking to you about it, and knowing you’d all be talking and feeling and commiserating, I kew we should say something about it, lest our silence say something we didn’t mean to say or not say, so I’ll say this. In some way, we will see Glenn, some version of Glenn, or parts of Glenn again, either in flashback or in the current story, to help complete the story.

What have the actors and producers have to said about the possibility of Glenn ceasing to be on The Walking Dead? Here is a roundup of quotes for us to cling to while we wait. If you thought that statement was vague, just wait to hear how Gimple expanded upon that in an interview with The Hollywood Reporter. "We will complete the story," he said. "That's the important thing. That's what people are feeling, and it will be this half of the season."

When asked if it was all a dream or a hallucination, Gimple said "everything onscreen we see is information for the viewer one way or the other... Some of those theories could be correct. I read all sorts of things about this, and some of it is right and some of it is wrong. But I love that people are this passionate and engaged and are looking at this like a CSI thing. It's incredible. But back to Nicholas: He did put a gun to his head. We did hear a trigger go off and we saw a lot of blood go. I'm a lot more comfortable saying Nicholas is dead." This is all very promising, so let's move on.

Additionally, in a post mortem interview with TVLine, Gimple insisted that "we’re still in the middle of the movie" and "it was shot the way it was shot and it was edited the way it was edited and that is always deliberate. I spend a lot of time on these cuts, so take that as you will." Good, we will. Greg Nicotero, in an interview with Yahoo, also said that the scene was choreographed with specificity, but said that "as gut wrenching as it is to be put through this, I’m very delighted that the audience is going on this journey with us." Gut wrenching?! Is that some kind of sick pun?

TWD producer David Alpert said similarly in an interview with Variety that "I feel like, regardless of what happened to Glenn, he paid a tremendous price for having been human to Nicholas, and that, to me, from an emotional point-of-view — whether or not Glenn is alive or dead or something else — the Glenn that we knew, the one that believed in the better side of humanity, I think is dead." Hmmmmm, those signs could point to either living or walker. Alpert also told MTV in an otherwise similar interview that "if this is a big thing and I’ve gotten the amount of, 'hey Alpert, we hate you,' emails and texts that I’ve gotten this morning, I just can’t wait to see how my phone just shuts down come the end of the season." Yikes.

Finally, the actor Steven Yeun seemed frustrated by the extra attention and the way fans have of watching shows like this as if it were a reality/competition series.

"If it serves the story, I’m game for anything. I hope people can watch the show in that same regard. Stop watching it to see if your favorite character is still alive. That’s kind of been on my mind lately because you notice a lot of fans saying 'we want you to live, or we want this person to die' and it’s like, that’s not what the show’s about."

He has a point. I'm looking forward to re-watching last Sunday's Morgan-centric episode when I'm not so worried about Glenn's fate, because it really was excellent storytelling. So there you have it. As miserable as the waiting is, there is no doubt that this show is not 2460-done with Glenn Rhee.