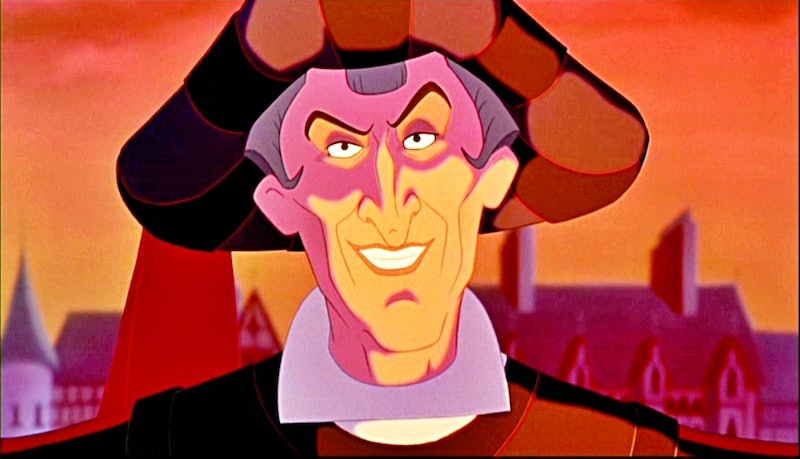 Disney movies have always been a staple in my house. Dad took me to see Beauty and the Beast for my eighth birthday, and the tradition continued after that. Trouble is, as I'm sure most of you are aware, not all Disney films are grounded in a reality we can feel good about. Not only is sexism often ripe, but other issues that might not have seemed obvious to us as kids are suddenly problematic when we re-watch the movies as adults. And there are some really creepy things in Disney movies when you start looking close enough.

As the films have aged, so have their fans. And with that has come a million re-imaginings of Disney princesses if they'd aged appropriately, or Disney princesses recreated as warriors. The love for Disney movies has truly shone through in the amount of re-imaginings surfacing on the Internet weekly. But what about those creepy moments that we can't quite shake from our brains now that we're grown-ups? Why does the Beast expect Belle to treat him like a date when he's keeping her prisoner in his house? Why does Ariel have to become a mute in order to woo her Prince? This and more, we must examine immediately.

Because the truth is that Disney movies will always have a special place in our hearts, so these things are going to keep jumping out at us when we re-watch our favorite movies for the hundredth time. We need to acknowledge them so the healing can begin.

1. Stockholm Syndrome In Beauty And The Beast

"For who could learn to love a beast?" A woman who's held hostage in his castle against her will, that's who. In Beauty And The Beast, Belle appears to develop sympathy for her captor throughout the movie, even believing that she understands him, and that perhaps he isn't as bad as everyone thinks. Classic Stockholm Syndrome, and a dangerous message to women about men who are mean to them.

2. Misogyny In The Little Mermaid

Not only does Ariel have to trade her voice for legs, but she also has to leave her family and friends behind forever once she marries Prince Eric, abandoning her heritage as a mermaid, and focusing only on fitting into her husband's world. A husband, might I add, that she barely knows and has hardly spoken to before they marry. Why he has to sail her far, far away on his boat is another pertinent question.

3. Creepy Sexual Obsession In The Hunchback Of Notre Dame

Frollo, the Archdeacon of Notre Dame, has a legitimately creepy obsession with heroine Esméralda. He even goes so far as to issue the ultimatum, "Choose me... or the fire!" With death threats this serious, it's a wonder that Esméralda managed to trust anyone ever again. Of course the prospect of burning to death and/or finding a way to save herself was hugely more attractive than a lifetime with her stalker.

4. That Unspoken Foot Fetish In Cinderella

Prince Charming sure has to touch a lot of women's feet in his search for the owner of the glass slipper. Does he have a foot fetish? Or is he just braver than I am, and doesn't have a problem touching copious amounts of feet? Either way, the foot focus creeps me out, and I'm sure I'm not alone. Just sayin'.

Generally regarded as a bad idea, the fact that both Snow White and Sleeping Beauty can only be woken by a kiss from a Prince smacks of misogyny. Wrong on so many levels. In Just Like Heaven, Mark Ruffalo and Reese Witherspoon showed the complications that ensue when you try making out with a lady in a coma. It's just not the done thing.

6. A Puppet Comes To Life In Pinocchio

I repeat, a puppet comes to life. Which part of that sentence doesn't scare you?

7. Everything In Toy Story 3

OK, so Toy Story 3 is technically Pixar, but it was released by Walt Disney, and has made it into the list as a movie that legitimately terrifies people. Sure, some of the film was intentionally scary, but, as a grown-up watching it, I was borderline scared by some of the images thrust into my face in 3-D. Especially the monkey: truly what nightmares are made of.

Regardless of the amount of creepy moments that can be found in Disney films, I still return to these movies again and again. Perhaps they're not perfect templates for how to live life, but they're childhood classics, and sometimes you have to overlook faults in the name of love. Still, it's probably healthy to revisit these stories with a discerning eye as a grown up, right?

More like this
15 Intriguing Movies On Netflix That Are Based On True Events
By Mary Kate McGrath, Shannon Barbour and Grace Wehniainen
18 Unanswered Questions From 'The Hills' That Still Haunt Us Today
By Ivana Rihter
Everything To Know About 'My Big Fat Greek Wedding 3'
By Grace Wehniainen
Alicia Silverstone Has Recreated An Iconic 'Clueless' Scene
By Frances Stewart
Get Even More From Bustle — Sign Up For The Newsletter