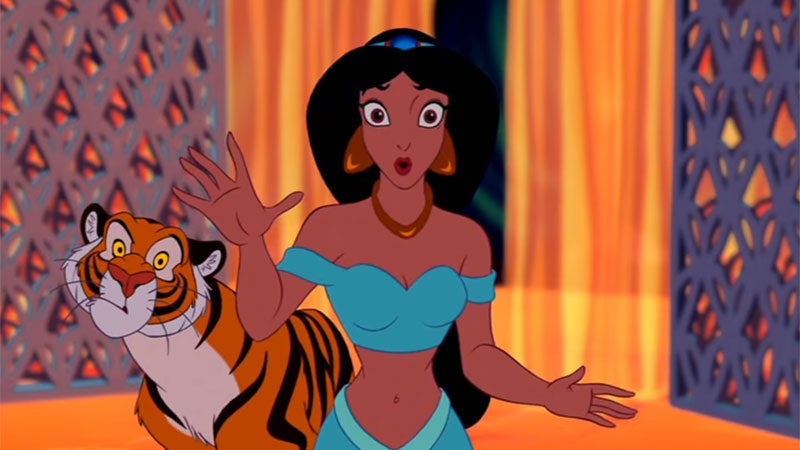 Fact: More than 20 years after some of my favorite Disney movies were released, I'm still obsessed with them. Whether it's listening to Judy Kuhn sing "Colors of the Wind" in tribute to Pocahontas, hearing misheard lyrics to classic Disney songs or watching incredible Disney mashups, I can't get enough. It only makes sense that I would dig up some obscure trivia from the House of Mouse to fuel my love. Like many children who grew up in the '80s, I can recite pretty much any Disney cartoon word-for-word. (That includes the musical numbers.) However, in my research, I was surprised by how much I learned. For instance: Ariel and Hercules — possibly related? Mind blown.

While I have no doubt that Disney villains can be pretty darn stylish, I didn't know that Jafar makes an unofficial cameo in Hunchback of Notre Dame. (In my opinion, he ends up getting exactly what's coming to him.) Nothing can quite compare to the surprise of seeing the Disney princesses wearing IRL makeup, but I'm willing to bet these facts are pretty close.

If you're Disney-obsessed (and, really, who isn't?), then you need to test your classic movie trivia and check out these unexpected things hidden in the iconic films.

1. Ariel and Hercules Could Be Related

If we refer back to Greek mythology. Poseidon is the brother of Zeus and the father of Triton. In The Little Mermaid, Ariel is Triton's daughter, and Hercules is Zeus' son, making Hercules the uncle of Ariel.

2. Belle Is the Only Disney Princess with Hazel Eyes

All of the other leading ladies either have brown or blue eyes.

3. Aladdin Has a Poker Tell

Whenever he lies, the feather on his turban falls in his face. (On a similar note, the strand of hair that falls in Belle's face was intentionally included to show that she's not perfect.)

5. Jafar Makes a Cameo in Hunchback of Notre Dame

Yep, the old prisoner in the movie looks exactly like Jafar's disguise in Aladdin. Serves him right for wanting to be an all-powerful genie.

She can be seen in the constellation during the "Zero to Hero" musical number.

Animators used cosmetics to achieve an authentic complexion for the Disney princess.

The vender at the beginning of the film was originally intended to be revealed as the Genie. (Note that both characters only have four fingers!)

9. There's a Hidden Disney Princesses in Enchanted — Sort Of

Enchanted features a cameo from the voice of Ariel: Jodi Benson.

The china set from Beauty and the Beast is seen in Jane's camp.

11. A Toy from Mulan Can Also Be Seen in Tarzan

The plushie belonging to Mulan's Little Brother falls out of Professor Porter's pocket.

More like this
Lindsay Lohan Just Recalled A Hilarious 'Parent Trap' Story
By Sam Ramsden
The 'Love Actually' Reunion Is Missing A Major Player
By Bustle UK
How The Thanksgiving Episode Of 'Gossip Girl' Changed Pop Culture History
By Gabrielle Bondi
You Definitely Know The Voice Of Shuri's AI In 'Black Panther: Wakanda Forever'
By Brad Witter
Get Even More From Bustle — Sign Up For The Newsletter