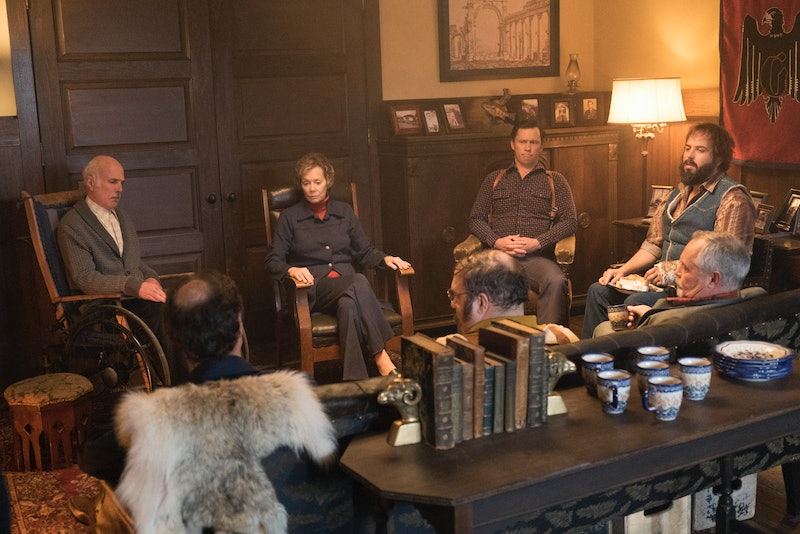 Fargo is a show that is all about details, yet it leaves out some pretty key facts about its characters. We're not sure what type of cancer Betsy has, how Ed and Peggy got into each other's lives, and what the heck is going on with those aliens. One of many details we don't know is what the Gerhardt crime family does on Fargo to keep making money. We know that they are a family and that they commit crimes, but other than that we have yet to see them do anything that would bring in a revenue stream.

The Gerhardts are busy going to war with the Kansas City Mafia, which means business-as-usual will have to be placed on hold for a bit, but what does an average day of work look like for the Gerhardt crime family? There have only been a few mentions of the non-administrative aspects of being a part of a crime family, but it's likely that the Gerhardt crime family isn't unlike other crime families and participate in organized crime ranging from car theft to drug distribution and beyond. Here are some clues that help the audience figure out how far-reaching the Gerhardt's influence on Fargo is, as well as some guesses as to other aspects of their business.

The illegal drug industry is where a lot of the big money in crime comes from. As of 2003, The UN estimated that "the global drug trade generated... 321.6 billion [dollars] in 2003." To get drugs from the manufacturer to the customer, distributors function much in the same way they do in legitimate business, in that they focus on transporting goods. During a conversation Lou Solverson and Ben Schmidt, Solverson remarks "Distribution, right? Gerhardts." To which Schmidt explains that the family started off generations ago "Runnin' booze during Prohibition. Ended up building a truck empire." It's implied that the Gerhardt's control all the shipping and distribution routes for illegal goods in their corner of South Dakota, making them a powerful force and a valuable asset for the Kansas City Mafia.

Gambling is a very popular revenue stream. For example, the real life 'Ndrangheta Mafia made $1.4 billion from gambling in 2013, according to a study by the Demoskopika research institute. And, according to CNBC, upwards of "70 billion dollars is illegally wagered on college football each year" in America. In Fargo, the in-over-his-head typewriter salesman Skip is in debt to Rye Gerhardt, and the family at large, over some gambling debt. The attempts to pay off that debt lead to the fateful Waffle Hut shooting that kicks of the events of the season.

There's a lot of money in stolen cars. In fact, one of the major plot points of the original Fargo film was a missing Tan Sierra that led to the discovery of the kidnappers. Automobile Theft is also a popular hobby or organized crime groups, like Carmine "The Bull" Agnello of the Gambino crime family who was convicted of a $3 million scam utilizing automobile theft and selling them for scrap metal. In Fargo, Hanzee and Dodd manage to get their hands on a giant dump truck filled with dirt to bury Skip alive, and it's unlikely they paid for the truck and the dirt on their own.

No no, racketeering is not a term for underground, illegal tennis. Racketeering "is when organized groups run illegal businesses, known as “rackets,” or when an organized crime ring uses legitimate organizations to embezzle funds." There aren't any clear examples of what the Gerhardt family does to embezzle its money, but that typewriter shop likely didn't do a great deal of business without some Gerhardt assistance at one point or another.

While South Dakota may be a fairly barren state that not many consider to be a hotbed of criminal activity, the Gerhardts' criminal monopoly over the area makes them a powerful force and a big target for a syndicate such as the Kansas City Mafia. The Gerhardts seem to have their hands in everything, but will they be able to maintain any of it after the looming Sioux Falls Massacre? Only time will tell.