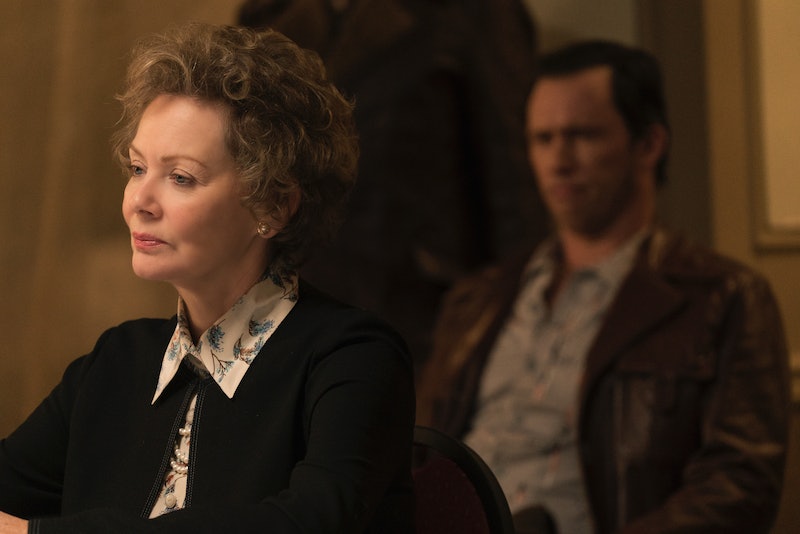 Gird your loins, everyone. In the world of Fargo Season 2, the United States of America may only have recently extricated itself from the quagmire that was the Vietnam War. But in the snowy Midwest, another war is about to breakout: a no-holds-barred fight-to-the-death between the Gerhardt crime family of North Dakota and the corporate mafia of Kansas City, Missouri. Knowing that this season is building towards an event referred to in Season 1 as the "Sioux Falls Massacre," we knew it was only a matter of time before the delicate detente between these two factions was shattered. And that moment came in this week's episode, "Fear And Trembling," when steely matriarch Floyd Gerhardt officially declared war.

For a while there, it looked (however foolishly) as though the fragile peace might hold. Although it was never likely that Floyd would acquiesce to Joe Bulo's request to buy the Gerhardts' operation outright, she came back to the mob manager with a reasonable offer: a partnership. Instead of taking Kansas City's money and ceasing work entirely, the Gerhardts would instead pay money for the privilege of continuing to work alongside the newcomers. But not everyone was happy with this proposal — including Floyd's eldest surviving son, Dodd.

Dodd already felt cheated that his mother had taken over the business after his father Otto's stroke, rather than letting things pass rightfully to him. He certainly wasn't going to stand by and watch as his mother sold his birthright to some suit-wearing thugs from Missouri. So Dodd (who we learned in the opening scene became a killer at a tender young age) set about sabotaging his mother's plan before it could even come to fruition.

With his nephew Charlie in tow, Dodd cornered two Kansas City henchmen in a donut shop and proceeded to beat the living shite out of them, zapping them into oblivion with a cattle prod. So when Floyd calmly laid out her counteroffer to Joe, he had a ready excuse to turn it down: it was clear that her son was never going to roll over and show his belly. He was never going to let Kansas City roll into town and take over half his father's operation. He was never going to coexist peacefully alongside men he viewed as having stolen his inheritance.

In fact, while Floyd was occupied at the negotiations, Joe took the opportunity to retaliate against Dodd's violence. He sent Mike Milligan and the Kitchen brothers to intercept Otto at his doctor's appointment, where they slaughtered all of the stricken man's bodyguards — and even his nurse — but left Otto himself sitting cold and helpless in the parking lot. They didn't kill the Gerhardt patriarch... but they certainly made a statement that they wouldn't tolerate anymore foolishness from Dodd or any of the rest of his family.

But this was too much for Floyd. After four episodes of trying her best to avoid a bloody conflict, she finally capitulated to what Dodd had wanted all along: a war. It seems unlikely that the homegrown Gerhardt operation will be able to withstand the merciless corporate machine of the Kansas City mafia — but they'll be damned if they don't go down trying. Surely they don't refer to it as the "Sioux Falls Massacre " for nothing.