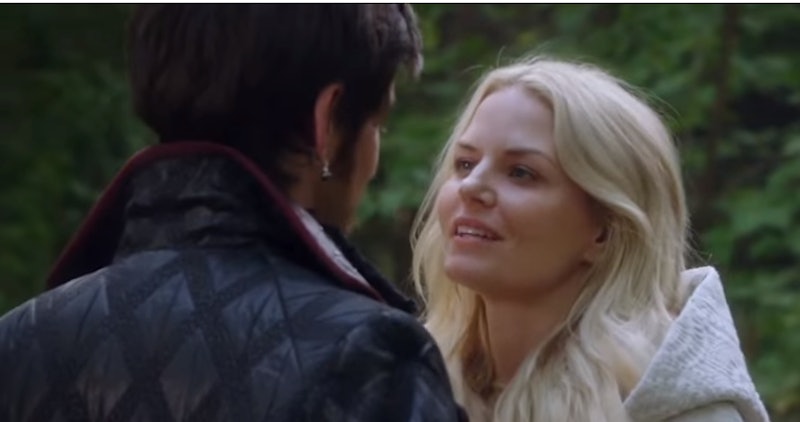 As we move deeper into the mythology of the Dark One on Once Upon A Time Season 5, we're also jumping back and forth in time, from present day Storybrooke to a six week sojourn to Camelot that's been wiped from everyone's memory but Emma's, thanks to her Dark Curse. It's meant that the audience gets to discover what exactly happened in the Enchanted Forest sometimes even before those involved actually remember/are informed. One of the big blank areas has to be the whole Captain Swan fiasco — and let's be real with each other, that relationship is nothing if not a fiasco — and why exactly Hook was all too happy to jump ship from the partnership once Emma refused to be the Savior he'd fallen in love with and demanded her to continue to embody. We may not get that answer in this Sunday's episode, "Nimue," but we will be fed some Very Real Proof about how much they love each other in some Camelot flashbacks.

If you think I'm being harsh on the pairing — which, let's be clear, I'm aware has a massive mainstream following, because the heart wants what it wants and Colin O'Donaghue is devilishly handsome — it's perhaps just because I don't really "get it." The writers have fed us a load of boloney about how Emma and Hook are meant to be together because Hook pursued Emma relentlessly until she finally gave in to his persistent harassment and turned into a giggly school girl (i.e. not like herself at all). Not only have we seen True Love's Kiss not work for them on multiple occasions, but we also saw how Super Great Boyfriend Hook suddenly decided he couldn't be bothered anymore now that Emma has an agenda of her own and doesn't put him above whatever big plans she's got as the Dark One. You'll pardon me if I'm not jumping for joy at having them shoved down my throat week after week.

But I digress! "Nimue" promises to show us some tender moments between Emma and Hook back in Camelot, where they kiss passionately and Hook even gives Emma a ring that helped save his life in one way or another. Basically, it's his good luck charm and he wants Emma to have it, which is actually a pretty sweet gesture. Emma, by the way, is standing around batting her eyelashes and calling him "babe," which is totally realistic, considering the biggest term of endearment she has for her own son is "kid." But anyway, they love each other, Emma's immortal, and she's going to flit off with Merlin to find the spark to re-forge Excalibur and the dagger, and then she's going to be free and I guess Hook and Emma can go hold hands and frolic on a mountaintop in celebration of their love.

Except, of course, we know that never happens. We don't even know where the ring ended up getting to — there's certainly been no mention of it, and the biggest thing we've seen Emma get emotional over as the Dark One is Regina's dreamcatcher, so something tells me she didn't hold Hook's ring dear enough to her heart or that perhaps it got lost during her escapades with Merlin, which will likely end up failing. I'm not at all suggesting that Emma doesn't love Hook in many ways, nor am I saying that I can't stand Hook (though honestly, he was so much better when he wasn't pretending to be some redeemed hero and was just the total bastard he's meant to be). Plus, Hook will have a big arc later this season, so I doubt this is the last we'll see of Captain Swan, so try not to get too upset if they're your OTP.

So what's the significance of the ring, and what ends up happening to it? Something tells me we're supposed to care about that, because it'll definitely be back later this season in one way or another. Once is doing important stuff this season in trying to be inclusive in terms of 'ships, which I can appreciate. I'm Swan Queen 'til I die, and Episode 5 was basically my heaven, but Rumbelle, Captain Swan, Outlaw Queen, and Snowing have each had their moments. We all like different things and connect with different people, so I'm all for it... I just wish they'd realize that for Emma and Hook, things just aren't working.