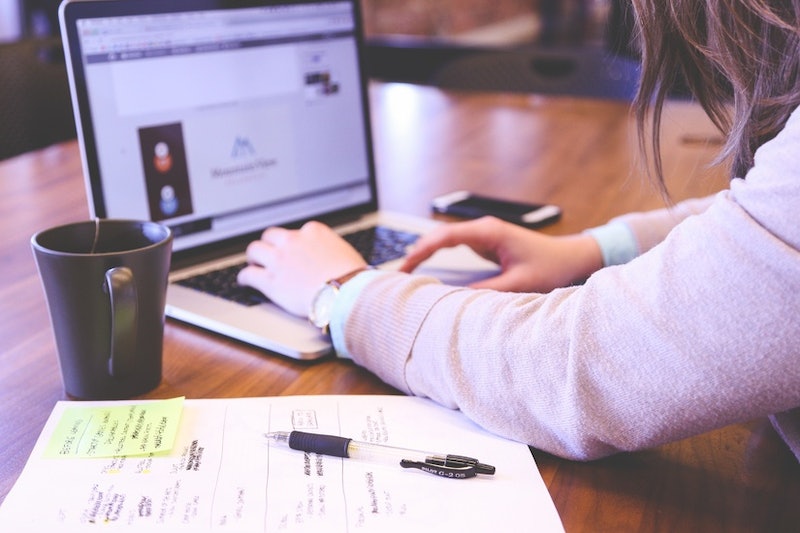 It's no secret that asking for a raise can be difficult. Talking about money is often considered taboo, and it's awkward to put yourself in a position where you have to confidently discuss your accomplishments without coming off as too cocky. Knowing how to ask for a raise as a young woman is even more difficult, even in 2015 (if you don't believe me, I highly recommend you read Sheryl Sandberg's Lean In). Workplace inequality is still very much a thing, and we are living in a world where women are called "bitchy" for coming across as in charge and confident. So how are you, as a young woman, supposed to ask for a raise — and actually get it?

A few weeks ago, I found myself in this position at my current place of work. My boss was leaving, and they weren't hiring anyone to replace her — meaning I would be taking over a good amount of her responsibilities. I knew I would have to ask for a raise, because I knew it wasn't going to be handed to me.

In the days following up to my meeting with my new boss, I told my close friends and family members that I was going to ask for a raise for the first time ever. Many of my female friends and family members, including my mom, said things like, "How are you going to ask? What are you going to say? Are you nervous? Do you think you'll get it?" The men in my life, including my boyfriend and my dad, did not do this. My dad said, "You deserve it." My boyfriend nodded as if asking for a raise was the only logical thing I could do (it was), and wanted to know how much I was going to ask for. When I told him, he said, "Why not more?"

These interactions made me realize just how nervous a lot of women are to speak up and take control this way at work. But, I know that I'm a very hard worker and I'm good at my job. I knew I deserved what I was asking for, and I was pretty confident that I would get it.

After asking for my raise, and getting it, I realized that doing so really isn't as bad as you might think it is. I am by no means an expert, but hey, these tips just worked for me. So, here is how ask for a raise — and actually get one.

1. Go above and beyond

Of course, you should always be doing your best work, but it's good to show that you take your responsibilities seriously in the weeks before you ask for more money. In my case, I was given new responsibilities before I asked for my raise, so I waited a week to actually do those things successfully before I spoke to my boss. I could have asked him before doing anything, but waiting a few days proved that I was capable of the position.

2. Ask for a face-to-face meeting

This probably sounds like an obvious tip, but in today's world where we all spend so much time on the computer, I wouldn't be surprised to hear of an employee asking for a raise via email. Never do that! I know it's uncomfortable, but you have to do it face-to-face. And plan the meeting ahead of time. Don't just poke your head in your boss' office and say, "Hey, do you have a minute?" Planning the meeting in advance shows you are taking initiative, and planning things out. It also automatically makes the meeting seem more formal.

3. Practice at home if you're really nervous

If just thinking about asking for a raise makes you break out in hives, then get through it by first practicing at home. Think of what you're going to say, or even write yourself a little script. You can practice by simply looking in the mirror, or you can do a little role-play with a family member, friend, or significant other. Going through what you're going to say with another person may help ease your nerves — and then you can also get their advice.

Think about what you've achieved since you started, or since your last raise. Mention the biggest, most important things. You don't need to go through a whole list, but you do need to remind your boss that you deserve this.

This is a tip I got from the book Lean In by Sheryl Sandberg. Sandberg talks about asking for a raise, and advises readers to use the "we" pronoun instead of "I." She says, "A woman's request will be better received if she asserts, 'We had a great year' as opposed to 'I had a great year.'" Why? Sandberg says reminding your boss that you are part of a team increases your chances of getting the raise.

6. Mention how much you enjoy your position, or how excited you are for your new responsibilities

If you go into this meeting acting like you hate your job and need this raise just to get through it, you're probably not going to get it. But if you go into the meeting with a positive attitude, and explain how much you enjoy your position and want to continue to achieve success at the company, you have a better chance. My former boss advised me to say, "I love my position, and I'm so excited to take on these new responsibilities. But I do feel that I deserve to be compensated for the extra work." That's exactly what I said, and hey, it worked for me.

7. Ask for more than what you think you will get

8. Look your boss in the eye, and speak clearly

If you're shy like I am, then talking to people in a confident tone while looking them in the eye is basically torture. Looking someone in the eye is a constant struggle for me, and I have a tendency to use a lot of filler words such as "like" and "um." Avoid these words. Look your boss in the eye. Be as confident as you can be. Body language is important.

9. Realize this isn't the time to be humble

When giving me advice on asking for a raise, a former boss said to me, "This isn't when you should be humble." She knew I was the kind of person who downplayed her achievements at the risk of sounding braggy. Like many women, I have the tendency to say things like, "Oh, I couldn't have done that without the help of X." I also have the habit of not being able to accept a compliment without pointing out something bad about myself, and to apologize when I say something good about myself. But now is the time to talk yourself up.

Don't say things like, "I don't want to toot my own horn or sound like I'm bragging, but..." Don't remind them of past mistakes by saying something like, "I realize I messed up with X, but I still think I did other great things." Be confident!

10. Don't compare your company to other places, or give an ultimatum

A former boss once told me that if one of her employees asked her for a raise by saying, "Well, I heard that Random Company pays their employees in the same position as me 30 percent more," she would suggest they apply to that company. You might think that saying stuff like that is part of a negotiation, but it actually comes off as negative and kind of immature. It also doesn't make you seem like a team player.

You should also avoid saying something like, "I want 20 percent, and if I don't get it, I'm going to have to look for another job." That just sounds demanding, and doesn't really make people want to fight for you.

Asking for a raise can be intimidating, but just remember — you totally deserve this! The worst anyone can do is tell you no. But, if you've worked hard and know that you are the best at what you do, chances are your boss knows this too. So go ahead and ask for that raise. It's been a long-time coming.

More like this
Black Women's Equal Pay Day Highlights An Upsetting Problem
By Brandi Neal
Women Around The World Are Cutting Their Hair In Solidarity With Mahsa Amini
By Darshita Goyal
'Survivor' Host Jeff Probst's Salary Per Season After 22 Years Is The Real Winner
By Hugh McIntyre
Where Is Former Bachelor Host Chris Harrison Now & What Is His Net Worth?
By Hugh McIntyre
Get Even More From Bustle — Sign Up For The Newsletter