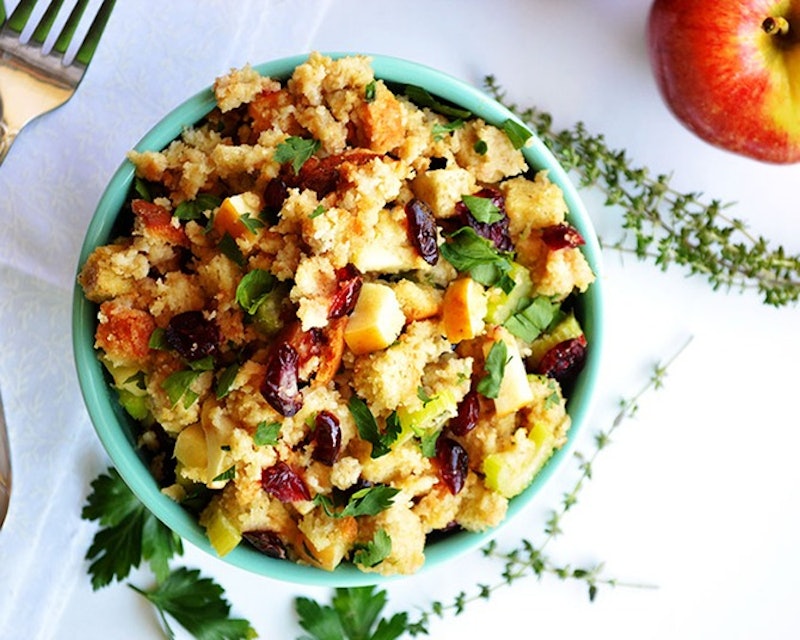 As a pescetarian (meaning I eat seafood, but not meat or chicken), I always feel a little left out during Thanksgiving, like any vegetarian or vegan. Not only am I skipping out on the main course — the turkey, obviously — but I also end up missing out on a few other staples as well. The one side dish I can almost never partake in is stuffing, because wow, finding vegetarian stuffing recipes is hard to come by.

Traditionally, stuffing is made inside the turkey, hence the name. (When it's made outside of the turkey, some people call it "dressing." I personally don't, which is why I refer to it as stuffing throughout this post.) But even when cooks don't make it inside the actual turkey, they almost always end up using the broth, or chicken broth, or sausage, or some other kind of version of meat. I have nothing against traditional stuffing (if you like meat, go for it!), but I do really love stuffing, and hate having to miss out on it. So instead of expecting the host to think of it for me on top of everything else they have to do, I've started making my own stuffing every year.

The below vegetarian stuffing recipes are proof that you don't need to add sausage, turkey, or turkey broth to your stuffing to make it taste delicious. And when you're not putting stuffing in a turkey, you'll find that there are some other adorable presentation options you might not have thought of before. Stop skipping out on the best parts of Thanksgiving! Make one of the below veggie stuffing recipes... I bet even the meat-lovers in your group will love them.

Take advantage of the end of pumpkin season with this beautiful presentation from Green Kitchen Stories. The stuffing itself includes quinoa, kale, and cranberries, and is actually even pretty healthy.

Maybe you prefer something a little more sweet. In that case, you can take advantage of the last of the fresh apples from the season with this stuffing from A Pretty Life In The Suburbs. A lot of stuffings have tons of ingredients, but this one is much more simple.

Is cornbread stuffing more your thing? Then you absolutely need to try this one from Love and Lemons. The peppers give it a big dose of flavor, and the cornbread is perfect for Thanksgiving.

Squash is such a perfect Thanksgiving food, so why not add it to your stuffing? This recipe from Half-Baked Harvest looks delicious. Although it asks for chicken or turkey broth, you can easily substitute veggie broth. With lots of herbs, this dish has tons of flavor.

Want to make your stuffing look fun without doing a lot of work? Put it in some portobello mushrooms, like this recipe from Big Girls Small Kitchen. This is especially great if you want to do individual servings.

If you're not that into stuffing made with bread, then this recipe from Family Fresh Cooking is perfect. It's made with quinoa instead of bread, and includes some of fall's best ingredients. The hazelnuts add a new crunchy touch.

The best thing about this sweet veggie stuffing from House of Yumm is that you can make it in the Croc-Pot. This is especially great if you're the hostess, since this will clear up some much-needed oven room. It calls for chicken broth, but you can use vegetable broth instead.

Add a little unexpected flavor to your Thanksgiving with this stuffing recipe from I Am A Food Blog. One of the great things about it is that it serves two, so if you're doing something intimate, this is great. Most stuffing recipes are for six to eight servings, so it's rare to find one for two.

This technically isn't stuffing, but... it kind of is. This recipe from Pass The Sushi is perfect for the vegetarian who loves cheese. Mushrooms and gruyere create a savory flavor that is only made better by all the bread in there.

This recipe from Two Peas and Their Pod is a great mix of Thanksgiving flavors — and it's pretty easy to recreate on your own. Hearty sourdough bread makes for a filling stuffing even without the addition of meat.

Look at this gorgeous stuffing — it's so pretty, you almost won't even want to eat it! This butternut squash stuffing recipe from Pickles and Honey is a perfect way to impress all of your guests. Or just, you know, yourself.

If you have the time to create these awesome little sweet potato bowls for your stuffing, go for it. This recipe from Leslie Durso is vegan, and full of fall ingredients like kale, cranberries, and obviously sweet potatoes.

Full of cornbread, nuts, Brussels sprouts, and herbs, this Southern dressing from Kellie's Food To Glow is vegan and gluten-free. This recipe is so tasty that it should shut down even the most annoying vegan-haters out there.

If you want to do something different and unique, this Mediterranean take on stuffing from My Food and Happiness is the perfect choice. OK, so maybe it's more of a quinoa salad inside of a squash, but it still counts! And it's perfect for those of us who aren't into bread.

This savory and sweet stuffing from May I Have That Recipe? is vegan and delicious. It has some truly awesome fall flavors, and honestly, you just can't go wrong with cornbread anything.

If you want to try to go the healthy route this Thanksgiving, then try this faux stuffing from Gimmie Some Oven. With quinoa and some of fall's best food (cranberries and butternut squash), this dish is flavorful, simple, and good for you. The pistachios give it the perfect finishing touch.

For more fall food ideas, check out Bustle on YouTube.

More like this
How Long Does Leftover Stuffing Last? Here's When To Toss It
By Chelsey Grasso and Alexis Morillo
Here’s Your Horoscope For Thanksgiving Weekend
By Mecca Woods
Mariah Carey Is "So Proud" After Her Kids Joined Her In The Thanksgiving Day Parade
By Stephanie Topacio Long
15 Ways To Deal With A Toxic Family During The Holidays
By Gabrielle Moss and Carolyn Steber
Get Even More From Bustle — Sign Up For The Newsletter