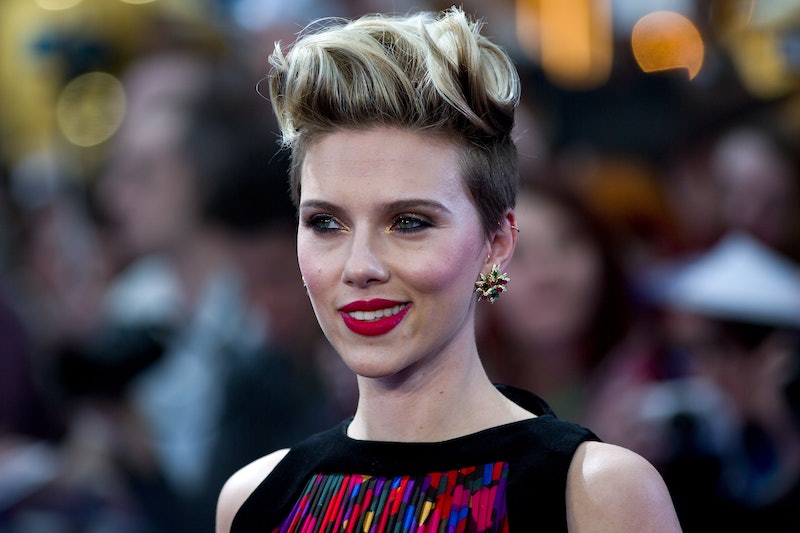 Scarlett Johansson hasn't publicly announced her status as a "feminist" (yet), even though her actions and role choices might suggest otherwise. Like, remember when Johansson was (rightfully) offended to only be asked questions about her diet during a press panel for The Avengers back in 2012? Feminist. Or remember when she was asked about what underwear she wears during filming in an interview with Extra for once again, The Avengers, and she shut that reporter down? Feminist. Or how about, when just recently, rumors have circulated that Johansson might lead the new #Gamergate film? (You know, the one all about Zoe Quinn, the female video game writer who was subject to online abuse and discrimination.) Sounds like a feminist move to me.

Besides #Gamergate, which Johansson may/may not sign on for (*fingers crossed*), the actress often chooses roles that in some way or another broaden the female narrative. From action films to smart mouthed teenage girls with staunch opinions, each one of these Johansson-led movies does something positive for women in film. Basically, what I'm trying to say is that Scarlett Johansson is a badass, and should be celebrated for the influential characters she's brought to a male-dominated Hollywood culture. Let's recount some of Johansson's most feminist roles.

Under The Skin was frankly one of the most feminist films of 2014. The obscure rendition of Michel Faber’s novel deserves little to no description because, well, you really just have to see this one for yourself. Know that the film sets out to make a comment about gender politics, and does it almost impeccably so. It’s some of Johansson’s finest, most empowering work.

Sofia Coppola, arguably one of the best known female directors working today, is known for exploring female centric stories. The heart of her first film lies in the relationship between its main characters, Johansson (Charlotte) and Bill Murray (Bob). The friendship/romance line is heavily explored within the film as are feelings of being disjointed, out of place, and ultimately lost. Coppola crafted Charlotte with such deliberation and nuance that Lost in Translation almost single handedly put Johansson on the map.

Three very different woman are in the center of this 2008 Woody Allen film. The female characters are complex, multidimensional, and though the movie more or less revolves around the romantic connections each have with Javier Bardem, the women are fully independent.

Though Lucy's reviews were mixed — could they have done more to develop Lucy as a person before turning her into a sort of character device? Probably. But a blockbuster action movie featuring a female lead will always be a positive step for women in film.

The love story between a man (Joaquin Phoenix) and his operating system (Johansson) does not seem inherently feminist. But the arc of character Samantha — yes, the operating system has an actual character arc — proves to speak volumes on ideas of gender and female personhood.

One of Johansson's first films — and one of her first well-known roles — set the tone for a long and solid career. Following two smart and edgy teenage girls navigate post high school life proved to be an interesting glimpse into the heart of young feminism.

Sure, strong female roles roles can be conceptualized, and written, but if no one signs on to play them, Hollywood's gender representation will stay stagnant. Thankfully, actresses like Johansson aren't afraid to move the feminist needle forward (officially, or unofficially) in film.