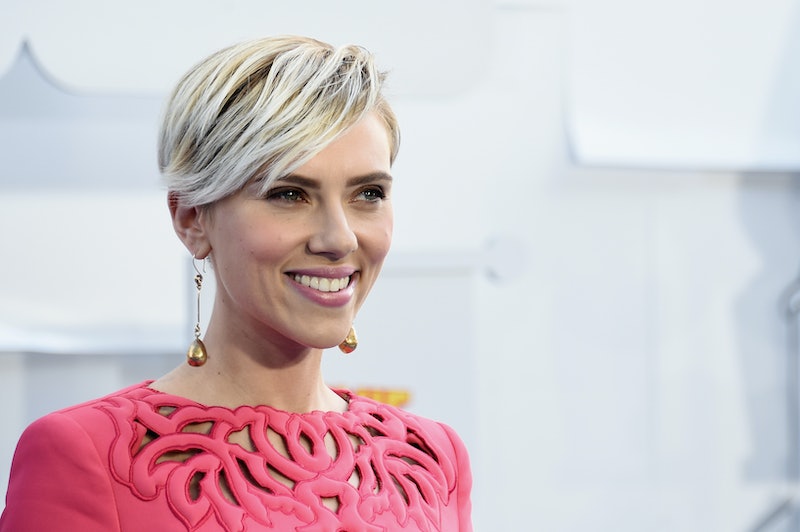 Good news, Internet: The forthcoming memoir, Crash Override: How To Save The Internet From Itself , which was written by game designer Zoë Quinn and details the persecution she experienced as a result of #Gamergate, is to be made into a movie that might star Scarlett Johansson. According to Deadline, reports say that Johansson is very interested in the project, which was subject to a bidding war won by Pascal Pictures, the company owned by former Sony chairperson Amy Pascal. While the book is due out in September 2016 from Touchstone, a Simon & Schuster imprint, the movie has the working title Control Alt Delete and, according to Deadline, will be "a very inside look at gaming and nerd culture and what happens when one gets caught in the gears of that machine." I majorly hope the Johansson rumors are true, as I'm totally ready for her to kick-ass in an über feminist way.

With her recent portrayal of Black Widow in the Avengers and Captain America movies, it was great to see Johansson take a role in the traditionally sexist comic-book genre. However, her story lines in those movies often lacked the subtlety or strength the actress truly deserves — so the role of super-feminist game designer Zoë Quinn could be the perfect project for Johansson.

The background to the forthcoming book and movie is based on the real-life experiences of Zoë Quinn, a video game developer and writer. Quinn was subjected to monumental online abuse after her ex-boyfriend uploaded a 9000+ word blog post about their break-up, alleging that the only way Quinn received good press for her games was by developing personal relationships with reviewers. The claims were proven to have no foundation, but the blog post went viral, and spawned the #Gamergate moniker. In an interview with The Guardian, Quinn said, "It was very precise and deliberate. I fully believe it was there to ruin my life." Quinn was "doxed" — when your information, including personal details and addresses, is posted online without your permission — and since then has feared for her life.

As news of the book and movie deal intensifies, Quinn has far from given up or gone into hiding. Instead, she stands up for other people who have been subjected to abuse at the hands of anonymous online posters. In The Guardian, she said, "I’m scared that what it’s going to take to stop this is the death of one of the women who’s been targeted.” Others have joined the cause, with Brianna Wu writing an awesome essay about standing up to Gamergate. News of a movie is a victory for anyone who's suffered online abuse, particularly in the gaming community.

Quinn's is a story that needs to be told, and Johansson would be an awesome fit for the movie. Not only is she fierce and outspoken, Johansson is a fearless actress whose career has incorporated every genre. #Gamergate will finally be exposed on an international scale for the misogyny it purports and the lives it has destroyed. Online harassment needs to be examined closer, as does sexism suggesting that women are ineligible for certain career-paths, hobbies or interests. Quinn's writing sounds as though it will do just that.