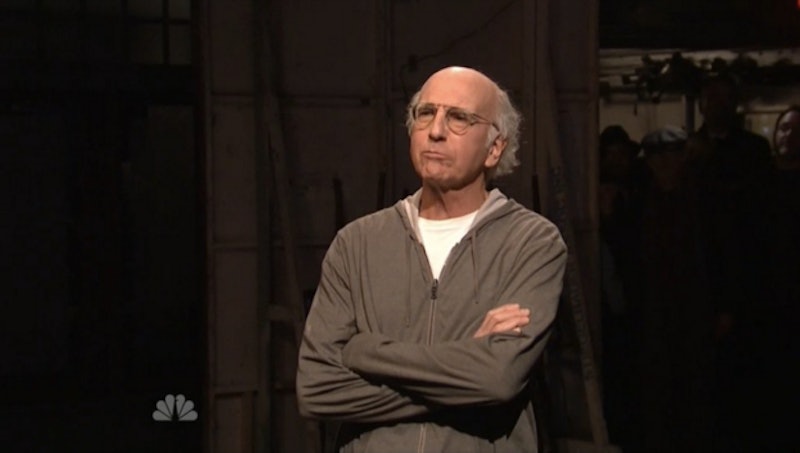 Toward the end of Saturday's opening monologue on SNL, Larry David called Donald Trump a racist in a surprise appearance. It was the second time David played the role of the Vermont presidential candidate, and he made a huge splash by shouting backstage, "Trump's a racist!" Trump responded by appearing exasperated but not at all surprised, claiming he "knew this was going to happen." David then humorously explained he heard he could get $5,000 for yelling this.

Trump had begun his monologue by referencing his previous appearance as host of the show in 2004, joking about his notorious ego. He also made jokes about his penchant for feuding with different celebrities and politicians, focusing on his ongoing feud with Rosie O'Donnell.

The scripted confrontation acknowledged protests against NBC for inviting Donald Trump to host the show due to his offensive language toward the Latino community. After all, in June, the network cut its ties with the Republican candidate for calling Mexican immigrants "criminals" and "rapists." Critics, namely influential Latino activists and organizations, have pointed out the hypocrisy in condemning Trump's statements, and proceeding to give him screen-time to raise their ratings. Instead of addressing this criticism or even having Trump clarify his racially-charged statements, quite disappointingly, the confrontation did little except make light of Trump and his reputation with some as a racist.

Earlier this week, the Latino activist group DeportRacism.com offered $5,000 to anyone who "heckled" Trump, specifically by yelling "Trump's a racist!" David's interruption of Trump's monologue was possibly an attempt at humor connected to this, which leaves us wondering what the comedian's real views on Trump and his statements about Mexican immigrants are. The comedian did not comment on the controversy surrounding Trump hosting SNL. Neither has presidential candidate Bernie Sanders, the politician David portrayed earlier in the show. At any rate, David appears to have been willing to participate in a scripted interaction with Trump that more or less shrugged off opposition to the GOP candidate's racial insensitivity.

The thing is, racism isn't funny, and making fun of someone for making insensitive comments about entire demographics is, in a way, almost celebrating it. Let's put the jokes aside and put the racism thing to bed.