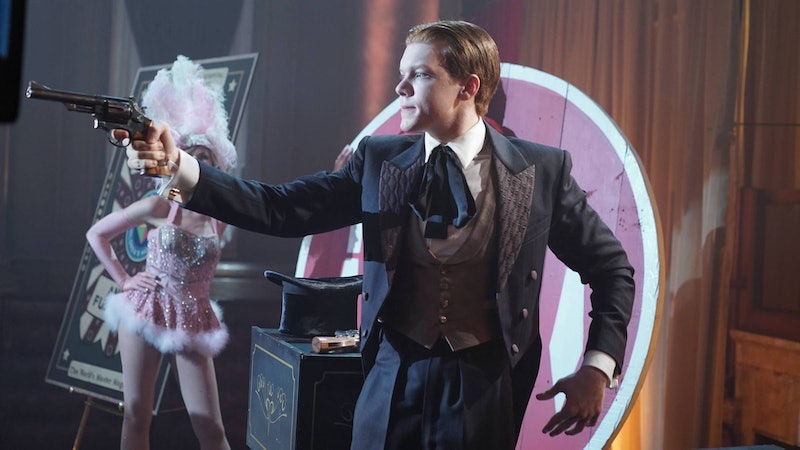 The introduction of Wayne Enterprises' secret chemical lab at the end of an episode of Gotham raised many questions, including: will Indian Hill bring back Jerome? My first instinct is a hard no. Jerome was shown in the morgue, and he was dead. That seems pretty clean cut. And the whole closing monologue made it seem pretty obvious that Jerome is not the Joker, he's the inspiration for Joker.

Plus, there's not a single piece of evidence saying Jerome is anything but dead. When the show has wanted to "kill" off a character without definitively proving whether or not they're still alive, it doesn't usually show a dead body, and instead will depict the person getting a potentially non-lethal injury. There also haven't been any hints from people behind the scenes of Gotham that suggest fans should be prepared for Jerome to return.

But you know what? Gotham loves to play with audience expectations like that. It built up Cameron Monaghan's performance as one of the big draws of Season 2, set up Jerome as the leader of the Maniax, and positioned him with Galavan, the big bad of the season. It made sense to expect that he'd stick around, at least for a while. But no, instead it yanked him away with an unexpected knife in the throat from Galavan. And it would be just like Gotham to bring him back in a scene that was just as surprising.

There's also the question of what Indian Hill would do to Jerome. Unless it turns out that the stabbing wasn't fatal (in which case, why was he in the morgue?), this would mean that the scientists at Indian Hill have the power to control life and death. Though, it's also possible that they could show that Jerome's body was taken by Indian Hill for testing, or that the chemicals are being tested on the criminally insane.

It could be a bit of a reference to how Joker falls into a vat of chemicals and transforms into his villainous self in some versions of his backstory. If that's the case, then Indian Hill could take on a mythic quality, and Gotham City is always full of urban legends in other mediums, be it DC Comics or Batman movie series.

Still, I don't think we'll see Jerome Velaska alive and kicking by the end of Gotham Season 2. But that doesn't rule out some other possibilities for Indian Hill to play a part in the story of how Jerome went from Gotham's leading Joker candidate to being a totally different inspiration for the famous character — his body could help determine the usage of the chemicals that will ultimately give an unlucky, new character bright white skin, green hair, and an enemy in Batman.