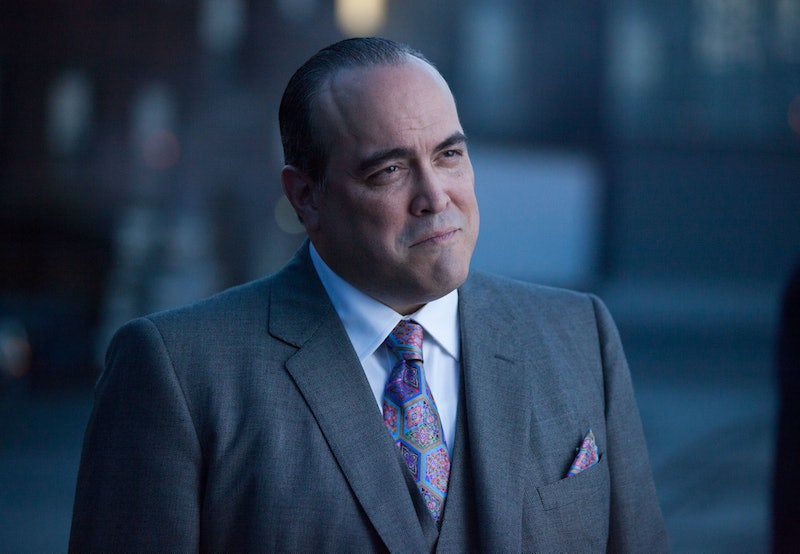 I can feel Gotham building slowly and steadily to an overarching storyline, but the little hints they keep dropping about Arkham Asylum have yet to come together to form a whole picture. However, Monday night's episode of Gotham introduced a new location into the mix that's related to Arkham — and I already wish they hadn't. When discussing the ultimate fate of Maroni's beloved snitch Penguin, Falcone offered to let Penguin live and remain in Maroni's care if Maroni gave him something in return: real estate. Penguin persuaded Maroni to give Falcone a warehouse known as Indian Hill and I hope you can see the problem already.

According to Fish Mooney, Indian Hill is located in Arkham and it's "a toxic waste dump on top of an Indian burial ground." According to her, it's also worthless. Considering the revelation that Penguin has been spying for Falcone this entire time, it will be interesting to discover exactly why he wanted Falcone to have that particular warehouse in his possession. However, Indian Hill? Cursed Indian burial grounds? Are we really doing this, Gotham? Can that racist and offensive media stereotype please just stop already? It's right up there with "gypsy curses" on my list of Western horror movie tropes that need to be retired. It's 2014. We shouldn't still be stereotyping whole cultures in this way. We can start with the fact that they're Native Americans, not Indians, and go from there.

However, the fact that this is a toxic waste dump located within Arkham makes it incredibly significant — mostly because it hints at the origin story of a certain villain we still haven't discovered the true identity of yet. The common theme of all of the Joker's backstories is that somehow, some way, he falls into a vat of chemicals that give him his iconic, clownish look and drive him completely insane. And Arkham itself is like a luxury resort for the Joker, who gets thrown in there constantly and hangs out for a while for kicks before easily breaking out along with every other villain in Gotham.

Thus, real estate in Arkham that doubles as a toxic waste dump seems like the perfect way to introduce the Joker into the Gotham universe at last. We all know he has to show up eventually, just as we all know Arkham Asylum has to re-open eventually and we all know Bruce Wayne has to become Batman eventually. Indian Hill — seriously, can we please give it another name? — is a chess piece on the board, but we don't know which one it is quite yet. I, for one, don't particularly want the Joker to be born in a place called Indian Hill on Gotham, but I do want the Joker to finally show up.