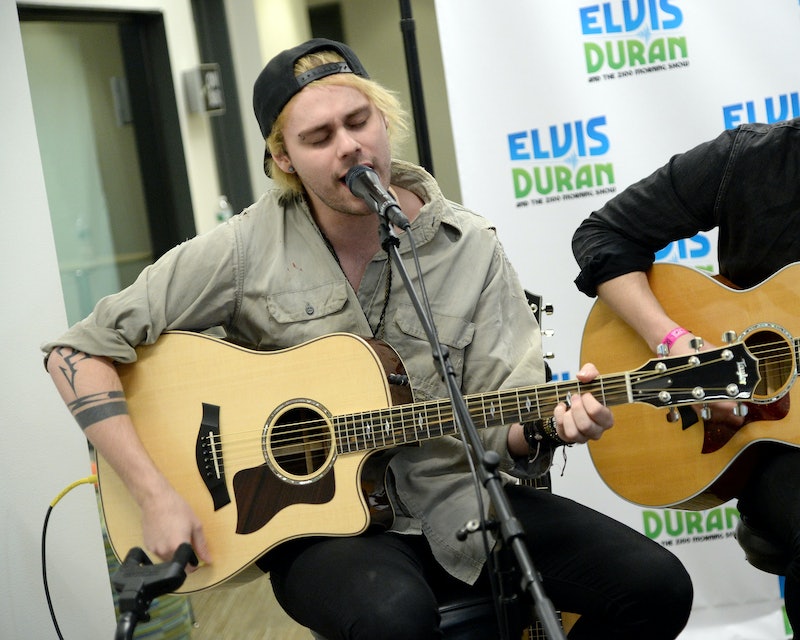 Everyone takes a tumble every now and then, but few of us manage to do it on live television. Yet on Sunday, while Australian pop-punk/rock band 5 Seconds of Summer were closing out the BBC Radio 1 Teen Awards live in London, 5SOS guitarist Michael Clifford fell off the stage. Don't worry, guys, he's fine; he actually handled the embarrassing moment like a pro, including giving a reason behind the fall that has got to be the icing on the cake.

While talking to Radio 1 after the performance, Clifford joked that the excuse for his fall was "I was looking at Rita Ora and I was like... hey and I fell." Good cover, Clifford! Leave it to this funnyman to always serve as the comic relief. Up until this little incident, 5 Seconds of Summer had been been having a great season. A few weeks ago, the band released their second studio album, Sounds Good Feels Good . The popular album has been on the Billboard charts for a little bit over a week now, and singles like "She's Kinda Hot" and "Hey Everybody!" have helped it achieve success.

Thats why it comes as no surprise that the high energy band was invited to not only perform, but close the BBC Radio 1 Teen Awards this past weekend. Of course, they went out with a bang, performing a small set of songs for the excited audience. They opened with the hit that made them famous, "She Looks So Perfect", and ended with one of their latest chart hits, "She's Kinda Hot".

But quickly, it became clear that fans weren't the only ones falling (hah, hah) for the band. At the very beginning of the 5SOS set, Clifford completely fell off the stage. Thankfully, he tried to regain composure and brought himself back up, laughing the entire time. A fan managed to grab a clip of the incident and posted it on Twitter. It's pretty hilarious.

This isn't the first time that the "She Looks So Perfect" musician has had an accident on stage. Early in the summer, while performing at a stop on the band's "Rock Out With Your Socks Out" tour, Clifford's hair caught on fire, which resulted in him taking some burns to the face. Ouch! Thankfully, this newest incident wasn't as serious, and Cliford took to Twitter to express his angst, much to the humor of his fans.

It's okay, Michael! What's most important is that despite the injuries, he's gotten back up every time, no matter how cheesy it sounds. Of course, coming up with an excuse like stargazing at Rita Ora doesn't hurt your case, either.