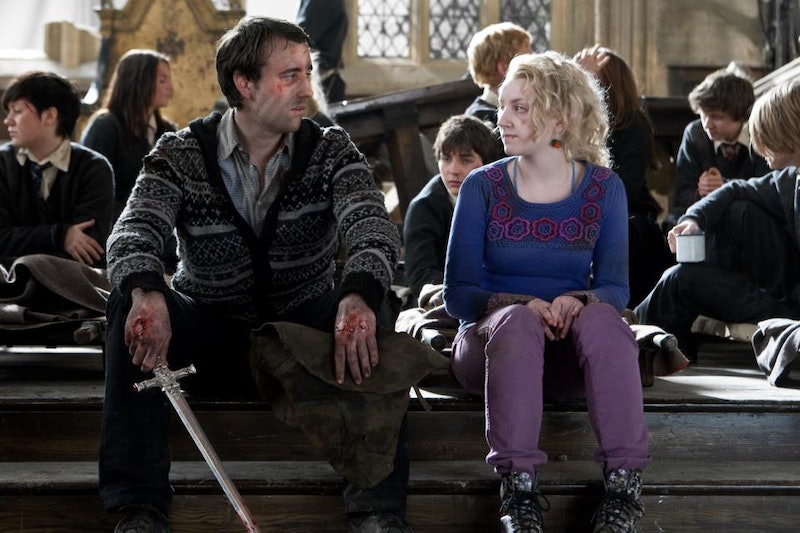 Although never referred to that way in the books, the Harry Potter fandom has popularized the term "Golden Trio" to describe Harry, Ron, and Hermione's friendship, a term we continue to use to this day. But unless you've been scrolling Tumblr with the same unhealthy enthusiasm that post-Potter Potterheads do, you might not know who is in the Silver Trio in Harry Potter . Modeled after the original three, the Silver Trio is a nickname appropriately given to the people who were left behind once our protagonists ditched Hogwarts: none other than Luna Lovegood, Ginny Weasley, and Neville Longbottom.

Although they don't get nearly as much credit as the so-called Golden Trio does, these three were actually responsible for a fair amount of badassery in the books. After the disbandment of the D.A. and the battle in the Department of Mysteries, Luna, Ginny, and Neville took up the sword (figuratively and literally, in Neville's case), and started meetings in secret — no easy feat, considering they'd already been caught once, and that at this point the school had been taken over by Dark wizards. Tumblr has popularized their friendship and the term by devoting fan art to the trio, giving them the well-deserved recognition that they couldn't have gotten with the book only being told from Harry's point of view.

Less often, The Silver Trio is used to refer to the fandom's three favorite Slytherins, Draco Malfoy, Blaise Zabini, and Pansy Parkinson — but because of their polar oppositeness to the story's main heroes, they are more commonly referred to as The Anti-Golden Trio.

In any case, it is evident that J.K. Rowling likes to work the power of threes into her story-crafting, or else we wouldn't have so many Trios in the first place. We've got the main Marauders (Sirius, Remus, and James), the number of contestants intended for the Triwizard tournament (and the number of tasks), three Unforgivable Curses — and, of course, the three Deathly Hallows. The number three is said to have magical properties, and its psychological effect on us is kind of impossible to ignore. We seek patterns for familiarity, and one of the most powerful of them is the order and balance that the number "three" seems to bring.

Other trios aside, let's take a moment to give some mad props to this one.

The girl who took no sh*t from all six of her older brothers, who came up against the darkest, most powerful wizard the had ever known at the age of 11 and persevered, who grew into herself so firmly that she never let anyone sway her from her beliefs.

The girl who made her own reality and didn't give one flying Crumple-Horned Snorkack what other people thought of her, and would sooner lay down her life than compromise any of her friends.

The Boy Who Could Have Been, and the one that everyone underestimated from — who eventually grew up to the potential that everybody had smothered out of him, proving that he had the fierce heart the Sorting Hat saw in him from day one.

HELL YEAH, SILVER TRIO. We may not take a moment aside to appreciate them as often as we should, but that doesn't make them slay any less.