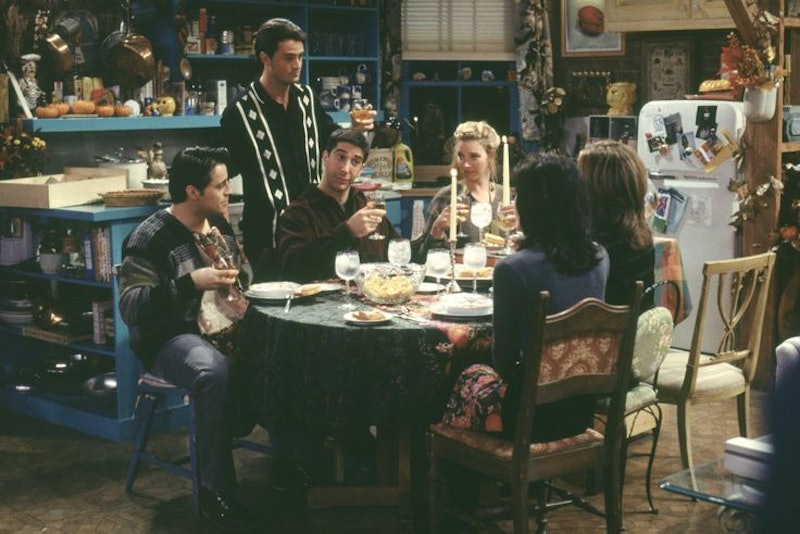 I'm not ashamed to say I've learned a lot from Friends over the years. One of the most crucial things I've learned is how to survive Thanksgiving, courtesy of Chandler Bing. (I also learned my sense of humor, and the Japanese word for freshwater eel, but let's try to stay focused.) Whether it's your first Thanksgiving hosting, or you're dreading making a trek to a table you've visited many times before, our boy Chandler is just the man to turn to for advice. Because who hates Thanksgiving more than him? Nobody, that's who. Ever since his parents announced to him over the gravy that they were getting a divorce, and he quickly watched his whole dinner rewind, vomit-style, Chandler has loathed the holiday. But he's a team player, and he always sucks it up and shows up in the Thanksgiving episode.

And if he can get through it, you can, too. So, before you feign sickness, or sic the dog on the cooked bird in hopes of getting out of your plans, check out these nine simple tips for surviving whatever Thanksgiving can throw at you, courtesy of the one and only Chandler Bing.

1. Bring Your Own Food

Showing up at a Thanksgiving table is always a crapshoot as far as whether there will be things available that you like, so take away the guesswork and bring something you're a huge fan of. It doesn't have to go as far as grilled cheese, tomato soup, and a bag of Funyuns, like Chandler's Thanksgiving menu, but it should be something you don't mind eating all of if worse comes to worse.

This is a day to be thankful for the things you like, not pretend to like the things you don't, so don't feel like you need to point your face at a football game if you aren't into the sport. Likewise, no need to tune in to an inflated Snoopy floating through midtown if you're more excited about watching touchdown sport. (Guess which category I fall into?)

3. Get Yourself A Monica

Sure, she's a micro-manager, but that's what you need at Thanksgiving! Timing out all those dishes is a gift, a talent, a science, or all three, so hitch your wagon to at least one person who knows what they're doing, and you'll be fine.

Do you really want to spend the day in the emergency room because somebody dropped a knife on your wicker shoe? No, no you don't.

If there's one lesson that should be an easy takeaway from Friends, it's that you really can choose your family. Not literally; I'm not encouraging anyone to become blood brothers and sisters, here. I mean that you can choose the people you surround yourself with, and the people you go through life with, and they don't necessarily have to be your Great Aunt Nora who judges your life and gums mashed potatoes with her mouth open. Instead, you can select a warm, loving group of your five best friends in the whole world who accept you as you are.

The holiday season is complicated enough for new couples, so don't add to that by attempting to shoehorn significant others into your own festivities. Once they've been around for a year, great, they're invited! But any shorter than that, and you risk small talk at the dinner table, quiet bickering in the kitchen, or having a stranger in your group photo this time next year.

If you've done Steps 1-6 correctly, you should be in an environment where you feel safe to say, "ladyfingers, jam, and beef, sauteed with peas and onions? I'm good, thank you!" Your friend who's a notoriously bad cook has many other qualities that you can celebrate without wasting calories on a dessert that tastes like literal feet. (We tried it, we know.)

8. Keep Your Head Out Of The Bird

You wouldn't think I'd have to tell you this, but, out of Chandler's five friends, two of them have had their heads inside the body cavity of a raw turkey, so it's worth getting the word out.

No matter how much you think you hate this holiday, try to stay optimistic, because some of the best moments of your life can unexpectedly happen on your worst days — as long as you have the right attitude.

Weird, I was expecting this to be a lot more sarcastic, but there are genuinely very heartfelt lessons we can learn from Chandler Bing. And that's what I'm thankful for this Thanksgiving. Or Friendsgiving, I should say. Could that joke BE any more obvious?