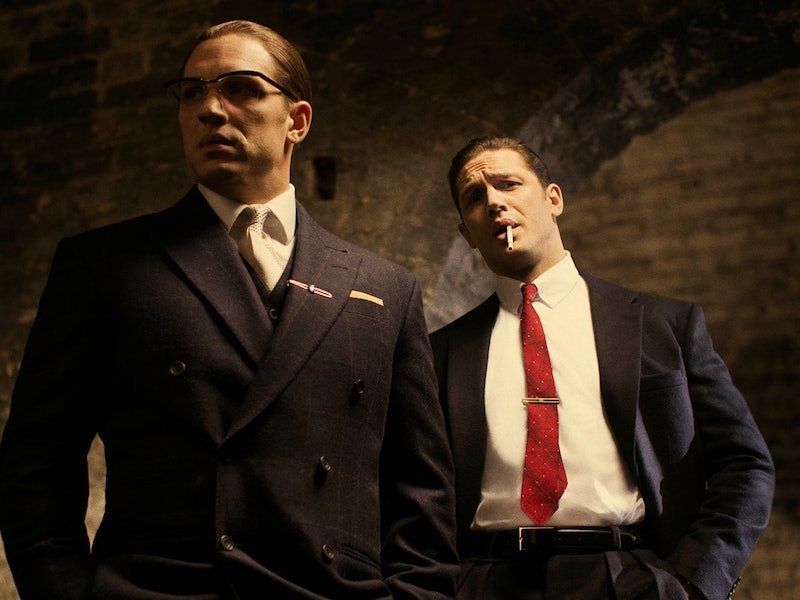 If you're unfamiliar with the infamous Kray twins, you'll get to know them pretty well after watching Legend, which opens in U.S. theaters on Nov. 20 (the British crime thriller debuted in the UK on Sept. 9). Based on a true story, Legend follows the tale of Reginald "Reggie" Kray and his twin brother, Ronald "Ronnie" Kray (both portrayed by all around great guy Tom Hardy). The brothers are English gangsters who run amok in London during the '50s and '60s, mingling with the underworld just as easily as they do with politicians and celebrities. The film charts their rise, but also the downfall that ultimately landed the siblings in prison in 1969.

Reggie's wife Frances Shea (Emily Browning), who committed suicide in 1967, narrates the film from the afterlife, so it's no surprise that Legend touches upon some pretty heavy topics, such as mental illness and murder. The material stems from the Kray twins' lives, as told through a book titled The Profession of Violence: The Rise and Fall of the Kray Twins by John Pearson. But just how much of the film is accurate to the real-life crimes of the Krays? In The Guardian, a close friend of the family, Maureen Flanagan, gave commentary on what she thought the film got right and what it missed the mark on. Her overall opinion?

"I thought the film was great... In this film, Tom Hardy is chilling. He’s got everything right as Reggie: the walk, the beautiful hands, the way he holds the cigarettes and that frown which was always quizzical as if he’s just about to ask you a question. And then, on the other hand, when he plays Ron, he’s menacing and he’s got the stare absolutely right. I think he gives a fabulous performance."

Flanagan went on to describe the film's accuracy in portraying the romance between Reggie and Frances (Reggie apparently really did propose to her by climbing up a drainpipe to her bedroom window, as shown in the film). However, Flanagan said that a scene in which Reggie physically assaults Frances wasn't based in reality. According to Flanagan and other people who knew Reggie well, such an attack never occurred in real life. According to Pearson, Frances herself also insisted that Reggie was never physically violent toward her, as a review of the film in The Guardian noted. Continued the paper,

According to John Pearson, Reg’s intimidation of Frances was psychological: he talked about killing her, her brother and her parents and brandished his gun. Knowing she was afraid of the sight of blood, he cut his own hand and dripped blood all over her as she slept.

Flanagan also described the Kray family matriarch, Violet (Jane Wood) as "the most important person in [the Kray brothers'] lives." In the film, however, Flanagan says her character was "dismissed" and "only in a couple of scenes." Furthermore, Violet is shown in the film to mistreat Frances, but Flanagan claimed that she had only ever seen Violet showing kindness to Frances.

As far as Ronnie's homosexuality being portrayed openly in the film, Flanagan claimed that Ronnie actually had a small circle of friends and family (known as "The Firm") whom he informed about his sexuality. "A lot of men who really thought that there might be something there would never have said anything to [Ronnie]," Flanagan said. "He would have attacked them so they wouldn’t ask. Later on, it just became knowledge with the people that he considered 'the firm.' It was accepted."

In The Guardian's review, it's noted that the film sets up Ronnie as a paranoid schizophrenic and Reggie as the "rational" twin, but it's also stated that "It’s certainly true that many people found Reg the less terrifying of the two, but both men were violent and unstable from the beginning." The murders which finally land both brothers in jail are shown in the movie; Ronnie shoots a criminal named George Cornell point-blank, which is true to life. The movie attempts to give a motive for the murder, but in reality, the true rationale is unknown. The film also depicts the murder of the infamous criminal Jack McVitie by Reggie as a stabbing that occurs at a party, but in reality, McVitie's murder was an involved double effort, with McVite held back by Ronnie and urged his brother, Reggie, to go through with the stabbing.

When it comes down to it, as glamorous as the Kray brothers' lives appeared to be — spending time with famous celebs like Frank Sinatra and Judy Garland — and as bigger-than-life as the movie title suggests, the reality of the Kray brothers is dark, twisted, and hardly worth being labeled a legend.