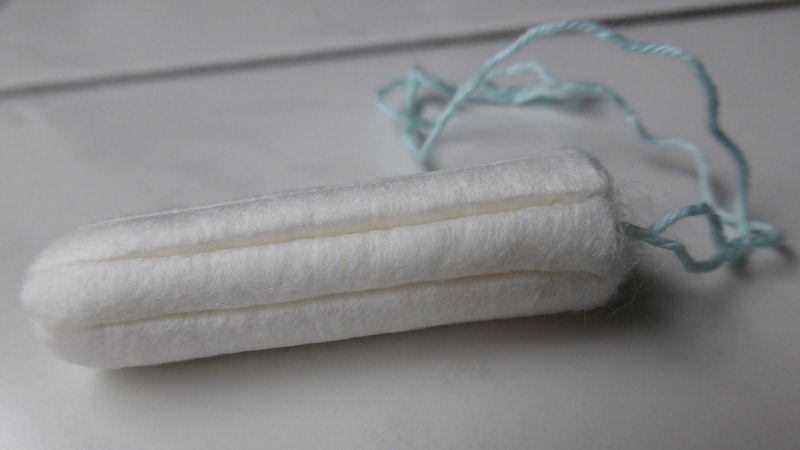 Last week, Charlie Edge and Ruth Howarth protested the United Kingdom’s “tampon tax” in a powerfully simple way: The two UK women stood outside of Parliament, freebleeding for three hours. Their message? Menstrual supplies are not a luxury, and people shouldn’t have to pay extra for them.

Edge and Howarth’s protest comes on the heels of a vote at the end of October in which MPs struck down a bill that would have removed the UK’s “tampon tax,” a five percent VAT levied against luxury items (Products that are deemed “necessities” are exempt from the tax). In a Facebook post from Friday, Edge announced her and Howarth’s protest, writing,

Today i am forgoing tampons and pads outside the houses of parliament to show how 'luxury' tampons really are. …

But everyone keeps saying "haha omg how quickly would we get free tampons if everyone stopped wearing them?!"

She highlights the inconsistencies in how the government currently divides “luxuries” and “necessities” for tax purposes, pointing out how absurd it is that “edible cake decorations” and jaffa cakes are exempt from the VAT, while basic sanitary supplies aren’t.

Taxes are necessary, i get it.

So are tampons/ pads.

They're not luxury items, anymore than jaffa cakes, edible cake decorations, exotic meats or any other number of things currently not taxed as luxury items.

Edge adds, “We've had enough. Maybe bleeding on their doorstep will get the tories to do something about this?”

Wearing white pants, with blood clearly visible between their legs, Edge and Howarth provoked positive responses from supporters, as well as a negative backlash from people who were “grossed out” by the sight of menstrual blood. Their protest aptly demonstrates the ridiculousness of characterizing tampons and pads as "non-essential luxury items" — because if menstrual supplies aren’t a necessity, then why were people so bothered by these women's decision not to use them?

In a follow up to her original post, Edge responded to some of the negative responses she and Howarth received. She wrote,

I think it's important to note that this isn’t just a women’s issue –not all women have periods and not all people with periods are women. But all the hate I’m getting is based in sexism. We are literally being taxed for ovulating.

She also reacted to criticisms that a few girls standing outside of Parliament wouldn’t make a difference. She said,

We weren’t expecting to wave a banner in an MP’s face. We weren’t hoping to leave a gross bloody mess to upset passers-by.

But the post I made was shared over 1000 times in 12 hours with mostly positive response and after 3 hours I already had media attention. People are talking about it. This isn’t just ‘three girls outside parliament with blood stains’. This is three more people who are angry about something, encouraging the millions of other people who are also angry about the same thing, to talk about it.

A few days later, Edge’s story has been picked up by multiple media outlets, and her post has been “liked” by more than 20 thousand people and shared almost 15 thousand times. I think it’s fair to say that her protest has made its mark.