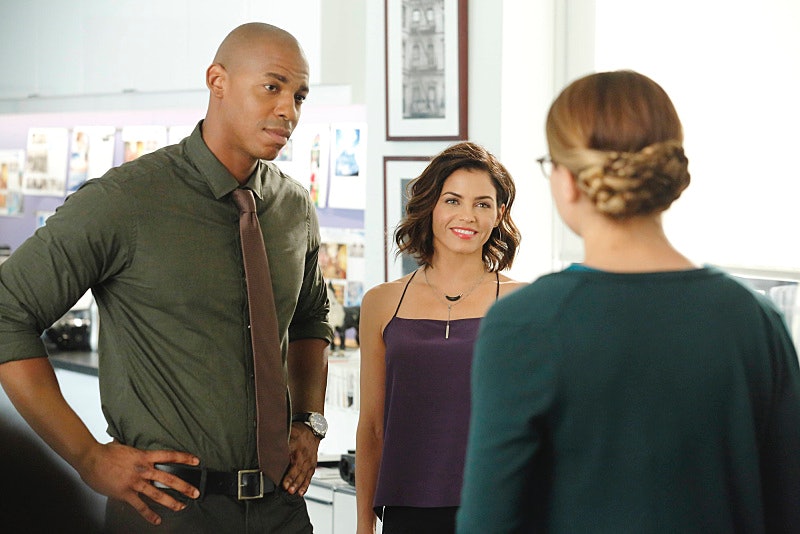 While the star of Supergirl seems cut from the cloth of comic books path, you may have noticed that Kara's photographer friend is different from previous adaptations. In fact, Mehcad Brooks' character goes by James Olsen on Supergirl instead of Jimmy. He is no longer a little redheaded kid, clutching a camera and saying "golly" all the time. At NYCC, the actor talked to reporters about taking on the iconic role, fan expectations, and his relationship with Kara will be like on the show.

"Being the first black Jimmy Olsen," Brooks said, "it’s an honor. Think about this: Jimmy Olsen was created in 1940. Back then we lived a very monochromatic existence. Like, you can’t blame people for writing what they knew or drawing what they knew... So a lot of the social inequities of the past are being righted now, because we have the opportunity to do something. I just think that the show benefits from having a new version of him."

Other recent examples of racially blind casting traditionally white characters on television include Joe and Iris West on The Flash, Hawkgirl on DC's Legends of Tomorrow, Merlin and Lancelot on Once Upon A Time, and Joan Watson on Elementary. This is a trend that needs to continue. It's a great way to retroactively combat the lack of representation in media and make all stories both more inclusive and a reflection of the real world. Look at the cast of the musical Hamilton on Broadway, which tells they story of America's (super white) founding fathers using almost exclusively people of color. It's fantastic.

"The DNA is the same, " the actor continued. "He still has truth and justice in his heart, he’s still Superman’s best friend, he’s still a great guy. But he’s just a little stronger, and I would say he’s more suave, he’s more romantic, he’s got a lot of other things going for him that we never got to see from Jimmy."

As for fans who might have trouble budging from the original look of the character, Brooks is hoping that they'll take the show beyond face value. One day, he points out, his take on Jimmy Olsen will be the one that kids remember, and that's really cool. "You just hope that you can impress the fans that have that sort of idea in their head already," Brooks said, "because ideas are hard to fight. As soon as you look at me, they say 'Jimmy Olsen, wait — does not compute. What’s happening?' So for me, I really want people to judge the content of my character. Wow, I just used a really cool quote in an ironic way. I’m corny — I told you guys!"

What else is different about this Olsen? In the panel, Brooks initially described his take on James Olsen as the "swaggy version," then quickly noted that it made him feel like Justin Bieber. He also noted that the iconic character is, due to his lack of superpowers, both a sidekick of sorts and a stand-in for the audience. However, as someone who has "bro-hangs" with Clark Kent/Superman, he also serves as a mentor for Kara. "He’s very protective," Brooks said, but also talked about how Kara needs both room to grow and support in order to achieve that. As a feminist piece, that nuance is important.

Fans of Supergirl have also noticed James' potential as a love interest for the protagonist. How cute are they together? The yellow sun didn't generate that spark. Plus, it may take a while for the Kara/James ship to set sail, anyway. "There is definitely an attraction between the two of them," said Brooks. "But there’s kind of a 'bro code' with Superman. If Superman asks you to go check-in on his cousin, you can just go and start hitting on Superman’s cousin... cause then you start getting hit on by Superman. And that’s not a good thing, right? Like he will heat vision and freeze breathe you to death!" That is a very good point, and gives us a lot to look forward to from James on Supergirl!