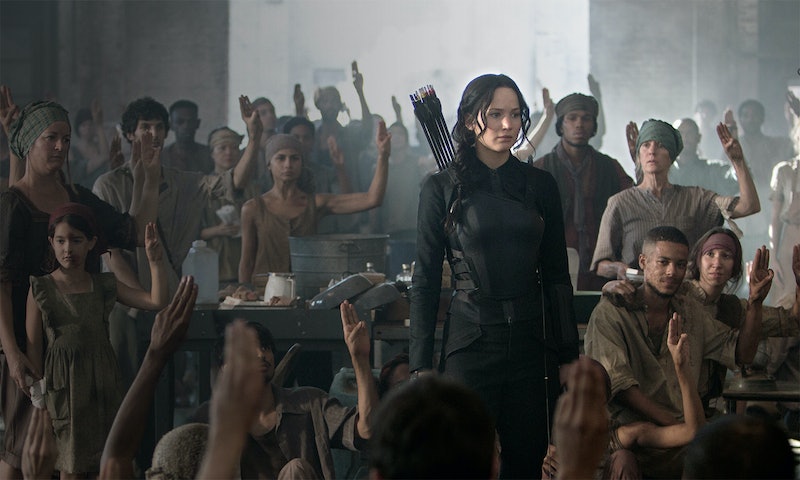 The Hunger Games saga will come to a dramatic end when Mockingjay — Part 2 is released in theaters on Nov. 20, and the pressure is on Katniss Everdeen to lead all 13 districts in their final uprising against the Capitol. That’s right: all 13. It’s no wonder that the former Tribute struggled to accept her role as the Mockingjay; people from every corner of Panem are looking to her for guidance and encouragement. That’s a hefty burden for a young woman, and a lot of citizens to inspire. Remember that Panem is divided into pieces of land mostly according to the service they can provide the Capitol, and while many may not know what the Hunger Games districts do, I'm here to fill you in.

OK, here's how it goes: each district has a special industry. Some of the tributes that Katniss and Peeta met in the arena brought knowledge and tools with them that reflected those industries. And some of them — i.e. the “career Tributes” — reflected the districts’ relatively close relationships with the Capitol. They spent their childhoods training instead of working to feed their families, like most of their competitors.

Not every district gets the same share of screentime in The Hunger Games series, but each one is still important to the Second Rebellion, either as an ally or an enemy. Here’s a handy refresher for what makes each Panem district special.

District 1 is all about flash and glamour, just like Tom Haverford and Donna Meagle on "Treat Yo Self" day. They're quite cozy with the Capitol because they produce the status items that Capitol citizens have to be seen carrying. All the District 1 Tributes that Katniss meets have names straight out of a private Beverly Hills preschool, like Glimmer and Cashmere.

Also good buddies with the Capitol, District 2 specializes in stoneworking. Obviously, that's a more dangerous industry than District 1's, so the lower class residents are still worked to the bone. Clove and Cato hailed from District 2, and man, were they scary.

District 3: Technology, Or: When's The Next Apple Launch?

District 3 citizens are super smart but incredibly poor. Their work designing TVs, computers, and other electronics for the Capitol paid off in the form of Wiress and Beetee's ingenuity in the Quarter Quell.

District 4: Fishing, Or: The Lobster Is Market Price

Finnick and Annie take to water like, well, fish. They were born in this district, which is your ideal Panem destination if your heart stops at the idea of a seafood buffet.

District 5: Electricity, Or: They've Got The Power

In the first Mockingjay, the rebels bombed a dam in District 5 and plunged most of the Capitol into darkness. And that, President Snow, is why you shouldn't hoard your power all in one place.

District 6: Transportation, Or: Your Frequent Tribute Miles Are No Good Here

District 6 are professionals in getting people around. They build and maintain the mass transit systems in and around the Capitol. Step away from the closing doors.

District 7: Lumber, Or: They've Got Wood

Trees! That's why Johanna Mason is as handy with an ax as Steve Rogers here.

District 8: Textiles, Or: I've Got Nothing To Wear!

You see the very industrial District 8 in Mockingjay - Part 1, when Katniss travels there to film a video message on Coin's instructions. The citizens make beautiful garments for the capitol, but live in smog and filth.

District 9: Grain, Or: Can We Get Some More Bread?

There isn't much about District 9 in the Hunger Games canon. But since it's the hub of Panem's granaries, it's probably Peeta Mellark's dream vacation spot.

District 10: Livestock, Or: Cowboy Take Me Away

This is where the meat comes from. Mmm... meat.

District 11: Agriculture, Or: Seeds Of Doubt

Rue was the 11th District's entrant in the 74th Annual Hunger Games. Katniss' kindness to her prompted this district to show gratitude and loyalty to her early on in the Second Rebellion. The Peacekeepers did not approve.

District 13: Weaponry, Or: BLOW IT UP

District 13 was the source of the Capitol's firepower, until it was presumed destroyed by the First Rebellion. 13 kept on doing what it was doing in secret, and became the hub of the rebels' second coup attempt.

The Capitol had better watch its back. On their own, many of these districts are poor and weak. But together, they're a revolution.