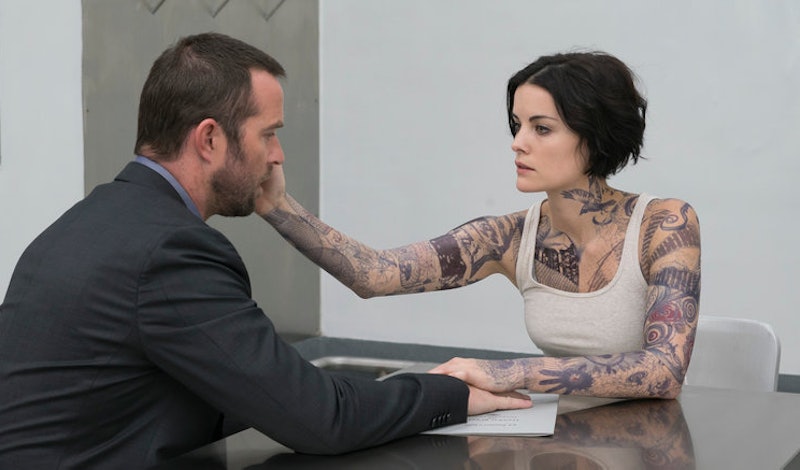 It must be their lucky day, because the NBC show Blindspot just got renewed for a second season. This is particularly impressive because the series only had its premiere on Sep. 21, so this decision is being made after less than two months, and after the airing of just seven episodes. Obviously, executives at NBC have seen more than that, and know how things pan out with our Jane Doe this season (no spoilers, in case you aren't caught up!), but I really can't overstate how much of a vote of confidence this is. And rightfully so, considering that Blindspot has proven itself the most popular show to premiere in Fall 2015.

But still! While other new-baby shows on NBC like The Player, Truth Be Told, and Heroes Reborn have to sit around biting their nails waiting to get the official word handed down, Blindspot can relax into their season and be their best selves with no stress at all. That's a dream usually only afforded to shows on platforms like Netflix and Amazon, which aren't as reliant on ratings and viewership and can greenlight whole seasons willy-nilly.

You're probably already watching Blindspot, because this renewal proves that almost everybody is, but, in case you aren't, let me bring you up to speed. It was created by Martin Gero and begins with a mysterious woman, played by Jaimie Alexander, who wakes up naked in a duffle bag in Times Square, covered with tattoos but with no memory of who she is or how she got there. She does have the name of FBI Special Agent Kurt Weller tattooed on her body, although she doesn't know why, so the mystery woman and Weller, played by Sullivan Stapleton, join up early on to try to piece together what happened. That all sounds great, but, honestly, you had me from "naked in a duffle bag in Times Square."

The Season 2 renewal was announced on Nov. 9, and comes on the heels of a back-nine order (where NBC requests the second portion of the first season) on Oct. 9, bringing the total episodes to 22, and then another increase up to 23 on Nov. 3. So, if you were watching the signs, you weren't totally blindsided by this move, but it's still very exciting. Just ask Jennifer Salke, President of NBC Entertainment, who says about the renewal:

We are over the moon with the success of ‘Blindspot,’ and want to thank our producers and amazing cast for creating one of the most riveting shows on television. Jaimie and Sullivan have done an amazing job of ratcheting up the tension each week in trying to unravel the mystery of Jane’s tattoos. We literally can’t wait to see what the second season will bring.

Very exciting day for everyone involved in Blindspot! Let's all get a tattoo about it together so we never forget it. Oh, wait...

More like this
The Industry Creators Have Already Done “A Lot Of Thinking” About Season 3
By Brad Witter
'Fate: The Winx Saga’s Cliffhanger All But Begs For A Season 3 Renewal
By Brad Witter
We Still Have A Few Unanswered Questions At The End Of 'The Suspect'
By Sophie McEvoy
'Heartstopper' S2 Just Welcomed Four Brand New Cast Members
By Nola Ojomu and Sam Ramsden
Get Even More From Bustle — Sign Up For The Newsletter