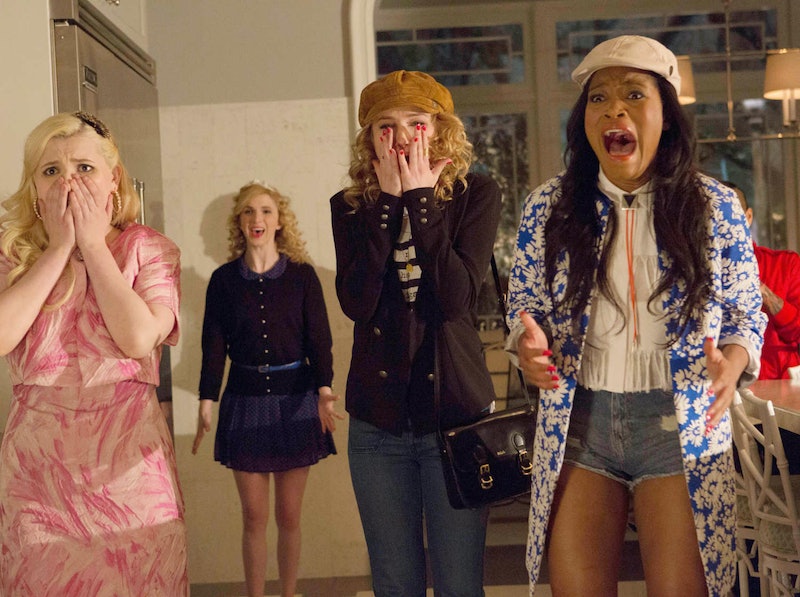 Over the past five days, reporters have flocked to Hollywood to listen to the presidents of America's top five broadcast networks reveal their lineups for Fall 2015. NBC, FOX, ABC, CBS, and The CW have officially confirmed which bubble shows were getting the ax (thanks for the memories, CSI!), which pilots were getting ordered to series (hello again, Muppets!), which returning shows were shifting time slots (welcome to Thursdays, Sleepy Hollow!), and which new shows shows would be premiering when (see you at midseason, X-Files!). Now that the full fall schedule has been announced, it's time to start programming our DVRs — and that's looking like it's going to be quite the challenge this year.

While a lot of things on this schedule look very similar to Fall 2014 — Tuesdays and Thursdays are still the most crowded nights of the week — some things are very different. (One note-worthy change: NBC, the former reigning champion of sitcoms with hit shows like 30 Rock, Cheers, Frasier, Friends, The Office, Seinfeld, and Will & Grace, has been reduced to only one hour of comedy per week — airing on Fridays, no less.) But with 21 new shows crowding the airwaves this fall (and another 24 coming at midseason), there are DVR conflicts galore. What's a TV junkie to do?

Here are the eight busiest hours of Fall 2015 — and my pick for who wins each time slot battle:

Who wins? The CW's only new show of the fall (Arrow spinoff Legends Of Tomorrow won't materialize until 2016) is airing against TV's most popular competition show. CBS is launching its new comic book show against FOX's returning hit comic book show. How to choose? Gotham had a wildly uneven first season and the trailer for Supergirl looks worryingly similar to SNL 's Black Widow parody. But we NEED Supergirl to succeed — we can't give Hollywood executives another excuse to say women can't carry superhero franchises. I'd give the edge to Supergirl, and hope for the best.

Who wins? While ABC and NBC are in Hour 2 of their respective competition shows, CBS will be airing its hottest new procedural from last season against The CW's critically acclaimed telenova, while FOX unveils its adaptation of the 2002 Tom Cruise sci-fi movie. As intrigued as I am by the concept of Minority Report as a TV show, it's impossible to resist the charms of The CW's Golden Globe-winning dramedy. Save yourself for Jane The Virgin.

Who wins? Tuesdays start off with a bang: The revival of a beloved team of fuzzy puppets, TV's most-watched series, The CW's zippy superhero show, a new John Stamos sitcom, and Night Two of NBC's swivelly chairs. Help! Barry Allen is an immensely likable protagonist and Stamos still has the whitest smile in the universe, but the trailer for ABC's reboot gripped me in a vise of nostalgia and it won't let go. Give The Muppets a hand, folks.

Who wins? Marvel's small screen spinoff finally hit its stride in its second season, and looks to be setting up for an equally exciting Season 3. iZombie managed to bring some of Veronica Mars's bite back to The CW. But this one goes to Ryan Murphy's newest horror show, easy. How can you say no to that cast? Not to mention Lea Michele in a neck brace. I scream, you scream, we all scream for Scream Queens.

Who wins? Ouch. This one hurts. It's painful to say no to Bradley Cooper's return to television or variety show hosted by NPH, but ABC's agents-in-training show just looks too damn good to pass up. The trailer is like if someone mashed up a Shonda Rhimes show with Homeland — and it might just be crazy enough to work! I'm definitely sending in my application for Quantico. (This hour is also notable for being the only time slot of the fall filled entirely with new programming.)

Who wins? Who am I kidding? I just wanted an excuse to talk about how amazing Cookie Lyon is again. CBS's and NBC's procedurals don't stand a chance against FOX's ratings-defying hip-hop drama. The Empire still rules, baby!

Who wins? A couple of years ago, Shonda Rhimes' political thriller would have been the easy winner here, but fans have become increasingly disgruntled with the show's focus on the ridiculous B613 plot and Scandal has lost much of its zeitgeist-y steam. The most mystifying presence here is Sleepy Hollow, which captured imaginations in its freshman season and then absolutely tanked with both audiences and critics last year. Why did FOX move the struggling show to the most competitive night of the week? I'm not sure, but James Spader and his ever-present fedoras win by default — unless Rhimes manages to turn things around for Scandal in Season 5. The Blacklist it is... for now.

What's on? How To Get Away With Murder (ABC); Elementary (CBS); The Player (NBC)

Who wins? A veritable Sophie's choice. The most delicious new primetime mystery soap versus Wesley Snipes' first starring role on television. I might be tempted to place my bets on NBC's Vegas-set crime drama, but the peacock network had such a terrible track record with its new programming last season (the only new show from their 2014-'15 season to survive for a second year was the middling Mysteries Of Laura) that I'm going to wait on The Player until I hear positive reports. Plus, I can't wait to see how Annalise Keating one-ups herself in Semester 2. I'm definitely re-enrolling in How To Get Away With Murder.

And now, check out the full schedule. (New shows are highlighted in bold.)