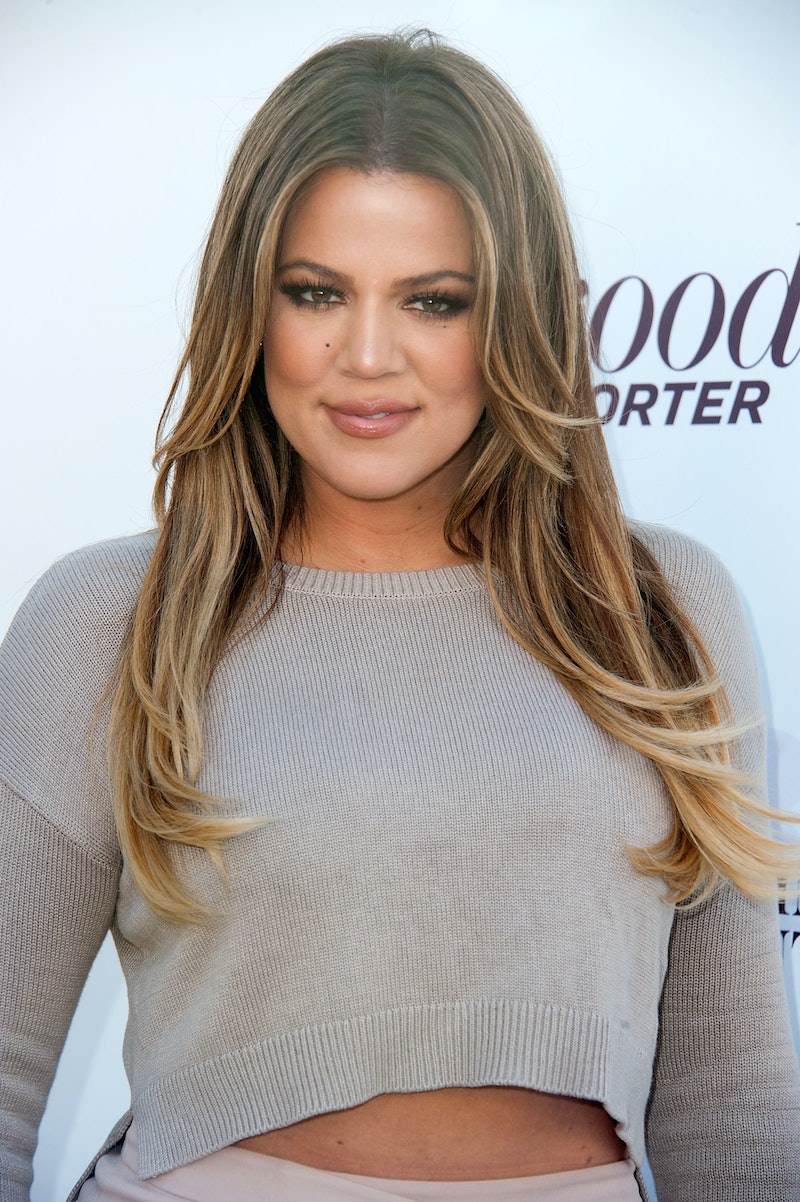 When it was announced that Khloé Kardashian and Lamar Odom decided to retract their divorce papers in the midst of Odom's hospitalization, many fans of the reality TV star and her NBA champ ex immediately assumed that they were getting back together. (Not me. I was all, "Obviously, she's doing it because you want to keep your options open and deal with medical issues in the most responsible way in such a trying time. Duh, coworkers.") And if you didn't believe the 31-year-old when she said that they aren't thinking about getting back together at the moment, maybe you'll be convinced now that there's video of Khloé Kardashian and James Harden out on the town on Sunday night. That's right, video. Khlomar fans cannot deny video of Khlames (I'm testing it out...) together, can they?

To give those of you who don't obsessively follow the Kardashian family some context, Kardashian and Harden were first reported to be dating back in July; although neither has ever officially confirmed the relationship. Then, in October, Odom was hospitalized after being found unconscious at a Nevada brothel. Kardashian has shown immense support for her ex ever since, and because her and Odom's divorce paperwork was never finalized, they decided to withdraw it.

Of course, at this point, fans of the couple were overjoyed. They were getting back together! There would be more seasons of Khloé & Lamar to come! More awkward sexy photo shoots involving candy! More unisex perfumes! For their love was Unbreakable™, and their story marred by tragedy, drama, and truly questionable tastes in interior design would be one for the ages!

Not so fast. For one, the Keeping Up With the Kardashians star explained the decision to call off the divorce to People saying,

It's out in the media that we are back together, but I wish people understood that's not in our thought process right now. There are too many other important things, too many medical things. It's not even in our brains thinking about us as a couple or having a relationship right now ... Tragedy does make you reassess a lot of things, but when it comes to our relationship, it's the same, except I'm here supporting him fully.

If that wasn't enough to convince you that Kardashian and Odom are multidimensional people who can be something other than In A Romantic Relationship or Never Speaking To Each Other Again, may I present you with Exhibit A:

Yep. That's Kardashian and rumored boyfriend Houston Rockets player James Harden. Outside of a club. Having a good time.

And here's Exhibit B: a funny video of Harden that Kardashian posted to Instagram on Monday:

You see, just because Kardashian is going through an extremely tough time with her nearly-ex-husband, it doesn't mean that she can't have other things going on. And I'm sure that's something that Odom understands, and that Harden understands, too. As much as fans might want things to be cut and dry ("The divorce is off! Khloé & Lamar Season 3 must be right around the corner!"), that's not how life works. Now, please, carry on with some more reasonable gossip like wondering what Kardashian's sister Kim is going to name her next child. My money's on West West.