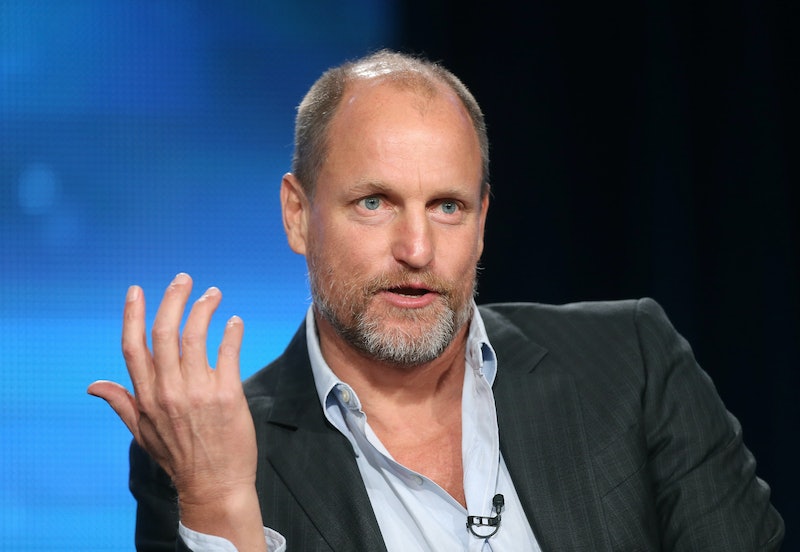 Lots of people dream about getting glammed up to hit the red carpet for a major movie premiere. While us normals may aspire to one day zip into a designer gown or suit to strut a star-studded red carpet, a certain celebrity just said "No, thanks" to the fancy attire part of the night, and the world is losing their minds. Hunger Games actor Woody Harrelson wore pajamas to the Paris premiere of Mockingjay Part 2 , and it's just slightly abnormal for a major movie star. This is seemingly Harrelson's very first time wearing PJ's to a red carpet event, and while he looks totally comfy, he sticks out more than fashionista Effie Trinket did in District 13. Sometimes the boldest fashion decision really is looking like you just rolled out of bed.

Harrelson hasn't commented on his own personal pajama day, which means that it's up to fans to speculate why this star may have chosen the red carpet to unleash his laziest outfit ever. (To be fair, he does get major props for not showing up in a ratty tee shirt and boxers, which is what most of the people in my life sleep in.)

Here are just a few ideas as to why Harrelson rocked PJs waaaay far from his bed:

1. He's Standing In Solidarity With The Districts

District 12 residents pretty much look like they're wearing pajamas all the time, right?

2. His Assistant Forgot To Pick Up His Suit

Ugh, assistants, am I right?!

3. He's Going To Matthew McConaughey's Pajama Party After This

I mean, they MUST have those, right?!

Hey, it happened to Matt Damon enough times. Hiding Harrelson's suit the night of a major movie premiere has the markings of a Clooney prank all over it.

And was in such a daze that he forgot to put on real pants. (Hey, at least he's wearing pants.)

6. He Bet JLaw That He Would Do It

She now has to get Harrelson's face tattooed on her calf.

He thinks the whole thing has gotten really out of hand.

Clearly he needs a stylist to help guide him through these events.

9. He's Woody Harrelson And Can Do Whatever He Wants

You do you, Harrelson. We'll always envy anyone rocking PJs.