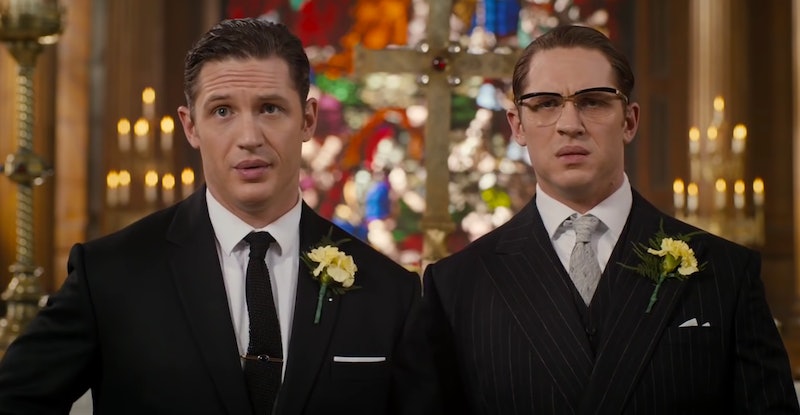 Tom Hardy pulled double duty on his latest film, Legend, playing celebrity criminals and identical twin brothers, Reggie and Ronnie Kray. Known as the Kray twins, Reggie and Ronnie were had a reputation of wreaking havoc in England during the '60s; their crimes ranged from extortion to brutal murders. When it came time to adapt their story for the big screen, filmmakers decided to have one actor play both brothers — à la Parent Trap — instead of casting two unrelated stars. Having one actor play two parts in any movie is a risk, but in order to play identical twins, it's a necessity, and as these photos of Tom Hardy as the Kray Twins in Legend show, it was clearly a worthwhile choice.

Hardy certainly looks the part with his defined jaw and bulky stature, but playing identical twins required the actor to do more than just look vaguely like the real Kray brothers. For Hardy, playing both Reggie and Ronnie Kray required more than the occasional wardrobe change. Though the twins were identical, they grew up to have different features. Ronnie, for example, had a broken nose and was a bit heavier than his brother. The two could also be told apart by their clothing, with Ronnie donning double-breasted suits and glasses. The physical differences between the Kray twins may have been minuscule, but they are vital to Hardy's portrayal.

Unable to magically put on extra pounds in between takes, Hardy made Ronnie look heavier with the help of wardrobe and by changing his posture. To create the broken nose effect, Hardy reportedly stuffed a baby-bottle nipple up one nostril. These small changes helped Hardy transform quickly on set.

Legend director Brian Helgeland (42) said that Hardy committed to the two roles over a meal with Helgeland, when the director was actually only trying to lock him down for the role of Reggie, the more glamorous, levelheaded of the duo. Hardy, however, was more interested in the role of Ronnie, considered the loose cannon. Over the course of the meal, Helgeland decided to abandon the possibility of having two different actors play Ronnie and Reggie, and cast Hardy as both.

"If you're Tom, that's obviously the part that's more appealing," Helgeland told Vulture . "He said, 'You give me Ron, and I'll give you Reggie.' And that decision that was either going to make or break us was made."

Helgeland said that Hardy was so good at differentiating between Ronnie and Reggie on the set of Legend that sometimes the crew would forget it was the same actor playing both roles. "Because that's how different they were. We'd forget ourselves, sometimes. And Tom had to do it from hour to hour," Helgeland said in an interview with Den Of Geek. "We'd start with Reggie in the morning and then we'd do Ron in the afternoon."

Of course, the true test will be when Legend is released in theaters on Nov. 20.