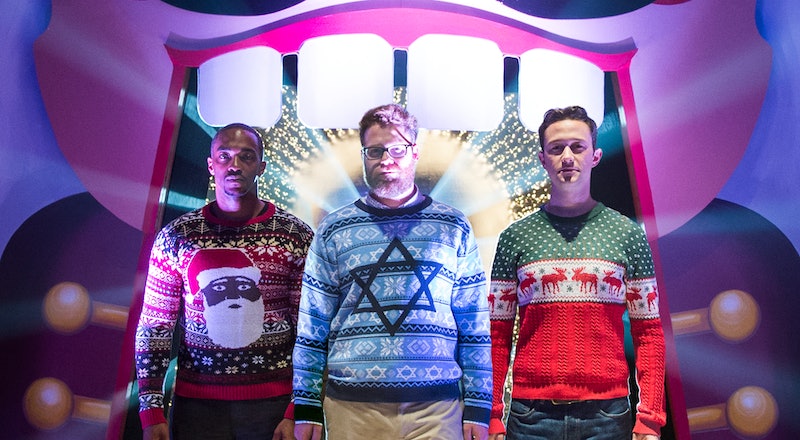 Every year, it seems that around the holidays, at least one new Christmas movie comes along that hopes to secure itself as a classic that bears repeated viewings and a big following. But for every It's a Wonderful Life, there are several more Surviving Christmases. This year's entry into the genre is Seth Rogen's The Night Before , and thankfully it looks like it's trending more toward making spirits bright than being cause for a blue Christmas.

What's so great about the movie, you ask? Well, for starters, it stars Rogen, Joseph Gordon-Levitt, and Anthony Mackie as three best friends who have a tradition of going out every year on Christmas Eve. Now, here's where it get's a little out there. The reason for their outing is to cheer up Gordon-Levitt's character, whose parents died on Dec. 24 14 years earlier. But they've decided that this year's expedition will be the last, as Rogen's character is becoming a father and Mackie's has become a famous star. So obviously, they're pulling out all the stops to make sure their last night before Christmas is their best ever. So what kind of shenanigans should fans expect?

A lot, it turns out. This film looks like it's going to be absolutely bonkers, especially for a Christmas movie, and if done well it could really take the genre to new heights. Here's what's known about it so far.

Ugly Christmas sweaters are such a big deal these days that people routinely throw parties based around them, and this film features its three leads donning them throughout. Gordon-Levitt sports a reindeer-adorned version, while Rogen's features a Star of David (so it's technically a Hanukkah sweater) and Mackie's has a black Santa. All three are indescribably awesome.

Rogen's wife gives him mushrooms and even cocaine to ensure that he has a good time, and it doesn't take long for the drugs to have a serious effect on his well-being.

You can't have Christmas in New York without Jews eating in a Chinese restaurant, and this movie definitely addresses that proud legacy.

Some of TV's Funniest Women

Mindy Kaling, Lizzy Caplan, and Ilana Glazer all feature in this movie, seriously threatening to overshadow the three bros when it comes to laughs.

Who doesn't love a karaoke Christmas?

A Fight With Santa

Gordon-Levitt gets his clock cleaned by none other than Kris Kringle. It's every kid's worst nightmare, acted out on screen for your enjoyment.

The Craziest Midnight Mass Ever

I grew up Catholic, so I'm familiar with the midnight mass. But I've never been to one where someone vomited and then screamed they didn't kill Jesus. I definitely wish I had, though.

Miley Cyrus is already featured in the trailer, but she may be joined by Kanye West. His music is all over the trailer, and he's listed in the cast on IMDb.

JGL In An Elf Costume

He's always had elfish features, now he finally gets the chance to properly show them off.

The Most Epic Christmas Party Ever

You just know the huge party the guys head to is going to be the most insane part of the whole movie, and I can't wait to see what kind of surprises they have in store.

It definitely looks like this will be one Christmas movie to remember, so get ready for TBS to air it every year from now on!