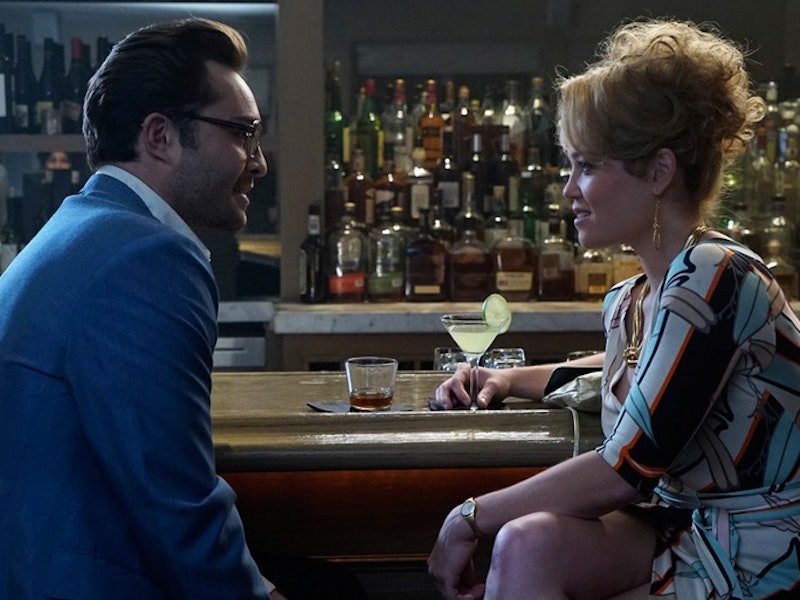 Kent Galloway's modus operandi is so twisted and disturbing that my first thought after the show's premiere was that surely Wicked City is based on a true story. Then I wondered if perhaps I've simply been watching too much American Horror Story, and I felt hopeful that ABC's latest anthology is actually pure fiction — because these are some truly gruesome murders. Although ABC told Bustle that Wicked City is fictional, there's no denying the disturbing parallels between Kent and Betty and a real life couple that terrorized Sunset Strip in the 1980s — Doug Clark and Carol Bundy.

But, first things first. Jack Roth, the beleaguered detective assigned to the case, was recently a key player in apprehending the Hillside Stranglers — and his character is likely based on Sergeant Bob Grogan. The Hillside Stranglers were a very real pair of murderous cousins who killed 10 women between 1977 and 1978 — and, on the show, Kent is using some copycat techniques in order to antagonize Roth. But, his overall method of killing is his very own — he prowls the Sunset Strip looking for victims, calls in a song dedication to the local radio station, stabs them, and then sexually assaults their corpses. (Yikes.)

When Kent first meets Betty, viewers assume that she'll be his next victim. Instead, they team up to commit atrocities together. Like Carol Bundy (no relation to Ted Bundy), Betty is a nurse with an incredibly dark side of her own — and I'd venture a guess that what we know about Clark and Bundy will offer some clues about what may happen on this season of Wicked City.

Clark and Bundy met at a bar in January 1980, according to History.com. After they quickly became live-in lovers, she photographed him sexually assaulting children and listened to him when he spoke of his urges to kill. That summer, Clark abducted, raped, and shot two girls and then tormented their friend by calling her to provide details of the murders. Several weeks later he decapitated one of his victims and brought the head home so Bundy could put make-up on it.

According to the Los Angeles Times, Bundy accompanied Clark as he prowled the city for victims — and she provided him with the gun that was used to kill a sex worker identified as Jane Doe. In August 1980, Bundy told her former lover about the killings — but then she stabbed and decapitated him because she feared that she'd be arrested along with Clark. However, a week later she confessed to her fellow nurses and both she and Clark were arrested.

Clark was sentenced to death for six murders and is currently on death row at San Quentin Prison. Bundy pleaded guilty to two counts of first-degree murder and was sentenced to life in prison — but she died of natural causes in 2003. Louise Farr penned a book called The Sunset Murders in 1992 and she conducted jailhouse interviews with the couple as part of her research. She described the experience as incredibly disturbing:

I had a terrible time sleeping afterward... I made the mistake of spending too long a time with Doug and Carol. I would spend several hours. They're manipulators. They're manipulating all the time. After you leave you have the feeling something's been done to you.

Although Wicked City is fictionalized, there are undeniable parallels to these real life killers — so showrunners should tread carefully in their depictions of Kent and Betty. When borrowing elements from real life crimes, there's always the danger that the killers will be glamorized or given sympathetic treatment. Let's hope that Wicked City avoids that pitfall.