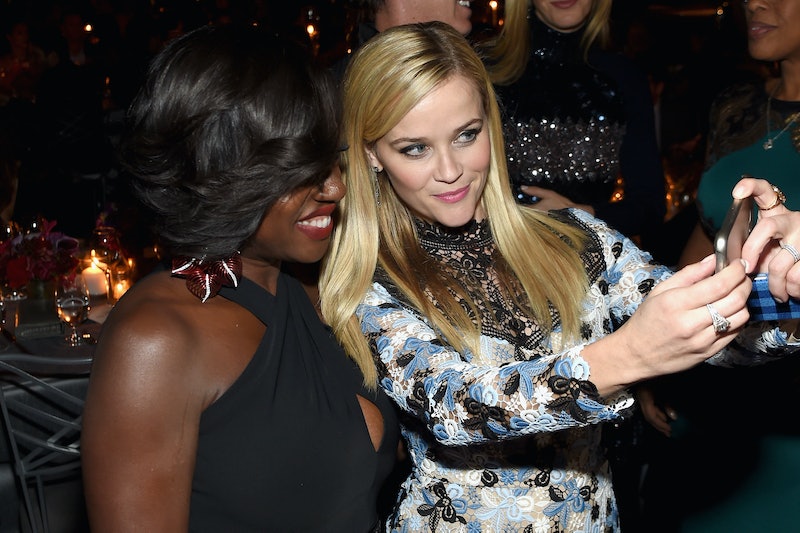 Have you accepted Elle Woods as your personal hero? No? What about Reese Witherspoon? The actress best known for her role as the pink-loving blonde feminist lead character in Legally Blonde gave a speech at Glamour's annual Women of the Year galain which she called out everything from ageism to sexism, encouraging the women in the audience to combat both of these things at every turn and establish — no, demand — their rightful place in the male-dominated world of Hollywood. Reese Witherspoon's 2015 Women of the Year speech is the kind of address that will go down in infamy, the kind of address that people should be talking about with the same respect and awe that we continue to talk about Emma Watson's gender equality speech in front of the U.N. It's the kind of speech that makes you proud, not only to be a woman, but also to be a feminist.

You could tell right from the start that this speech was going to be something amazing when it opened with, "These incredible, inspiring women are doing so many things to change how we perceive women, and I hope Amy Schumer and all the other nominees that, when you consider making your biopic, you’ll give me the rights first... Although Amy, I’ll have to play your grandmother in the movie (by Hollywood standards), and you’ll probably have to play your own mother." Shots fired at Hollywood sexism? Sign me up. But that's far from the most revolutionary, inspiring, and utterly flawless thing that Witherspoon said over the course of the moving speech. Check out the most powerful quotes below.

1. "At the end of the meeting, I sort of casually brought up, 'So how many movies are in development with a female lead?' I was met with nothing, blank stares, excessive blinking, uncomfortable shifting."

This anecdote from Witherspoon strikes a particular chord with me, since I do spend so much time calling for Hollywood to put out more movies with female leads. To know that this strong woman went to the Hollywood heads herself and was met with the kind of confusion she would get if she asked when was the last time her dog walked on its hind legs is such a frustrating thing to realize — and I can't imagine how much more frustrating it must have been for the actress in particular.

2. "Films with women at the center are not a public service project; they are a big-time, bottom-line-enhancing, money-making commodity."

With every movie with a female lead that fails being used as an excuse not to put out any more of them despite how many movies with female leads succeed, going to the movies can be an incredibly exhausting and frustrating experience these days. The fact that we have success stories like Gone Girl, The Hunger Games, and, yes, even Twilight, should usher in change, but it's been slow in coming.

I don't even have a response to this. I just simultaneously want to weep and clap.

4. "I just kind of started wondering lately why female ambition is a trait that people are so afraid of."

This poignant point that Witherspoon makes is one that many people don't particularly think about, but is true nonetheless. Ambition in a woman is often seen as negative or dangerous, as if the sheer fact of wanting something and working hard for it makes a woman undeserving of it. Why is that?

5. "My mother, who is here tonight, a very strong, smart Southern woman, said to me, 'If you want something done, honey, do it yourself.'"

The fact that Witherspoon sites her own mother as such a huge influence on her growing up is sweet, because strong women raise strong women, and it's nice to see her giving that credit back to the woman behind the woman.

6. "These women shaped my idea of what it meant to be a woman of strength and character and humor in this world. And my beautiful, intelligent daughter, who is 16 years old now, would not grow up idolizing that same group of women."

7. "I believe ambition is not a dirty word. It’s just believing in yourself and your abilities."

Can someone please emblazon this on a T-shirt?

8. "Do you know any woman in any crisis situation who has absolutely no idea what to do? I mean, don’t they tell people in crisis, even children, 'If you're in trouble, talk to a woman.'"

Witherspoon has a point not just because there are no women who don't know what to do in a crisis, but because women aren't allowed to not know what to do in a crisis. Women must be everything in every situation, especially a crisis, lest they be considered hysterical or in need of protection from the nearest man who can keep a clear head for them. Assuming they would fall apart in a crisis is just ridiculous. Every day when they leave the house, women are forced to be 10 times stronger than anyone else just to be taken seriously.

And that is what it all boils down to at the end of the day — that the fight for equal representation is something that women don't have the luxury of just forgetting when they go home, because it is something that directly affects them and every woman that will come after them.

10. "Women are underrepresented and underpaid in leadership positions.... How can we expect legislation or our needs to be served if we don't have equal representation?"

11. "Imagine this: What would happen if we were all brave enough to be a little bit more ambitious? I think the world would change."

This line ended Witherspoon's speech, and it is a haunting reflection on the state of society as it is. It is a call to arms for women everywhere to dare to be all they can be, even when people are telling them to stop being so "bossy" or "b*tchy" or "cold." This is a line worthy of a standing ovation, if her entire speech didn't manage to convince you to get on your feet and clap. Witherspoon knocked this one out of the park and reminded us all why she is the only actress we can ever imagine having played Elle Woods.