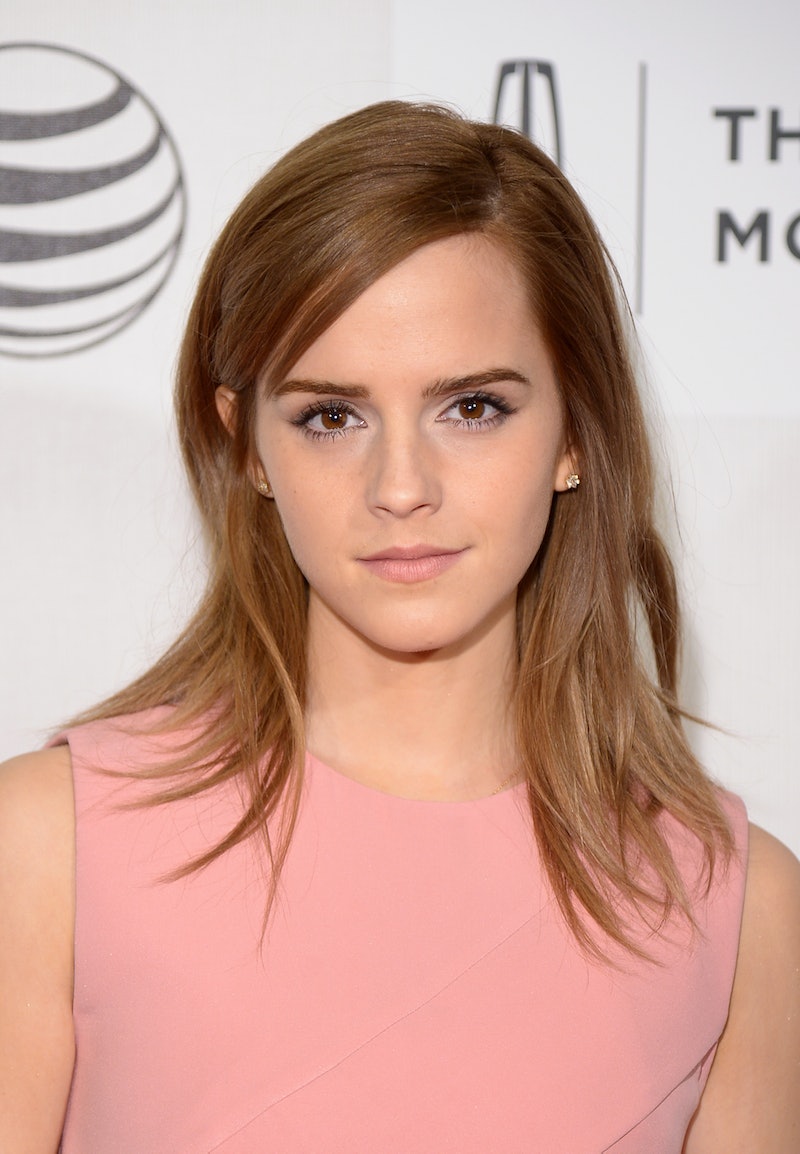 I consider Emma Watson a national treasure, and she's not even from our nation. Although she is best known for playing the role of Hermione Granger in the Harry Potter films, Watson is doing her best to become one of the foremost celebrity faces of feminism in the world. We should have guessed she would be aspiring to do great things when Watson was named a Goodwill Ambassador by UN Women, but "great things" is an understatement for the powerful speech that Watson made for the HeForShe Campaign on Saturday. Her speech was all about gender and equality, issues that still don't receive enough attention (and often negative attention when they do), and it was 10 minutes of pure, unadulterated awesome.

Watson made so many great points during her speech that it's near impossible to praise her for any one aspect. The whole thing was a flawless, personal reflection on feminism, gender, equality, and activism. Like her on-screen counterpart, Watson is standing up for a cause that means a lot to her with lots of self-deprecating humor to match. "You might think, ‘Who is this Harry Potter girl? What is she doing at the U.N.?’ And it’s a really good question — I’ve been asking myself the same thing," she said, making it seem all the more inspirational that she made this speech even through her self-doubt.

It was very hard to narrow it down, but here are the nine most powerful quotes to take away from Watson's speech.

"I have realized that fighting for women’s rights has too often become synonymous with man-hating. If there is one thing I know for certain, it is that this has to stop."

One of the reasons that the feminist movement has stagnated over the years is because feminism has become synonymous with man-hating, as Watson points out during her speech. She followed this by giving the true definition of feminism and, quite honestly, it can't be drilled in enough that everyone, male or female, should feel welcome to be feminists.

"It is time that we all see gender as a spectrum instead of two sets of opposing ideals."

"In my nervousness for this speech and my moments of doubt, I’ve told myself firmly, ‘If not me, who? If not now, when?’"

As we would expect from the woman who embodies Hermione Granger in all aspects of her life, Watson didn't let a little thing like self-doubt stop her from speaking out about what was important to her — and in doing so, she adds a personal touch that urges us to ask ourselves the same questions.

"When at 15, my girlfriends started dropping out of their beloved sports teams, because they didn’t want to appear muscle-y, when at 18, my male friends were unable to express their feelings, I decided that I was a feminist."

"How can we effect change in the world when only half of it is invited or feel welcome to participate in the conversation?"

The HeForShe campaign is about making men feel comfortable in standing up and calling themselves feminists, which Watson powerfully highlighted by pointing out how few men she saw at a feminism rally once. It was the perfect way to extend a hand to both sexes to work on this issue.

"We are struggling for a uniting word, but the good news is that we have a uniting movement."

The word feminism is, unfortunately, still very isolating to people who find it a negative connotation, so for Watson to admit to that struggle and offer HeForShe as a movement even for those who are hesitant to call themselves feminists was a great strategy.

"We want to try to galvanize as many men and boys as possible to be advocates for change."

This was one of the opening remarks of Watson's speech and all the proof anyone who bought into the stereotype needed that this wasn't just going to be another angry feminist rant. This is the kind of opening that makes you want to stop and listen, no matter what negative, man-hating ideas you had about feminism in the past.

"We need more of those and if you still hate the word, it is not the word that is important. It’s the idea and the ambition behind it."

"But my recent research has shown me that feminism has become an unpopular word. Women are choosing not to identify as feminists."

This is another one of the reasons that the feminism movement is stagnating and it was a great thing that Watson drew attention to the fact that even women are denouncing the word as a bad thing. Through this speech, through her efforts, and through the efforts of all of us, it's about time we reclaim feminism and make it a worldwide movement again.

Watch the full 10-minute speech below.

More like this
UK Viewers Will Have To Wait To Watch The Handmaid’s Tale S5
By Maxine Harrison
Megan Rapinoe's Relaxation Hack Is Super Dreamy
By Carolyn Steber
Everything To Know About Taylor Swift’s 10th Studio Album, 'Midnights'
By Grace Wehniainen and Jake Viswanath
How Much Are The 'Schitt’s Creek' Stars Worth?
By Hugh McIntyre
Get Even More From Bustle — Sign Up For The Newsletter