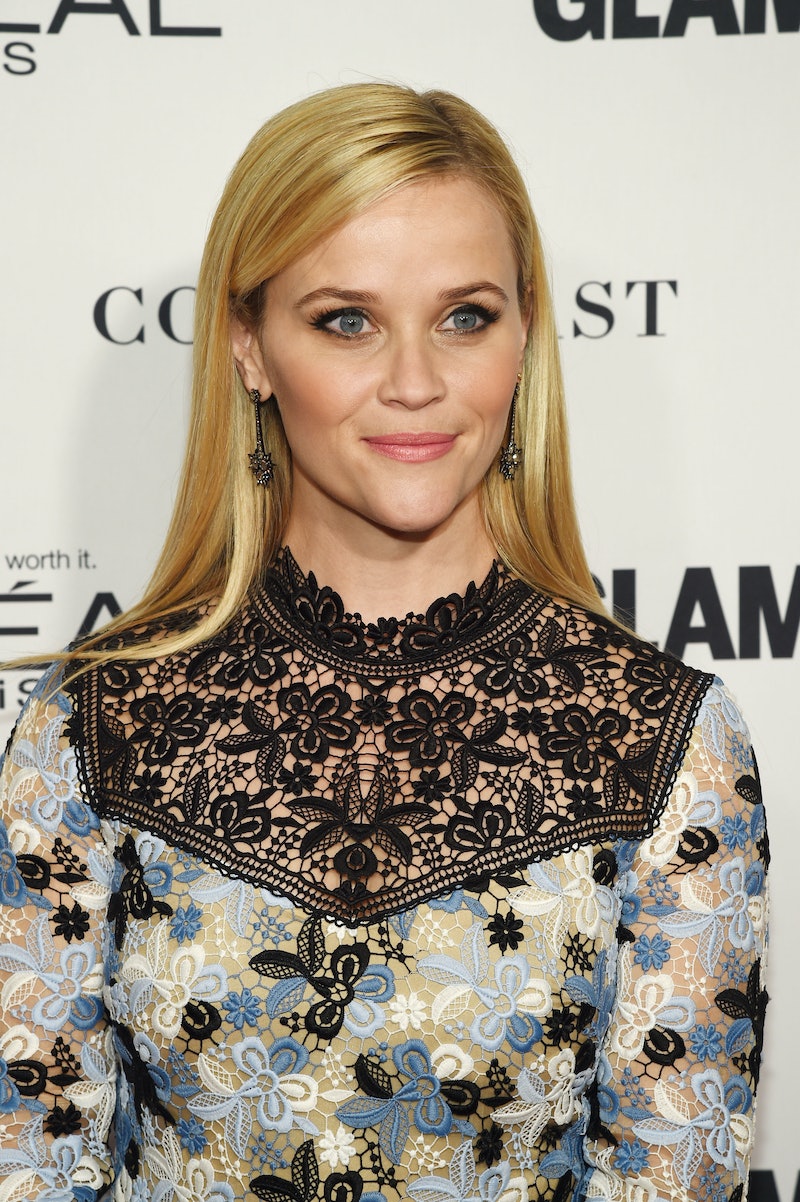 "What do we do now?" As the former Elle Woods explained in her speech at Monday night's Glamour 's Women of the Year Awards, those are the five words Reese Witherspoon the hates most, and hears way too often in movies. “I’m serious,” she told the crowd laughing. “Go back and watch any movie, you will see this line over and over.” These female characters aren't in charge of their own futures; they're relying on someone else to make the decision for them in times of crisis. Sadly, these women aren't much different than the actresses who play them, who are at the mercy of someone else's decision making. Studios, mostly led by men, dictate what role they get to play next, and, often, it is the wife or girlfriend or mother who isn't written in a way that makes them a leading lady or the hero of their own story — they're just supporting the male lead. And Witherspoon decided to do something about it.

The actress, like so many others, knew this was a problem, but she actually took steps to change this phenomenon by launching her own production company, Pacific Standard Films in 2012 "with the mission to tell stories about women." She dared to ask herself that dreaded question that so many women in the movies ask, but she found the answer all on her own — with a little help from mom.

"I’ve made movies all my life, for 25 years, since I was 14 years old. It was time to turn to myself and say, 'OK, Reese, what are we going to do now?' The answer was very clear," Witherspoon said at the fala. "My mother, who is here tonight, a very strong, smart Southern woman, said to me, 'If you want something done, honey, do it yourself.'" Three years ago, Witherspoon started her own production company with partner, Australian producer Bruna Papandrea, to increase the number of films that are written by, directed by, and star women. And, despite many telling her it was a silly idea to make her bottom-line female driven films and to pour her own millions into something that would inevitably fail, she did it and she got an award for it. "I couldn’t turn to some man and say, 'What do we do now?'" Witherspoon remembered thinking. "This is my life." Which is true, but her decision affected so many other lives in the process.

It affected the lives of talented actresses who deserve to be more than supporting players, specifically ones over 30 years old, since, as Witherspoon quickly found out, there's very rarely anything in development for them. “I think it was literally one studio that had a project for a female lead over 30,” the actress told Variety in 2014. “And I thought to myself, ‘I’ve got to get busy.’ ” Most importantly though, Witherspoon did this for young girls, like her own 16-year-old daughter, who deserve to see strong, flawed women on the big screen. She even told Variety that her daughter Ava is the company's fourth staff member, helping them choose the right films. Witherspoon's decision to do what so many seemed to think was impossible actually impacted the world — and it just took two women and a teenager to do it.

To hear Witherspoon tell it, though, changing the world wasn't as tough as everyone wanted to tell her it would be. While she was being told that she would have trouble finding material because those female-driven scripts just don't exist, she decided to just start optioning books she liked. Witherspoon, a self-proclaimed avid reader, wasn't waiting for a great script to fall into her lap; she just found it herself. She liked Gillian Flynn's bestselling thriller Gone Girl, so she optioned it. She enjoyed Cheryl Strayed's memoir Wild so much that she got her hands on the film rights and took on the raw leading role herself. As she points out, these films made billions and led to three Academy Award nominations in female acting categories, including one for herself. That was just year one of her company.

Right now, Pacific Standard has five more books in option. The Liane Moriarty penned novel Big Little Lies, which Variety called "similar to the True Detective model," is heading to HBO and will star Witherspoon and Nicole Kidman as mothers dealing with children gone bad. Witherspoon recently won the rights to Gayle Tzemach Lemmon’s book Ashley’s War: The Untold Story Of A Team of Women Soldiers On The Special Ops Battlefield, which follows the creation of a 2010 pilot program by the U.S. Army Special Operations Command that allowed elite female soldiers on the battlefield with Green Berets and Army Rangers in Afghanistan. Lieutenant Ashley White would become the first member of this team killed in action. The company is also working on a movie based on the 2015 novel Luckiest Girl Alive by Jessica Knoll, which focuses on a woman whose life seems perfect, but is anything but. “The hero of the book is a wily, intelligent, complex narrator," Witherspoon said in a statement. "This character and the thrilling narrative that she drives are exactly the kind of story our company, Pacific Standard Films, wants to produce.”

It's clear just from these few examples that Witherspoon doesn't have a checklist for what kind of female movies she will make. She just wants to make them. She also doesn't have expectations for her female characters. They just have to be real. "We have over 25 films in development and three television shows, and they all have female leads of different ages and different races and different jobs," Witherspoon said. "Some are astronauts, some are soldiers, some are scientists, one is even a Supreme Court justice. They’re not just good or bad; they’re bold and hunted and dangerous and triumphant like the real women we meet every single day of our lives."

Those are the kinds of role female moviegoers want to see, which is clear from the mix of women who ruled the box office this year: Amy Schumer's confused in relationships magazine writer in Trainwreck, Melissa McCarthy's 007 in Spy, the Barden Bellas of Pitch Perfect 2, Jennifer Lawrence's arrow-wielding Katniss Everdeen in The Hunger Games franchise. "Films with women at the center are not a public service project," Witherspoon said. "They are a big-time, bottom-line-enhancing, money-making commodity."

Many still think of Witherspoon as Elle Woods, and, in some way, she has become an Elle Woods for Hollywood: fighting for the rights of those who need to be defended. "But like Elle Woods," Witherspoon explained of her Legally Blonde character, "I do not like to be underestimated." So what about that demeaning question of "what do we do now?" Well, Witherspoon thinks it could actually be an important one for real women, who have felt as if they've been underestimated. "Wouldn’t it feel really good to prove them all wrong?" she asked. "Because I believe ambition is not a dirty word. It’s just believing in yourself and your abilities. Imagine this: What would happen if we were all brave enough to be a little bit more ambitious? I think the world would change."

I can't help but agree with you, Reese. And, what's more, through your actions, you have proven that every woman can change the world with hard work and a lot of nerve.