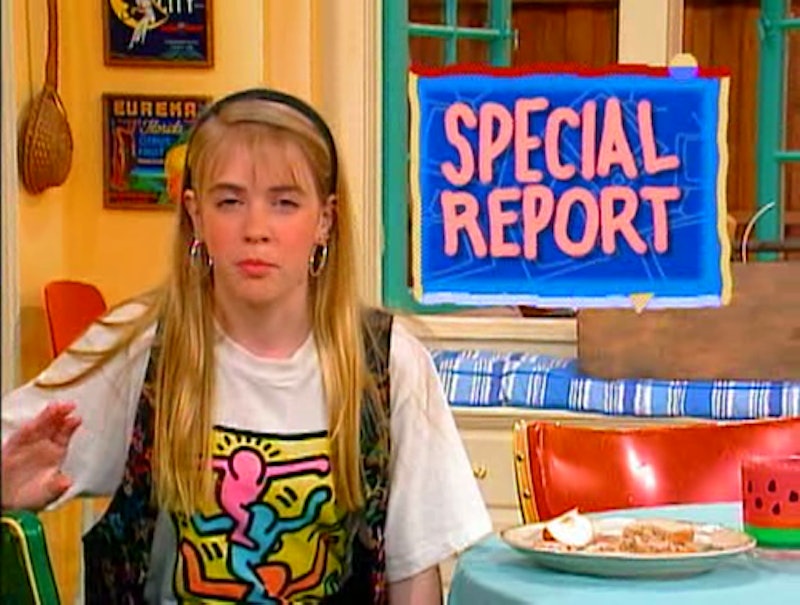 After nearly 25 years, early-'90s Nickelodeon fans are finally getting the sequel they've been waiting for. No, I'm not talking about the possibility of new Rugrats or Hey Arnold! episodes. Series creator Mitchell Kriegman has written a Clarissa Explains It All book that gets too racy for Y-7. Hold onto your scrunchies, folks: Clarissa Darling is all grown up.

Things I Can't Explain picks up in Clarissa's mid-20s. She lives in 2015 New York City — no, it doesn't add up, just go with it — and works in the thoroughly modern field of digital journalism. It's sort of an extension of Clarissa Now, a short-lived, 1995 series in which Clarissa relocated to NYC for a newspaper internship.

The book follows Clarissa as she navigates life before 30, including choosing between two different romantic candidates: that Cute Coffee Guy from around the corner and Sam.

Something changes when Clarissa and Sam turn 18, although it seems neither of them is exactly sure how or why the shift takes place. All they know is that they really want each other, so Sam parks his truck one night and they get steamy on the bench seat:

A few blocks later Sam pulled over into the parking lot behind Reveille Church, and the sexual buzz was so thick it seemed like the composition of the air around us had changed. I was trembling, shivering. His hands drew my hips toward him, sliding me closer across the red pickup's comfortable bench seat. We grabbed each other, gasping and hungry for each kiss, his fingers pulsating, pulling at the edge of my jeans. Every smell and taste overwhelmed the next.

Aside from the fact that I totally believe those two deserve better than parked-car sex for their first romp, it's actually not as weird as it sounds. There have definitely been stranger romances in tie-in novels. Like when My So-Called Life Goes On had Brian lose his virginity to Rayanne's mother. Yep, that happened.

Clarissa and Sam always had chemistry, though, and it's not uncommon for an elementary school friendship to turn into something more in high school or college. In fact, given that Clarissa Explains It All aired from 1991 to 1994, it's likely that the couple is your original OTP, and that's really saying something.

Things I Can't Explain drops a few more bombshells in addition to Clarissa/Sam truck-sex. For example, can you believe that Ferguson is in jail? Or that Clarissa's mother has made millions off of tofu glue?

If all that seems far-fetched, I beg you to remember just how ridiculous Clarissa Explains It All was. That show was the proto-Lizzie McGuire, and it was breaking the fourth wall before The Office made that practice into a television staple. Its whimsy, harmless fun, and Blossom-esque protagonist were all just part of its charm.

To catch up with Clarissa, Sam, and the rest, pick up Things I Can't Explain, available Tuesday from your favorite retailer.

More like this
'Mayfair Witches' Already Changed 2 Major Characters From The Books
By Grace Wehniainen
Who Is Murray Bartlett Dating? 'The Last Of Us' Star Is Extremely Private
By Alyssa Lapid
This 'Gossip Girl' Wardrobe Error Has Gone Viral On TikTok
By Alyssa Lapid
All The ’70s Easter Eggs You Missed In 'That ’90s Show'
By Grace Wehniainen
Get Even More From Bustle — Sign Up For The Newsletter
From hair trends to relationship advice, our daily newsletter has everything you need to sound like a person who’s on TikTok, even if you aren’t.