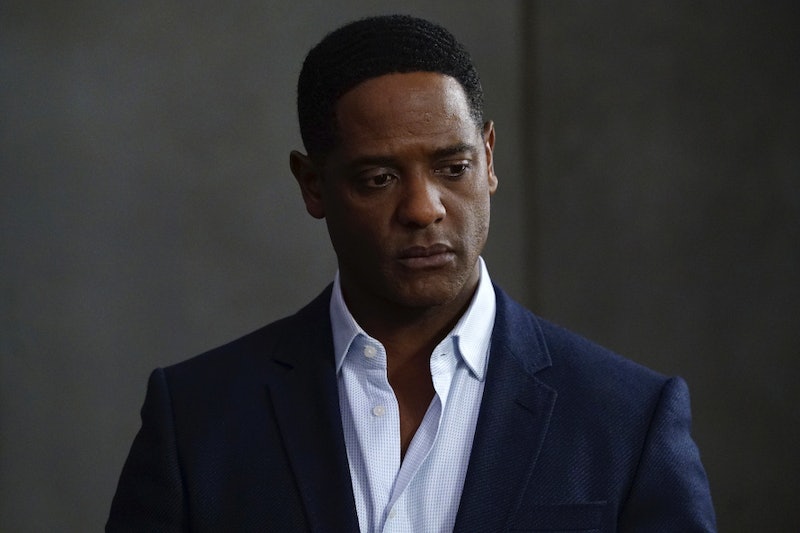 Man, Agents of S.H.I.E.L.D. sure has mastered the art of the heartbreaking reveal. In "Among Us Hide," we finally found out the super-secret human alter-ego of the murderous Inhuman the team has been tracking... and it turns out that none other than (the former) Mr. May himself, Doctor Andrew Garner, is Lash. Yep, Agent May's ex-husband (who, it should be noted, she still has some major unfinished business with) has been moonlighting as a violent vigilante. May's heartbreak at the reveal was clear, but the whole concept of Andrew-as-Lash left a lot of questions open — chief of which is, can he be "cured"? Is there a way to stop the Inhuman-killing without killing the Inhuman himself?

We know the ATCU for one is working on a cure — Rosalind Price said as much to Coulson. In fact, she even went so far as to compare the newly terregenesized Inhumans' powers to her departed husband's cancer. There's also Simmons to consider, now that she's back from being shipwrecked on an alien planet. She was able to create wristguards that prevented Daisy from using her Quake powers, so it's entirely possible that she could create some sort of inhibitor to prevent Andrew from transforming into Lash.

But is either of those really a viable option? We know Rosalind's not exactly on the up-and-up morality-wise (hey, we all saw the inhumane Inhuman gel pods), and Simmons and Daisy have both been through the emotional turmoil that comes with suppressing powers that aren't meant to be suppressed. I have trouble believing they'd do it again, even for a threat as dangerous as Lash.

There's also the fact that Andrew/Lash most likely doesn't want his powers taken away — we don't know exactly why he's killing his fellow Inhumans, but there seems to be a method to his madness. Historically in Marvel comics, Lash executed Inhumans he deemed unworthy of their powers, so I'm inclined to believe this new version of Lash works in a similar fashion. With Garner's extensive psychological know-how and S.H.I.E.L.D. connections, he's in a prime spot to judge who should have powers and who shouldn't. Heck, he might even see his Inhuman slaughter as a service — maybe he thinks he's keeping people safe. Of course, it's possible that his powers are uncontrollable (like Dr. Jekyll and Mr. Hyde), but seeing as we all saw him very deliberately transform pre-Hydra convenience store blow-up, I'm thinking that's not likely — the dude seems like he knows what he's doing.

That said, if Andrew doesn't want his powers cured/suppressed/controlled, I think we can safely bet the whole S.H.I.E.L.D. team is going to take it hard. First off, there's May, who still loves him. There's also Daisy, who's heavily relied on Garner throughout the acquisition of her new powers, and Coulson, who fostered a decades-long professional relationship with the guy. In short? We may not know how Andrew feels about being Lash, or if he can be "cured" of his super-powered murdering sprees, but we do know that there's going to be a lot of emotional turmoil at play — as only S.H.I.E.L.D. can serve it.