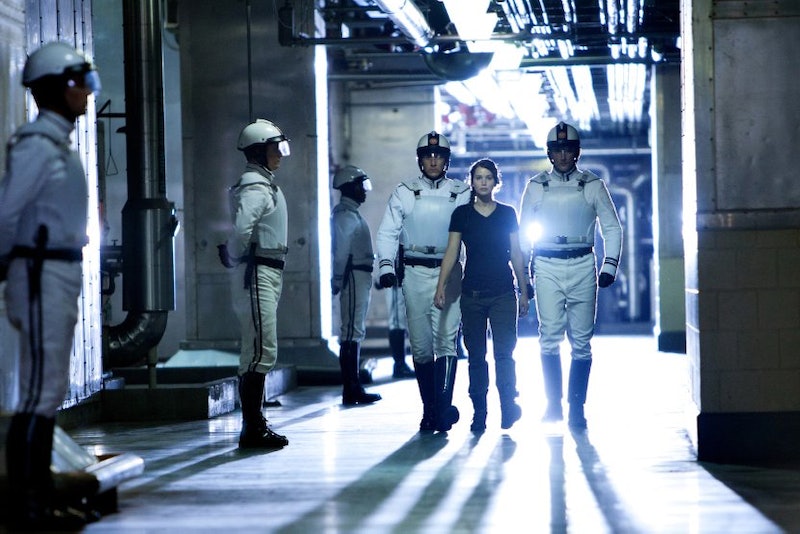 At the close of Catching Fire, the second installment of the Hunger Games series (novels and books alike), Katniss is abducted from the Hunger Games arena. The story ends abruptly. When she wake sin Mockingjay, she finds herself in an underground bunker. This is the Hunger Games ' mysterious District 13. Long thought destroyed by the First Rebellion, District 13 houses its inhabitants underground in a tense truce with the Capitol — as long as they don't provoke President Snow's regime, District 13's population is left undisturbed. But underground, they begin to muster strength to challenge the Capitol's absolute reign under the guidance of President Coin (in the movie, this is Julianne Moore's character). What happens to District 13 once the events in Mockingjay begin to take shape?

Buried under the rubble of seeming destruction for decades, District 13 remains shrouded in mystery. It was once the hub of nuclear development — as each of the districts has its own industry, nuclear technology was that of District 13. This made it a dangerous target for the Capitol, and prompted the compact that District 13 would be exempted from the annual Hunger Games so long as its inhabitants stayed under ground and didn't antagonize the status quo. District 13 is the hotbed of revolutionary activity — it's where the First Rebellion began, and in some ways, it's also the locus of the Second Rebellion. So it's worth wondering what happens to the district by the end of Mockingjay. But I'm getting ahead of myself. Let's take a look at the illustrious history of District 13, from past to present. (Fair warning, there are more than a few spoilers ahead, both for Mockingjay – Part 1 and the Mockingjay novel.)

Before the First Rebellion, the districts each had a primary industry. The industries worked together to supply each other and support Panem's economy. According to reports, District 13's industry was supposedly graphite mining — though this was actually a cover for its main industry, developing nuclear technology. Basically the same thing, right?

The First Rebellion, And A Nuclear Face-Off

During the Rebellion, the Capitol threatened District 13 with the nuclear arsenal the district itself had developed. District 13 managed to seize control of the weapons, but the inhabitants fled underground amid a cease-fire with the Capitol. From underground, District 13 has been unable to counter the narrative that the Capitol publicized from the days of the first Hunger Games, that Panem's last district had been entirely destroyed in the rebellion and a radioactive wasteland was left in its wake.

Though we readers — or viewers — don't know it till later, the residents of District 13 have been hard at word in the 75 years since the First Rebellion, reigniting their industry and mustering forces to take on the Capitol. They're under the leadership of President Alma Coin, a silver-haired Julianne Moore for those Mockingjay – Part 1 fans, who hopes to succeed President Snow as the leader of Panem.

While District 13 attempts to build a society underground, its forces find their way into the Capitol. The (seemingly) dastardly Head Gamemaker Plutarch Heavensbee (Phillip Seymour Hoffman) will eventually become a District 13 leader and its head of propaganda. He occasionally alludes to the brewing revolution, though Katniss predictably doesn't want to hear it from a man she perceives as the face of all that's wrong with the Capitol's regime. It all fits together later.

In Catching Fire, Katniss learns that, though the Capitol frequently airs footage of what appears to be the smoldering rubble of District 13, the televised slot constantly re-airs the same footage. As indicated by the same mockingjay that flits along one corner of the screen, it appears that there is something to hide where the remains of the district are reported to be located.

Instead of turning on each other, Katniss teams up with fellow victors in the arena to short-circuit the entire Hunger Games. And when the entire arena is set alight, Katniss, Finnick Odair, and Beetee are quickly airlifted out of the space and taken to District 13 — but the leaders of District 13 fail to rescue Peeta along with them.

Things Get Complicated For District 13

This is the part where I feel obligated to warn again for spoilers ahead. When Katniss wakes up in District 13 at the outset of Mockingjay, she finds a strictly regimented lifestyle in which each resident is trained for eventual battle. The sabotage of the Hunger Games arena, it turns out, is essentially a declaration of war on the Capitol. The Capitol plans a retaliatory strike, and it's only thanks to a televised warning by Peeta, still trapped (and brainwashed) in the Capitol, that the District 13-ers have an eight-minute head start to get to their bunkers.

The Residents Of District 13 Pick Up Their Weapons

Following the bombing, as well as successful rebellions in several other districts, the residents of District 13 — or at least, the notable ones — take on the Capitol. While Peeta, Katniss, and Commander Boggs only visit the Capitol on a routine propaganda assignment, they're attacked, sparking a spontaneous attack on the Capitol that the rebels ultimately win. Katniss's sister Prim is killed during the battle. It turns out that the Capitol bombing that killed Prim was orchestrated by Coin, though she intended it to look as though Snow had plotted it to turn Panem against him. (Or so Snow argues to Katniss.)

The Aftermath Of The Second Rebellion

More disturbingly, President Coin plans to maintain the same dictatorial power that marked Snow's rule, organizing a Hunger Games-like event for the Capitol's children rather than those of the outer districts. Katniss turns against Coin when she's scheduled to execute Snow, assassinating District 13's president instead of the Capitol's president. A riot ensues, and Snow, too, is killed. Katniss is found not guilty of Coin's murder by reason of insanity and she and Peeta relocate to District 12. Though District 13's president has been killed, it seems reasonable to guess that its inhabitants are finally allowed above the surface of the earth once more and the district is folded back into a more democratic Panem.

Though occasionally trite, the conclusion of Mockingjay is a happy one, where the boy and girl end up together and the political situation has stabilized. Both Peeta and Katniss continue to suffer from the aftereffects of the violence they've witnessed and perpetrated, but they're in it together. District 13 plays a critical role throughout Mockingjay, but the key characters never return to the site of the revolt. Perhaps the knowledge of the industry that has developed in the district keeps its neighbors at arm's length.