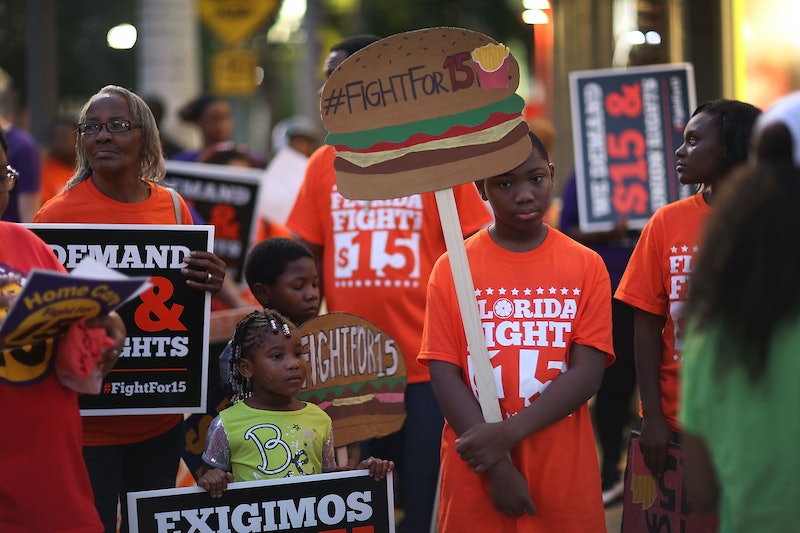 Powerful photos from nationwide protests inspired by the Fight for $15 campaign — a labor union-backed movement committed to raising the minimum wage — shed some light on the individuals behind the movement, as well as what they face on an every day basis. Last year, labor unions poured $24 million into the campaign, which almost matches the amount donated by the labor unions to support Obama's election in 2008, according to Department of Labor data. And in this campaign, the "power in numbers" phrase applies to people, as well as to the money behind it.

Early Tuesday morning, supporters gathered in almost 300 cities to employ some political leverage and push for a better quality of life that cannot be attained by the current minimum wage. According to USA Today, more than 64 million low-wage workers will vote in the upcoming 2016 presidential election. The movement has gained media attention mainly at fast food restaurants like McDonald's, but employees from other industries, including retail and manufacturing, are involved as well.

Since the rallies began Tuesday morning, protesters are beginning to see success. A McDonald's in Pittsburgh shut down due to the strike, and the impact didn't go unnoticed by the city's mayor, who has agreed to increase the minimum wage.

The movement has gone beyond local government, with head nods from presidential candidates, such as Bernie Sanders.

Here are some moments from the nationwide protest you definitely need to witness to understand its scope.

In addition to protesting the minimum wage, which makes meager living conditions difficult to attain, Fight for $15 goes beyond fast food workers and minimum wage. It brings attention to the treatment of workers from a variety of industries and intermingles with a number of diverse social justice movements.

Lastly, these images help to illustrate the economic disparity driven by large gaps in wage. If such disparities remain unsolved, the workforce itself will begin to dwindle.