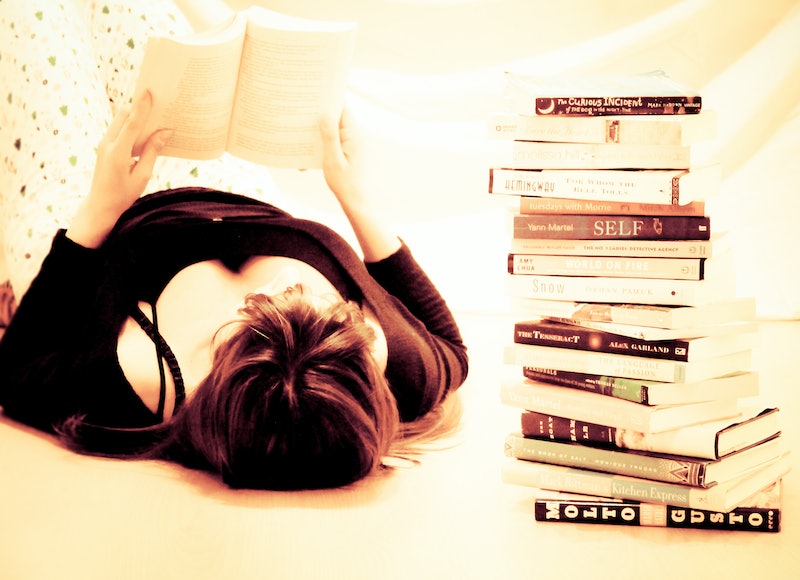 In those early years of book discovery, most of us read voraciously and indiscriminately, picking up everything from Animorphs to John Grisham to Jane Eyre (even if you didn’t really get it back then). But as you get older your tastes start to solidify. Before you know if, you’re sticking pretty religiously to the classics, or maybe you’ve settled in as a hardcore history buff, or you might have an enviable science fiction regimen.

There’s nothing wrong with knowing what you like, but it’s also good to branch out every now and then. Sure, when you know you’re a die-hard for historical fiction, it can be tough to risk waiting to dive into the next Hilary Mantel novel in order to try a new author that you might not even like. After all, there is only so much time in the world and so many books. But never fear, you don’t have to go forth blindly into the pages of a new author’s books.

There are some authors that you’ll love no matter what your favorite genre is. Some of them are great because they tackle several different genres and you’re bound to find something you’ll love. Others are just all around amazing, and you’ll love their work even if it’s not usually your thing. These authors are worth roaming over to a different section of the book store for.

If you love books, you’ll love Vila-Matas, because books is what he writes about. If one had to give him a genre, it’d have to be something like Book Lover Fiction. Seriously, almost every one of the author’s books obsesses over various authors and processes of writing and reading. Not only will you learn a thing or two about some of your favorite authors, you’ll also get introduced to new authors that you’ll be running to the bookstore for, and you’ll find yourself sympathizing with his book-crazy characters.

A dose of magic, a bit of realism, and a dash of detective work — that’s the rough recipe for Julavits’ most popular work The Vanishers. But mostly it’s just a really fascinating story that will pull any reader into its world of psychic academics. Actually, that description (minus the psychics) would work for most of work. They really are their own genre of stories that play with the possible and impossible in a very realistic setting, and (always) with a bit of detective work. Julavits does something unique and unputdownable.

Maybe horror isn’t your thing, in which case you can always turn to The Dark Tower series. If western sci-fi mashups aren’t your thing either, there’s always The Green Mile, and if tear-jerking magical realism isn’t your deal, then King’s also put his pen to comics, non-fiction, and even, recently, a bit of historical fiction. Take your pick!

OK, look. You don’t have to admit that you actually really enjoy “chick flicks,” or that you secretly binge-watched The Vampire Diaries when your roommates were gone for the holidays. Gabaldon might not be Tolstoy, but a long series of time travel and era-spanning romance and historical what-ifs? Gabaldon's famous Outlander series is basically like Doctor Who (and you love Doctor Who, you just don’t know it yet), except you don’t have to wait for the new episode every Sunday or be all sad after it ends after an hour.

Chinua Achebe writes books so good that you seriously consider taking your already-worn copies off of the shelf and rereading them every time you find yourself scouring your shelves for your next book — except, you kind of already read all of them five times each, and, for goodness sake, there are so many books you still have to get to. Fast-paced but beautiful and completely immersive, Achebe’s stories are hard not to love and reread over and over again.

Jemisin writes hard-core fantasy. So, if that’s your thing, you’re in luck. If it’s not your thing, then know that her hard-core fantasy is also full of analogies to the complicated histories of our real world, but they don’t hit you over the head with it or sacrifice the incredible worlds she builds or the dynamic characters in her stories just to make a point. Every character feels real and very human (even if they're not, technically). You might think you don’t like fantasy, but give Jemisin’s works a try (I recommend her latest The Fifth Season), and you just might surprise yourself.

Just try to find someone who doesn’t like Neil Gaiman’s books. It's probably somewhere near the realm of impossibility. Even if you’re the most hard core non-fiction fan, or you just hate the idea of magic in your books, when you crack open a Neil Gaiman novel (or comic book), you’ll be instantly transported, and when you come out the other side, you’ll be a Gaiman fan.

Don’t worry, you don’t have to go and read Infinite Jest. But Wallace’s essays are a whole other story. Even if you think you don’t like essays, if you stick stubbornly to the realm of fiction and fantasy, you’ll be won over by Wallace’s non-fiction. It’s never dry (except for the occasional dry humor), and it’s always completely absorbing. You never thought you’d ever be interested in reading an essay about a child tennis star (I certainly didn’t) until you read David Foster Wallace’s witty take on it.

Admit it, you love that kitschy thing he does with all the overlapping, inter-weaved characters and timelines and stories. It’s freaking cool and he’s an expert at it. Mitchell’s books live in some sort of no-man’s land between sci-fi, fantasy, and realism, and it’s garnered him a wonderfully wide-spread readership. It doesn’t hurt that’s he’s also a pretty great writer and is able to write characters from different time periods, countries, cultures, and linguistic styles so convincingly that he must spend years researching before ever picking up a pen.

Try to find someone who’s read Ferrante and hasn't come down with Ferrante fever. It’s not possible, because the moment you start reading you’re instantly sucked into what will be one of the best reading experiences of your life. I can’t say what exactly it is about her books that makes them so darn good, but no one else seems to be able to put a finger on it either. The writing’s incredible, the story of the Neapolitan series is riveting, sure, but it’s more than that. Reading Ferrante is an experience, no matter what kind of story you tend to like. Just do try to get past those embarrassingly ridiculous book covers.

Think you hate history books? Wait until you read history written by a poet. Galeano’s famous Open Veins of Latin America is probably the most beautifully written history book you’ll ever read. Then, there are his some 40 other books of poetry, super short stories, history-infused vignettes, and, of course, one history of soccer, all of them written with the careful attention to beautiful imagery and rhythm that only a poet can pull off.

An author of fiction, non-fiction, and poetry, Baldwin already captures several genres, so it’s likely some of his work just might fall into the genre you like anyway. But besides that, he’s a pretty darn incredible writer. There might not be much in the way of science fiction or fantasy in his books, but the way he describes life, real or fictional, is truly magical.