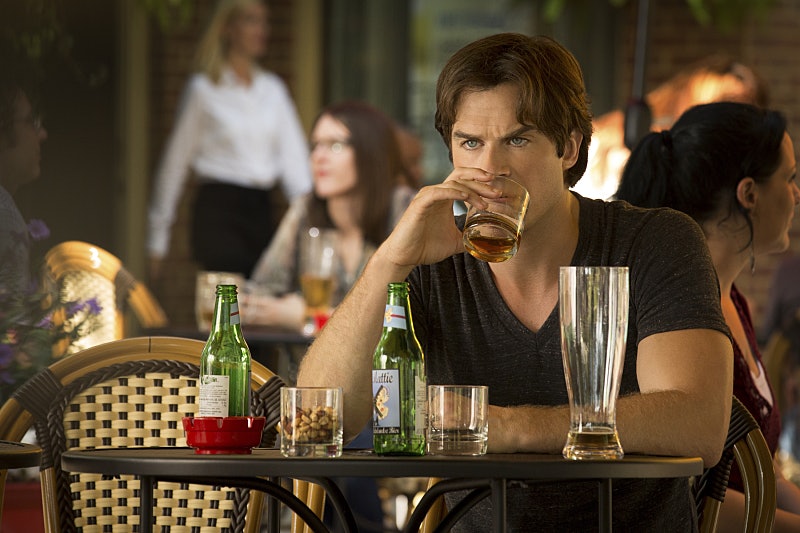 I'm going to miss Elena as much as the next The Vampire Diaries fan, but it looks like her Sleeping Beauty routine is totally giving Damon his groove back in the new The Vampire Diaries teaser. Since his beloved isn't dead, Damon hasn't gone full emo — instead, he is all about embracing his snarky side, and oh, is it a glorious sight. With Mama Salvatore taking over Mystic Falls this season, Damon needs to be the reluctant, smirking pseudo-hero fans have come to know and love — I mean, there are going to be so many truly ruthless vamps in town in Season 7, Damon will have no choice but to embrace his darker side and it is going to be delicious.

Damon's flawless sass isn't the only thing the teaser has to offer. There's also a sneak peek at Alaric (who has somehow managed to not lose his mind after the tragic events of the Season 6 finale), Caroline bemoaning the weirdness of their lives in Mystic Falls, and some serious Stefan and Caroline kissage.

On the other hand, Damon drops his towel, so he wins this teaser hands down.

Prepare to fall in love with your favorite bad boy vampire all over again because TVD has unleashed the Damon of your dreams on Mystic Falls. Here are all the ways Damon is going old school this season (plus the new teaser!).

You know things are looking up for the Salvatores when they actually hang out together. OK, so it means there's an impending catastrophe — but Damon has always loved his little brother and he's actually showing interest in Stefan's love life without an ounce of jealousy. He asks if Stefan and "Care Bear" are a thing. It is as adorable as it sounds, and further proof that Damon is getting back in touch with the guy he used to be.

Try not to drool as Damon literally drops his towel to annoy Alaric, and focus instead on the part where Alaric and Damon are bantering like an old married couple again. Whenever Damon and Alaric hang out, The Vampire Diaries becomes a thousand times better than it already is. The prospect of these two unlucky in love fellows living together fills me with joy. Damon won't treat Alaric like he's breakable, and that is a good thing. The more Damon treats Alaric the same as always the more likely Alaric is to get back on his feet after losing his wife and unborn twins. As an added bonus, Damon gets quality best friend time without sacrificing his edge. Everybody wins.

I'm going to take the whole Damon waking up in a coffin thing as a metaphor for his rebirth of awesomeness. I mean, he does follow it up by declaring he's back, so it's a pretty safe assumption that is the vibe the teaser's editors were going for. As charming as Damon in love was to watch, there is a lot to look forward to in Damon 2.0. He's still going to have Elena's influence, but he's also free to be as reckless, funny, and trouble-making as he wants to be. The season feels like it's going to be the best yet, and I've only seen about 15 seconds of footage.

Having Damon return to form is the best thing The Vampire Diaries could possibly do after losing Elena. He is the show's anchor now, and while he's not exactly the same guy fans met in the pilot that's a good thing. His devil may care attitude may be more of a front now, but his well-crafted comebacks and sexy smirks are still 100 percent authentic. The only thing that could have possibly made the teaser more Damon-tastic would have been a scene with Bonnie, but I guess they had to save something for the premiere.

More like this
Will Vampire In The Garden Get A Season 2? What To Know
By Kadin Burnett
Pete Davidson & Kate McKinnon Are Part Of A Reported Major SNL Cast Shakeup
By Brad Witter
Billie Piper Just Confirmed 'I Hate Suzie’s Festive Return
By Kayla Blanton and Shahed Ezaydi
Grey's Anatomy Fans Refuse To Accept Kaimelia's Shocking Relationship Update
By Brad Witter
Get Even More From Bustle — Sign Up For The Newsletter