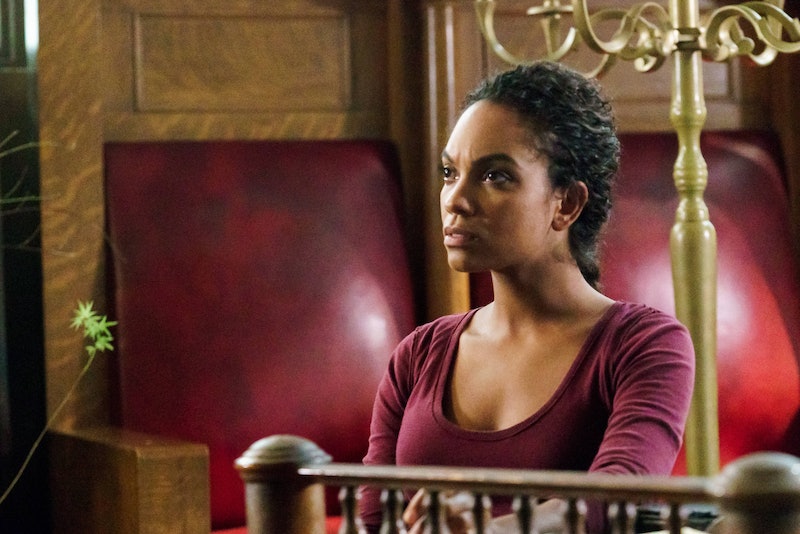 Messing with ancient artifacts can lead to some pretty serious consequences — a lesson Jenny Mills experienced firsthand during last week's episode of Sleepy Hollow. Now that the red gem (located inside the Shard of Anubis) has been absorbed into her skin, it won't be along until she starts experiencing some supernatural side effects. (Something tells me those nightmares are only just the beginning.) Luckily, I was able to chat about such matters with Jenny Mills herself, Lyndie Greenwood, who dished out a few Sleepy Hollow Season 3 spoilers about what fate lies in store for her character.

"This week we will definitely dive right into that story, so it's not going to remain a mystery for long," Greenwood reveals. But before you start thinking that this is just yet another demonic possession story, the actress assures us that whatever is happening to Jenny will be a concept that's completely new to the show. "I don't want to say too much about where it's going, but it's different from what we've seen before, I'll say that. It's not like a similar storyline to anything that we've ever seen." So considering Jenny has already succumbed to possession once on Sleepy Hollow, there may be something even more sinister in the works here.

Either way, Greenwood assures fans that this storyline will take the series in a completely different direction from the path that we're on. "It's a huge turning point, actually."

How will this effect Joe and Jenny's undeniable chemistry? While Greenwood can't reveal whether or not the relationship will turn romantic, she does promise that this most recent plot twist will have a significant impact on the dynamic duo. "I think one of the interesting things that comes out of this crazy Shard of Anubis story is what happens with Joe and Jenny." Consider me officially intrigued!

As for what else we can expect to see throughout the hour on Thursday night, Greenwood teases that we'll start focusing more on Pandora's roll in all of this and whatever devious plans she has in store for our Sleepy Hollow squad. "I believe in this episode and in the one after that we learn more about our big bad this year, Pandora," Greenwood says. "We're going to learn a lot about her in the next couple of episodes and where that's going."

And if you're wondering whether Pandora and Jenny's storylines are somehow connected, Greenwood insists that everything fits together and will make sense in the end. "The lines will cross at some point. The storylines will meet. Whether or not that means Pandora and Jenny will meet up, we'll see, but you'll be satisfied with the A and B stories coming together, definitely." Let's just hope our poor Jenny doesn't become one of Pandora's pawns in bringing the Witnesses down. The Mills sisters are in a good place right now, and I'd hate to see that bond unravel.