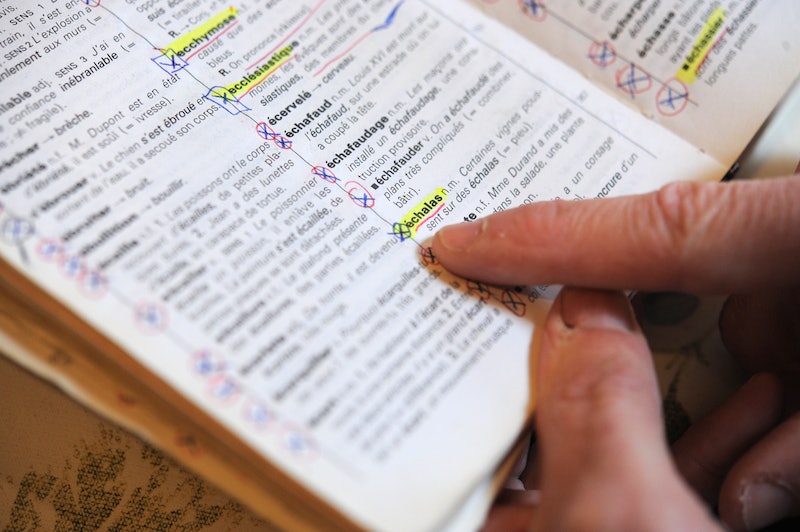 Hello, book nerds. I've got the latest and greatest list of new words added to the dictionary — the Internet dictionary, that is — and you're going to love them. Dictionary.com stays pretty far ahead of the game when it comes to slang terms. It's no Urban Dictionary, of course, but it has certainly got a better handle on words than the Oxford English Dictionary , who added the following gems just this year: half-ass, kettlebell, kryptonite, and sext. Way to be late to the party, OED. I'd slow clap for you, but you probably wouldn't get it.

As Dictionary.com observes, many of the words on its list "highlight the role of social media in transmitting and popularizing new terms, while [others] demonstrate the new ways that technological innovation is changing the way we live and speak." Today, language changes at faster rates than many of us can keep up with. One person can tweet new slang from Sweden, and it will be in the vocabulary of teens across the world within hours. Poor Gretchen Weiners should have just waited for Twitter to make fetch happen.

Fellow Bustle writer Lucia Peters already covered the addition of gender-neutral honorific "Mx." to the Internet dictionary. Here are 11 more entries that deserve to be highlighted.

Dictionary.com calls this "any factor or element that makes an otherwise outstanding achievement somewhat doubtful or less impressive." Use this one when that friend with the embellishment habit posts photos of her $10,000 engagement ring.

When you text and drink, you're going to regret it, even if the only thing you did wrong was to not catch a huge autocorrect fail. Dictionary.com feels you.

I'm honestly surprised this word wasn't in there already. For those of you not in the know, this is the word you use when you have to hold your head to keep it from exploding at someone else's incompetence.

Oh, feels. You know the feels. Like at the end of Toy Story 3, or the beginning of The Land Before Time. Dictionary.com calls feels "strong, often positive feelings," but I'm going to disagree with them on the positivity front.

Confession: I googled "fleek" several months ago. Apparently, it means to be "flawlessly styled [or] groomed." I thought we had "on point" for that. Now I'm wondering if there's a difference...

In video game terminology, to "nerf" something is to bring down its effectiveness. If your class, weapon, or spell becomes less powerful as the result of a developer tweak, you can say you've been nerfed. It's the opposite of "buff," for those who are curious.

This is an important word, y'all. Neurodiversity refers to "the variation and differences in neurological structure and function that exist among human beings, especially when viewed as being normal and natural rather than pathological." You'll hear it used a lot in discussions about autism, ADHD, and schizophrenia, among other conditions.

I hate when I have a random hair out of place. Or that one random guy can't fit the flow of traffic and ruins everyone else's commute. Did you see that random documentary on TLC last night?

There are a whole lot of problems with this term — which refers to "a person who finds intelligence to be a sexually attractive quality in others" — but it's still pretty fun to say. All it brings to my mind is Irene Adler's "brainy is the new sexy" line from Sherlock, which is fine by me.

Yaaas is a wonderful word, denoting strong agreement, approval, or excitement, such as my feelings toward the new words added to the Internet dictionary. This cat knows what's up.