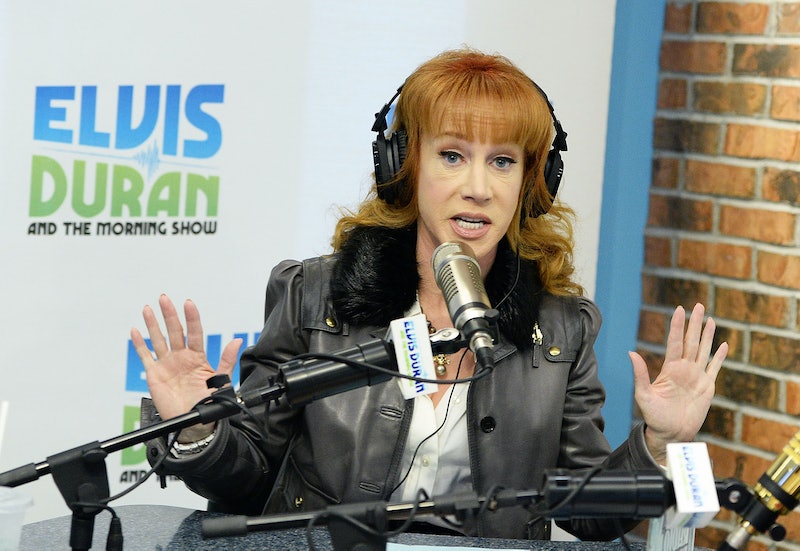 The one memory that I have of my mother and money is when I asked her how much she made. I couldn’t have been more than 10 or 11 years old, but I remember it clearly because what I felt when she answered me was something akin to shame. “You never ask somebody how much money they make,” she replied and returned to getting dinner started. My mother was a working mother, and, for most of my life, was a single mother. I’m not sure what the real reason was behind her adamancy that I not know her salary, and that I never ask what anyone else’s was — but that lesson about keeping quiet when it comes to the money you make has stuck with me. According to Kathy Griffin, though, this money mentality is the opposite of what we should be telling ourselves, especially when it comes to the gender wage gap. In an exclusive interview with Variety, Griffin talked open about how much money she has made over the years and how much it has differed from her male co-stars' salaries. And, according to Griffin, being open about what we make — that is, both men and women — is the only way we can start repairing the gender wage gap.

Talking to her co-workers about their salaries has always been something that Griffin is comfortable doing. In the interview, she said that when she was starring in Suddenly Susan, she asked everyone on the cast what they were making and she claimed she quickly learned that she was making “the second-lowest salary on the cast.” According to Griffin, Judd Nelson, who had an equal-sized role, “made four times what I made.” The difference there is staggering. Griffin isn’t even talking about the standard 22 percent more that men make on average, which InfoPlease details. She’s talking about 400 percent more.

Griffin also discussed her pay at CNN for her annual gig co-hosting the New Year’s Eve special with Anderson Cooper. That’s right: Co-hosting. And, though their onscreen time might be the same, when it comes to whether or not the two make the same amount of money for the gig, Griffin said, “Give me a break — of course not.” Even for a job where she shares the same responsibilities and the same amount of screen time as her cohost, Griffin claims she was still paid vastly less than her male counterpart.

“I think it’s part of the male industrial complex to keep women quiet about what their salaries are,” Griffin continued in the interview. When I read that, I couldn’t help but think back to that moment in the kitchen with my mother. Who had told my mother to keep her salary a secret? Was it a man who was making four times as much as she was? What would have changed for her if she had been open about what she made and unashamed to ask her co-workers?

I, for one, am totally inspired by Kathy Griffin’s outspoken candor. It’s clear that Griffin is on to something major here — after all, talking about what we make is the only way we are ever going to both identify the problem of unequal pay in our respective workplaces and work to solve it.

Bustle has reached out to both CNN and NBC in response to Griffin's claims about New Year's Eve Live With Anderson Cooper and Kathy Griffin and Suddenly Susan, but has not yet heard back from CNN. NBC returned no comment.