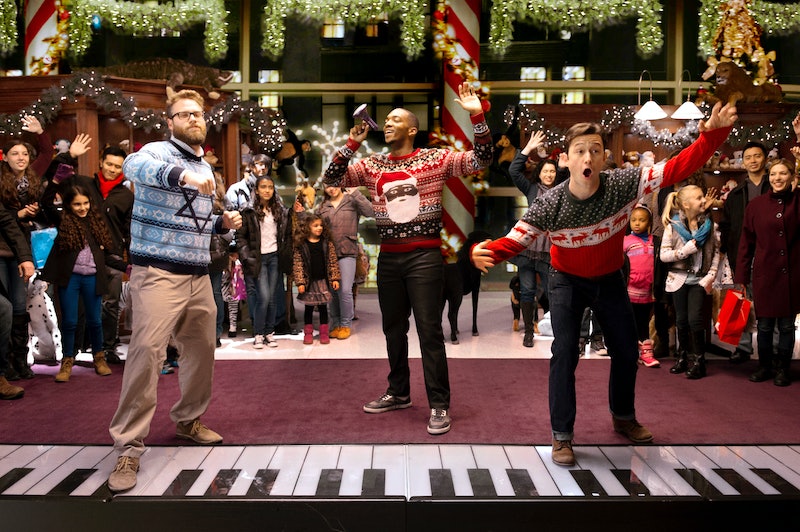 The pop culture phenomenon known as the "ugly Christmas sweater" has taken the world by storm for the past few decades, so much that people go out of their way to have parties dedicated to the ironic piece of holiday couture. The outfit choice has officially reached iconic status, because it is now the unofficial co-star of The Night Before , the best stoner holiday movie of the year starring Seth Rogen, Joseph Gordon-Levitt, and Anthony Mackie. In the trailer, the three guys are seen wearing some awesomely atrocious pieces of clothing, and unsurprisingly, people are already wondering where they can buy the The Night Before sweaters . If you're one of the many pining for this particular type of fashion, enter Tipsy Elves, the number one authority when it comes to ugly Christmas sweaters.

Started by Evan Mendelsohn and Nick Morton in 2011, Tipsy Elves has since become the go-to destination when it comes to buying the perfect ugly Xmas sweater. The two were featured on NBC's Shark Tank for their clever entrepreneurial endeavor, during which time they proved that there was an ugly Christmas sweater market and that they were the kings of it. Now, they're the only place where you can buy the exclusive collection of sweaters from The Night Before.

So when you see the movie, you can feel like you're taking part in its stars' activities. And why wouldn't you want to? In the film, Rogen, Gordon-Levitt, and Mackie play a group of reunited friends who are on the hunt to find debauchery-laden fun on Christmas Eve, and all the while, they wear their sweaters. Rogen wears one with the Star of David, JGL has one with cute moose all over it, and Mackie has one featuring a black Santa. The sweaters are awesome enough to join these movies in the "Hollywood Christmas Sweater Hall of Fame."

No one could pull off this "reindeer jumper" like Colin Firth. It is so horrible that you can't help but want one for yourself.

Having an ugly Christmas sweater is one thing, but wearing matching ugly Christmas sweaters with your family unironically takes it to a whole different level. When the Finch family dons matching snowman sweaters, they become the talk of the neighborhood. In fact, they are so hideously cool that Madison's (Alia Shawkat) friends think it's a Marc Jacobs sweater.

John C. Reilly dons the most glorious Christmas sweater complete with a spectacular aerial shot of flying reindeers and Santa. I think my mom had the same sweater in 1988.

If you need inspiration for the perfect "ugly" holiday look, reference the above movies and you are guaranteed to be the best when it comes to ugly holiday apparel.