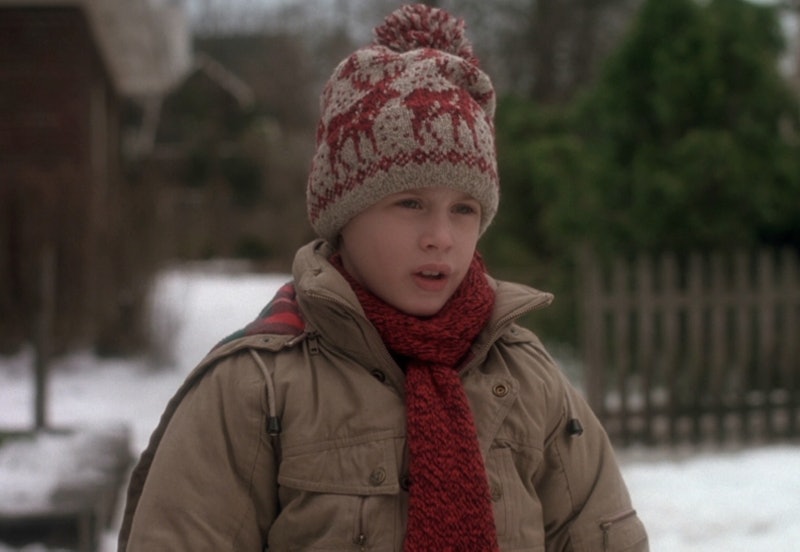 Though multiple Christmas-themed movies premiere every year, only a few stand the test of time and become real holiday classics, worthy of re-watches for decades to come. Home Alone , which celebrates its 25th anniversary on Nov. 16, is one such film. Like National Lampoon’s Christmas Vacation, A Christmas Story, or even the recent favorite Elf, the hilarious tale of Kevin McCallister being left at home by himself when his family jaunts off to Paris for Christmas is one that no holiday movie marathon would be complete without. And it's one of the most successful holiday-centric films to date; Home Alone went on to spawn sequels, inspire board games and video games, and make Culkin an absolute star. Now, 25 years later, Home Alone is still a beloved Christmas classic, watched by many every year.

But how did all of the elements of Home Alone come into place, and what were some of the challenges the cast and crew faced along the way? Here's how it all went down, according to several interviews with the movie's filmmakers and actors given over the years. Unsurprisingly, the tale of Home Alone's creation is a story just as charming and fun as the beloved movie itself.

About 25 years ago, director Chris Columbus was coming off of the failure of Heartbreak Hotel when he got a couple of scripts from John Hughes. Home Alone, with its holiday-centric themes, appealed to him immediately. “I’ve always been fascinated by Christmas, even back when I wrote Gremlins, Columbus told Entertainment Weekly this month. “Christmas is a time when people are at their happiest or at their most emotionally low place in their lives, and I thought that this is a great backdrop for a kid who’s left home alone on Christmas.”

At the time, a little boy named Macauley Culkin was a 10-year-old actor with a few minor credits to his name. Then, in 1989 Culkin starred in Uncle Buck with John Candy, and Hughes was so impressed with him that he wrote the role of Kevin specifically for Culkin. Though Hughes assured Columbus that Culkin was the one for the job, Columbus still auditioned hundreds of kids for the role, citing his own feeling of directorial responsibility. When Culkin came in, however, he knew Hughes had been right, telling EW, “Because he’s a real kid. He doesn’t look like one of these Hollywood-perfect kids. His ear is bent a little bit. He had a great voice that was not annoying, it was just charming, and he was really funny.”

Rounding out the cast was Daniel Stern and Joe Pesci as Marv and Harry, the “Wet Bandits” who raid Kevin’s home while his family is away, though Pesci’s role was reportedly offered to Robert De Niro and John Lovitz, who both turned it down.

Like many John Hughes films, Home Alone was based in the Chicago suburbs, and the house used in the film has become so famous that it’s become a tourist attraction. The house they used is located at at 671 Lincoln Avenue in Winnetka, Illinois. Columbus and his crew drove around various suburban neighborhoods until, they, like Goldilocks, found one that was just right. “It was extremely important that the house fit the gags of the movie. Particularly from a visual point of view and from a stunts point of view,” Columbus told EW. “So we needed to cast a house that would work for the stunts and also a house that was visually appealing and, if this makes sense, warm and menacing at the same time. It’s the kind of house if you were a kid it would be fun to be left home alone.”

During the shoot, Columbus and crew had no idea they were creating what would eventually become a box office record maker, but they had a lot of fun in the meantime. Pesci apparently would forget that he was not making Goodfellas and would frequently drop F-bombs on set despite the kid-centric cast, according to Mental Floss, so Columbus suggested that he try saying “fridge” instead. Then there's Pesci, who took his method acting a bit too far and, in one of the closing scenes of the film, actually bit Culkin’s finger so hard that Culkin still has a scar. According to a bit of IMDB trivia, the goofy Stern was so afraid of startling the tarantula that he opted not to scream during that infamous scene on the stairs, afraid the creature would bite him in the face. He dubbed the scream in later.

Speaking of screams, the film’s iconic after-shave scream was not written in the script, but improvised by Culkin himself. “I thought he was going to slap on the cologne and move his hands and scream,” Columbus told EW. “But on the first take, he slapped his face and kept his hands glued to his face as if he had just put superglue on his face, and his hands stayed completely still as he screamed like the Edvard Munch painting. That’s why he was such an interesting kid: No one else would have done that.”

Though John Candy shared a lot of screen time with Culkin in Uncle Buck, the two never worked together for Home Alone. In fact, Candy was only available for one day, so all of his scenes were done in a grueling 24-hour shoot. Candy also loved to improvise, and the creepy story the character tells about leaving his son in a funeral home was one of those instances where Candy let his imagination fly. “That just came out of nowhere. That was probably on hour 23 of shooting,” Columbus told EW. “We were all sort of punch drunk...the crew was just bent over laughing.”

But not everything was all fun and games. The stunts that make up the climax of the film, when the Wet Bandits are raiding the house and Kevin has essentially set up a fun house of pain, really worried Columbus. “Every time the stunt guys did one of those stunts it wasn’t funny,” he said. “We’d watch it, and I would just pray that the guys were alive. And then they would get up and they were absolutely fine, and then we would watch the playback on video and then we were relaxed enough to laugh.” The end result of Kevin’s master plan was reportedly so damaging that a practicing physician weighed in on the probable injuries that the Wet Bandits would have suffered, according to The Week. The diagnosis includes fractures, disfigurement, double vision, and Harry would have ultimately required a transplant of his skull bone.

Home Alone’s jovial, holiday-inspired score also faced a few issues. Composer Bruce Broughton was initially supposed to write the music for the film; in fact his name appears on early posters that were made. But Broughton was stuck in delays on The Rescuers Down Under. So what does one do when one lacks a composer? Why, just get Steven Spielberg to call John Williams, of course! “I had known Steven Spielberg for years," Columbus said to EW. "Steven got me in touch with John Williams’ agent, and John agreed to screen the film and he fell in love with it. His score took the movie to a different level.”

When Home Alone premiered on Nov. 16, 1990, it received mixed reviews from critics, but was an instant hit with audiences. The film stayed in theaters for months, long beyond the Christmas season, and broke box office records making $17,081,997 in 1,202 theaters. It was the highest-grossing film of the year and earned a Guinness World Record as the highest-grossing live-action comedy. And 25 years later, it's still as popular as ever, a testament to the work and love Columbus and his crew put into the making of the film.