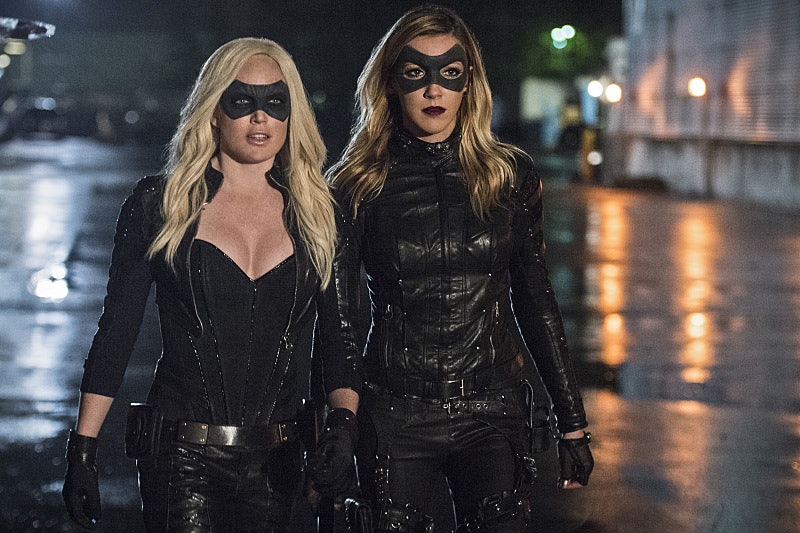 Sara Lance is on a journey on Arrow, that's for sure. When she was on her post-Lazarus Pit killing rampage, she reminded me of Helena on Orphan Black back in Season 1. Now that she is on her way to becoming an all-new hero, with the help of NBC's Constantine, we can start to investigate an all new character. Is White Canary in the Arrow comics? Caity Lotz will reprise her role in DC's Legends of Tomorrow as the White Canary, so here's what else we know about this character so far.

As it turns out, White Canary is a DC Comics character, mostly as a villain in issues of the comic book series Birds of Prey that centers on Black Canary, Oracle (Barbara Gordon), and the Huntress. She is a very mysterious one at that. The CW series is clearly carving a new path with the White Canary, with a new backstory and a new future. The White Canary is decidedly a bad guy in the comics, and I don't think Sara Lance could ever be truly evil. However, it's interesting to look at the inspiration for what is sure to become a fan favorite in the DCTV Universe. Here is what we know about the White Canary, and how some of it could be incorporated into future episodes of Arrow and DC's Legends of Tomorrow.

That's one major difference between the comics and the CW series. She was born along the Silk Highway/Road in the Saanxi Province.

Her True Name Is Unknown

It seems like Arrow seized an opportunity and took it. Sara Lance is an invention of the CW series, and since Black Canary goes by her middle name Laurel instead of Dinah on the show, have they been planning this since the pilot?

She Covers Her Face

In the comics, the White Canary also wears a mask on the lower half of her face, instead of the eye mask that Sara used as the "other" Black Canary.

She Has A Feared Family

Her father is Master Si Fu Huang, and her half-siblings formed an evil team called the Twelve Brothers. They were each born under a different zodiac sign. Their father was obsessed with legacy.

The White Canary's father habitually killed any daughter he had, but when lightning struck as he was about to off this one in a river, he took it as a sign she should live. So, that's actually pretty similar to her origin story on Arrow, in a way. Detective Lance had the opportunity to kill his own daughter, but stopped himself with Laurel's help. I guess that makes the Black Canary the lightning in that case.

Black Canary Is Her Nemesis

Dinah defeated her brothers, and the White Canary tracked them down and killed him for dishonoring their family. That's... rough. She then set out to beat Canary. She framed her for murder and kidnapped Sin, who has appeared on Arrow before, in order to get to Dinah/the Black Canary. Of course, the CW series adds a sisterly bond to this dynamic. So why Sara and Laurel may not stay enemies on Arrow, the fact that their comic book counterparts have a history makes this even more exciting going forward.