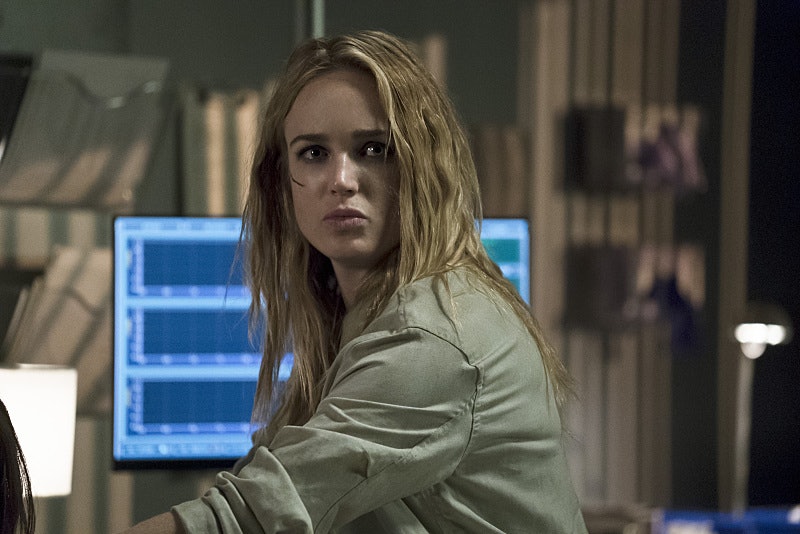 It's no spoiler to say that reanimated Arrow vigilante Sara Lance will become the White Canary. That cat got out of the bag as soon as the CW announced another DC series, a spinoff of the successful Arrow and The Flash. Sara Lance is one of the Legends Of Tomorrow on that show, which debuts mid-season. So that leaves some time for the tortured woman to locate her inner hero, but not a lot. Sara needs to become the White Canary and soon, if she's going to be a part of a new crime-fighting, time-traveling team. Unfortunately, Laurel's resurrection of her sister didn't account for the side effects of the Lazarus Pit, and Sara is barely human, let alone a crusader for good. How will this version of Sara become the White Canary?

The Lazarus Pit is still a mystery, as Malcolm warned Laurel and Thea before Laurel tried its magic on her sister. Thea is still coping with the after-effects of her own rebirth. In helping her out with her violent urges, Malcolm subscribes to the policy of "better out than in." He delivers some League henchmen to her Nanda Parbat chamber so that she can work out some of her lingering bloodlust. This isn't the kind of solution that Thea is seeking, but no other answer has been offered. And she was only dead for a day before the Pit did its number on her. Sara had been gone for over a year — join me in cringing at the memory of her desiccated body in her coffin — no wonder her symptoms are worse.

But Sara Lance won't be chained up to a pipe in the dark forever. In fact, she's already flown her sister's negative five-star accommodations to disappear into Star City. The network's synopsis for Wednesday's episode, "Haunted," declares that Sara's situation will "take a turn for the worse." That's when Oliver calls in demon hunter John Constantine, a remnant of his own failed series. Constantine has more experience with the supernatural and the occult than Team Arrow does, and intends to perform a "restoration of [Sara's] soul to her body." "What if something goes wrong?" Diggle wants to know in the episode trailer below. "Then we'll all be too dead to care," Constantine answers.

If Constantine's method works, then surely it'll work on Thea as well, right? But doesn't that seem like an easy wrap up for a show like Arrow? I anticipate that something will go wrong, and the soul restoration won't be 100 percent successful. The genesis of the White Canary might be partially thanks to the Lazarus Pit itself, based on this quote that John Barrowman (Merlyn) gave to Entertainment Weekly about its powers.

Everybody comes out of the pit different. People come out with a bit of every soul that has been put in the pit before. Some parts of those souls take over. Thea’s got a bloodlust. Damien Darhk’s got something else. What will Sara come out with?

A. Damien Darhk, you say? Intriguing. B. What if Sara actually picked up some good in the Lazarus Pit, either from Thea or someone else? Maybe it's lying dormant now, but Constantine's ritual will help Sara access her inner goodness. If there's some kind of inherent, supernatural purity in her now, that would earn the White Canary mantle, wouldn't it?

The Lazarus Pit might not be all bad, at least in the case of Sara Lance 2.0.