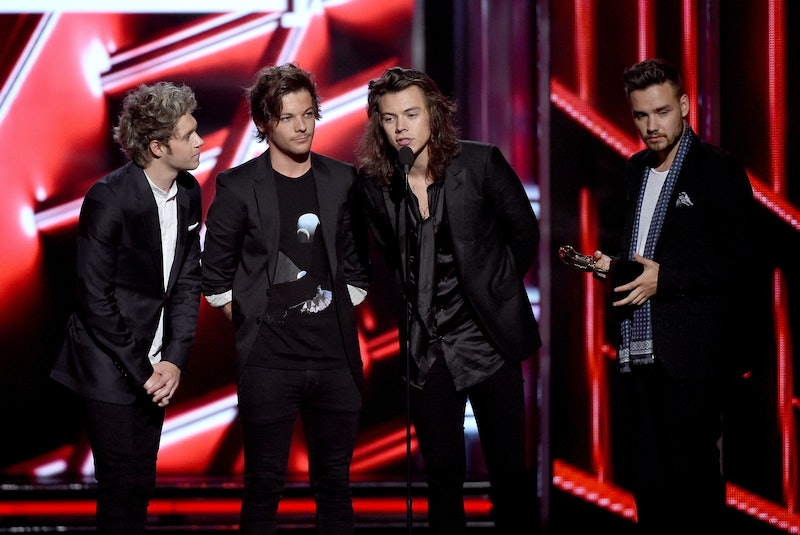 One Direction is dropping amazing track after amazing track and I don't hate it one bit. The latest Made in the A.M. song to grace our lives is "Love You Goodbye," a One Direction power ballad for the ages. Seriously, this one will have you silently weeping from the heartache alone, so grab a pint of Ben & Jerry's and buckle up.

While speaking with Entertainment Weekly, Louis Tomlinson explained the meaning behind "Love You Goodbye," saying, "I think it’s kind of like when … how to put this? When you come to the end of a relationship and you always find yourself seeing that person one last time. It’s that moment ... If you can read between the lines." In case you can't read between the lines, here's a hint from the lyrics: "One more taste of your lips just to bring me back / To the places we've been and the nights we've had / Because if this is it then at least we could end it right."

Even though the song commemorates a breakup, there's definitely a bittersweet quality to it. "It's inevitable everything that's good comes to an end," they sing. "It's impossible to know if after this we can still be friends, yeah." Another key lyric: "Oh, why you're wearing that to walk out of my life?" The heartbreak is palpable, guys.

While the end of a relationship might be inescapable, that doesn't lessen the significance of the time the two spent together. One Direction also touch on this in the most poignant of ways, saying, "Unforgettable together held the whole world in our hands / Unexplainable the love that only we could understand, yeah / I know there's nothing I can do to change it / But is this something that could be negotiated / My heart's already breaking, baby, go on, twist the knife."

Directioners, the inevitable hiatus is hitting us all differently, but at least we have songs like these in which we can pour out our emotion and cry like we did the first time we saw the band in concert.