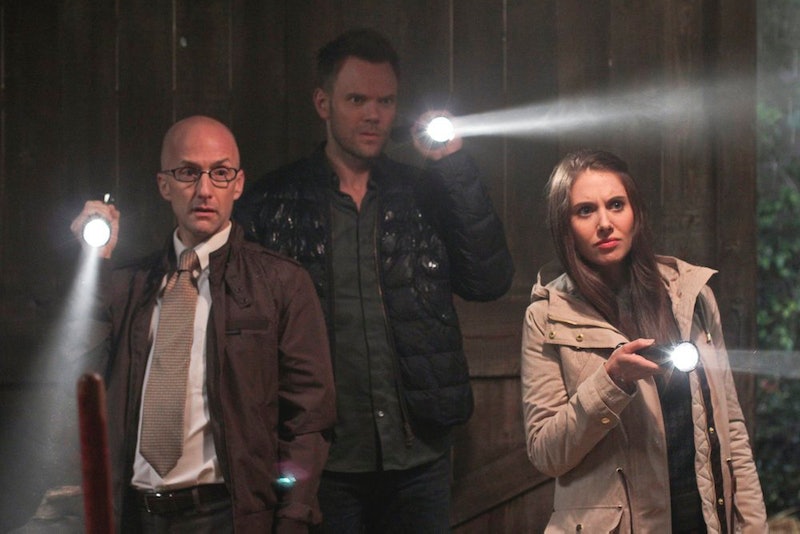 This is how we know Community is really back: It did a genre-spoof episode. The very fact that this kind of episode requires so much attention to detail makes it impressive, and combined with the show's sharp comic chops means that these episodes are usually some of the best of the season.

While "Basic Intergluteal Numismatics" fulfills these standards, a lot of its humor relies on the goofiness of its premise: The episode is a serial killer movie spoof in which Jeff and Annie try to track down the "Ass Crack Bandit," a dastardly criminal who keeps putting coins into people's exposed ass cracks at Greendale. Of course, the touchstones of the genre are all there: there's an attempted cover-up by the administration, a montage of newspaper clippings, a press conference, nonstop rain, a dead end, someone falsely turning themselves in, one of the investigators being cornered by the potential "killer," and the entire episode is shot with a spooky blue-green tinge. But the best part is the episode's unsolved mystery (well, that and a random guest appearance from Ben Folds). In the episode's final moments, a cinematic song about the "Ass Crack Bandit" plays while scenes suggest multiple people to be the bandit.

This isn't Community's first time at the genre spoof rodeo, but it's significant because it's the show's first time back on the horse. The show did virtually no spoof episodes in its fourth, Dan Harmon-less season, and we all know how that went. So how does the fifth season's first spoof compare to previous seasons?