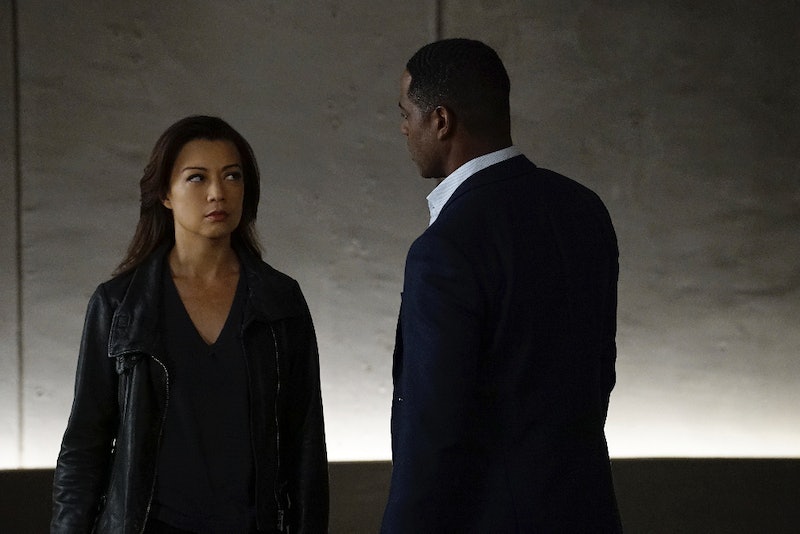 The philosophical debate about whether or not Inhumans are to be feared or nurtured got even more twisted on Agents of S.H.I.E.L.D. this week. How could they not, when it turns out that one of the biggest threats to Inhumans just happens to be one himself. We learned last Tuesday that Andrew Garner is Lash on Agents of S.H.I.E.L.D. — but we didn't know that he was consciously killing his own people because he deemed them dangerous. Pretty sure he's the more dangerous one, but whatever. It wasn't a Hulk-type scenario, in which Andrew lost control completely. He had instincts, but the Terrigen was affecting his personal philosophy as well.

Early in the episode, Daisy expressed her discontent with the ATCU's treatment of Inhumans and the "gel matrix" they were using to keep them in stasis. Rosalind Price countered with the reality that for every "good" Inhuman like her and Lincoln, there are monsters like Lash. While May, who was keeping what she learned about her ex-husband a secret from Bobbi Morse, went after Andrew herself, Lincoln came to S.H.I.E.L.D. with information about Lash. Lincoln knew that the only way Lash would have been able to track down the Inhumans that he had killed was if he had Jiaying's ledger, which S.H.I.E.L.D. confiscated and gave to Andrew Garner for his research. In fact, it was that very book that — thanks to Terrigen in the cover — triggered Andrew's Inhuman transformation in the first place.

Of course, this is partially tragic because Andrew Garner studied and respected gifted individuals such as Inhumans. It is disappointing that the very thing he studied made him go against his own beliefs. Ultimately, Agent May was able to talk him down and contain him while in human form — though she admitted to Coulson that she was prepared to take him down in the process.

The episode was bookmarked by two scenes in which Andrew and Melinda enjoy a vacation in Hawaii, not realizing that these would probably be the last happy moments they ever have together. Between that and all the FitzSimmons scenes, this was a heartbreaking episode. (I'm not a math genius and this is a complicated situation but "I was as clear-headed then as I've ever been, what do you think we should we do about it" = "KISS ME," Fitz! But yeah, sunrises are cool too. Take your time.) It was just not a great day for romance all around. True, Bobbi and Hunter seem to be going strong, but I have a feeling Coulson is going to be regretting his choices pretty soon. At least May and Andrew got to go on vacation at all. Lash is going into one of those little jello coffins, and hopefully Agents of S.H.I.E.L.D. will be able to find a way to help him before long.