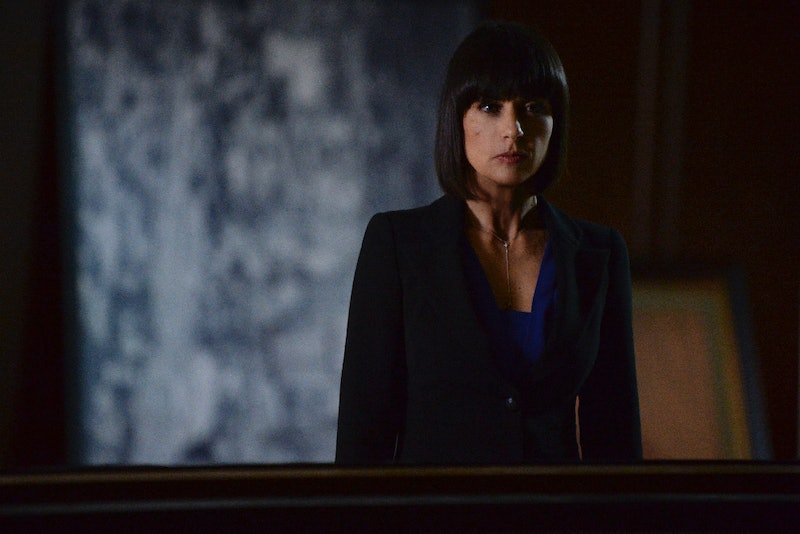 Just as soon as we'd let our guard down and stopped assuming that secret Hydra agents were hiding under the bed, Agents of S.H.I.E.L.D. surprised us yet again. The Advanced Threat Containment Unit was just starting to look like the good guys. Then, Tuesday's episode revealed that ATCU leader Rosalind Price may be Hydra on Agents of S.H.I.E.L.D. and is definitely working with the malicious Hydra ally/former World Security Council member Gideon Malick.

Look, I never trusted Rosalind Price, and that's on record. However, I didn't think she was going to turn out to be pure evil. At the end of the episode, Grant Ward was chilling fireside with Malick, discussing the aftermath of the attack on Werner Von Strucker over drinks. Ward revealed his plan to "cut off S.H.I.E.D.'s head" by killing Coulson. Ward wanting to kill his former boss is an understandable endgame, but the idea that it would bring down the organization is an unrealistic result. I'm sorry, but since the Avengers aren't even cleared to know that Director Coulson is alive, I think S.H.I.E.L.D. would theoretically do just fine without him.

So, in a way I'm almost glad that Grant Ward's conversation with Malick was cut off by a phone call from Price. She apologized for missing a meeting, and seemed to imply that she would be bringing Coulson to Malick herself. I haven't been too on board with the ACTU and this political conflict about how to not treat Inhumans inhumanely (say that five times fast), so this reveal was a thrill to me. Is she working alone, or is Gideon Malick involved in the ATCU? What do they want with Coulson that's "bigger" than taking down S.H.I.E.L.D. or studying the effects that multiple close encounters of the alien kind have had on him?

Not only that, but now Rosalind is officially sleeping with Phil Coulson to boot. These S.H.I.E.L.D. agents really need to stop falling for Hydra agents. When will they ever learn?