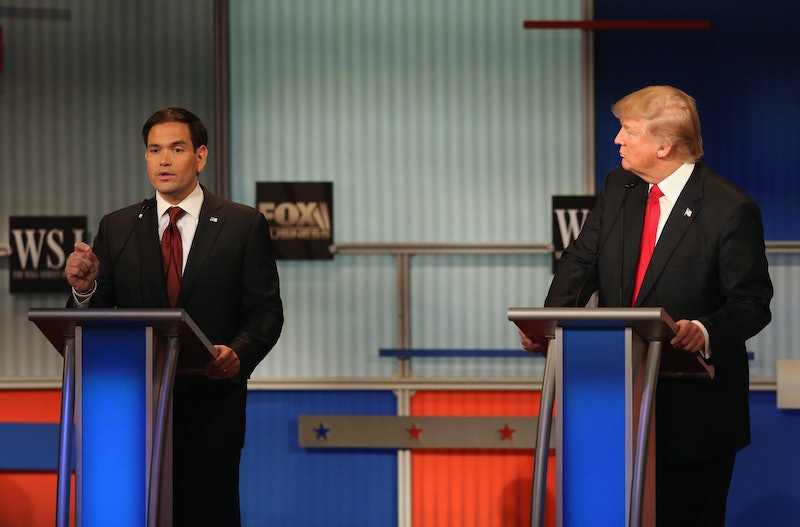 At the special Jeopardy! edition of the fourth GOP debate Tuesday night, things got off to an unusually subdued start. Sure, former Gov. Jeb Bush was already acting like the dude who won't let you break up with him (and is just getting all bitter about it by telling you how you aren't making enough time for him anymore), and sure, Donald Trump and Ben Carson told us they wouldn't raise the minimum wage because god forbid, but it had been nearly 10 minutes without a properly ridiculous soundbite — a new record for a Republican debate, surely. That's when Republican presidential candidate Marco Rubio came to the rescue, saying that he believes vocational school hasn't been emphasized enough, adding "welders make more money than philosophers. We need more welders and less philosophers."

Cue Twitter's saliva. While it was the first true memorable soundbite of the night, it's actually not the first time Rubio's used a variation of the same dig at philosophers. Back in August, he spoke to a crowd at the Iowa State Fair and advised students "So you can decide whether it's worth borrowing $50,000 to major in Greek philosophy. Because after all, the market for Greek philosophers has been very tight for 2,000 years."

Rubio was misguided then — and now. "Examples of philosophy majors' success in the business world include Overstock.com CEO Patrick Byrne, Flickr co-founder Stewart Butterfield, and Carly Fiorina, former Hewlett-Packard CEO and one of Rubio's rivals for the Republican presidential nomination," Amy E. Ferrer, executive director of the American Philosophical Association told Inside Higher Ed in response back in August. Philosophy majors are also, apparently, increasingly sought after by tech and business companies, and outperform most other majors on their LSAT and GRE, Ferrer adds. And as Twitter will happily point out to you below, they also happen to make more money.