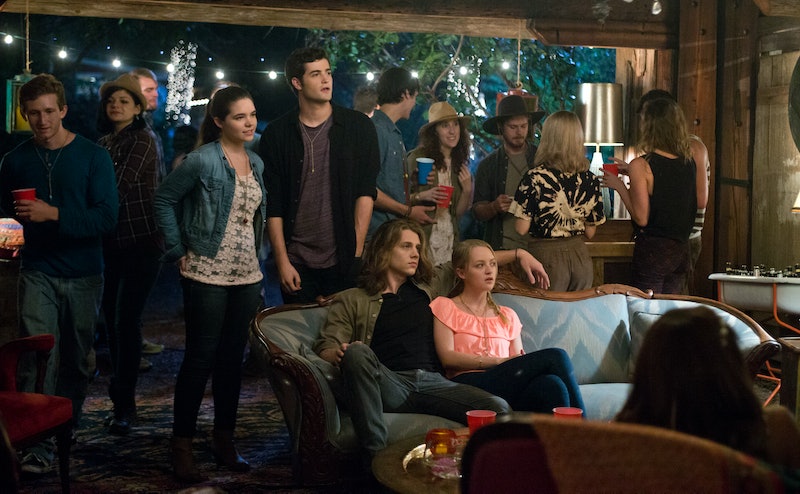 As always, a lot of things went wrong on Tuesday night's Finding Carter — Carter's date went awry, she lied to Elizabeth, and Ben's foster sister partied a bit hard — but, again, as always, Max was a saving grace. During last week's episode, Taylor was drugged during a college visit on Finding Carter and was almost raped at a party. Which, in itself, was a challenging storyline to see even if Gabe managed to get her out of there at the right time, but it was even more difficult to watch Taylor feel so ashamed that she couldn't tell Max about it. But, finally, after pushing him so far away that it physically hurt my being, Taylor opened up to Max on Tuesday night and, unsurprisingly, he told her exactly what she needed to hear.

Here's the thing about Finding Carter — every fan knows that Max is the ultimate cinnamon roll and that, even at his worst, he's got a perspective that's important and rational. How else could he have transitioned from being a friend from Carter's old life with Lori to being a friend (and boyfriend to Taylor) in Carter's new life with the Wilsons? It wasn't difficult to understand how and why Taylor blamed herself for what happened during the college visit, nor was it hard to understand why she was worried about telling Max — but, when she finally opened up to him during the house concert (do these things actually exist?) on Tuesday, his response couldn't have been more perfect.

Taylor clearly spent most of the time between last Tuesday's events and this week's episode avoiding Max and she spent most of the concert avoiding him as well until it was obvious that she was hurting him and, unfortunately, making him think that she'd suddenly decided that she had feelings for Gabe. When she finally opened up later on about feeling ashamed for not finding out about what happened until much later, Max said exactly what every fan knew/hoped he would say: "It wasn't your fault." That seems obvious — Taylor didn't drug herself, nothing about what happened/almost happened to her was her fault. But, somehow, hearing Max say it out loud was a relief for her and, honestly, a relief for me as well. I never doubted him for a second — Finding Carter has already put Max through so much and established the fact that he's an incredibly informed and special character, but when the wall Taylor had built around herself melted, my heart did also.

It would've been very easy for him to panic about the idea of his girlfriend going away to college after an experience like this, but he remained supportive and selfless. If that's not a sign that Maxlor is an OTP that only makes each other better, I don't know what is.